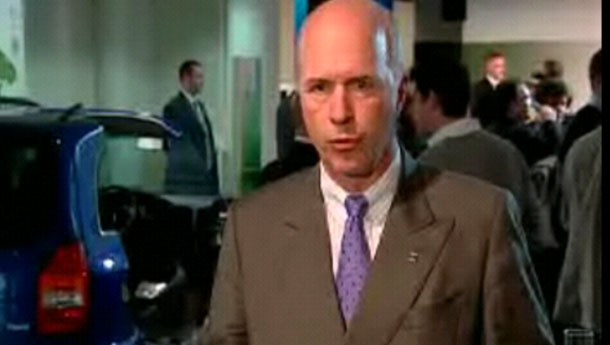 The 55-year-old German chose the second option because of the challenge the job offers. After all, it’s not often that one gets the opportunity to make a 65-year-old small-by-global-standards company a truly international entity.

Forster must be glad he accepted the Tata Motors job for another reason. As president of General Motors Europe, he had supported the sale of Opel to a consortium led by Canadian firm Magna. GM’s top management had agreed to the proposal but backed out at the last minute.

In a public statement, Foster termed the sudden shift in stance “incomprehensible”. A day later, GM confirmed that Forster would be quitting.

Forster, who has been staying at Mumbai’s Taj Mahal Hotel and is planning to bring his family soon, is a global citizen — almost literally. He was born in London, raised in Bonn and Athens and has worked across the globe. India was the missing link. His three children are studying in different parts of the globe.

An degree holder in economics from Bnn University and in aviation and space technology from the Munich University of Technology, Forster made his name at the cult German auto brand Bayerische Motoren Werke (better known as BMW) in the 1990s. He joined BMW in 1986 after quitting McKinsey where he had worked as a consultant since 1982.

He was head of production at BMW during its ill-fated ownership of MG Rover and Land Rover (both British brands). Forster quit BMW in 2000 when the luxury brand decided to cut “excess flab” and get rid of its “English patients”.

Like most executives in BMW who were on their way out, Forster also joined GM, then the world’s largest automotive company. Subsequently, he was given responsibility for the lengthy restructuring of Opel and Vauxhall where plants were closed to cut costs. GM widely acknowledged that the Opel brand had made tremendous success under Forster’s tenure.

Forster’s surprise appointment at Tata Motors is aimed at making the company a global automotive brand — something Tata Group Chairman Ratan Tata has been trying hard to achieve for the past few years. His first task obviously would be to lead the complicated restructuring process of Jaguar Land Rover (JLR).

With almost 65 per cent of its Rs 75,000 crore revenue now coming from overseas operations, Tata needed somebody who has loads of experience in the global automotive play.

True, the challenges of steering JLR, which already enjoys a premium badge in the international market, are not as grave as they were at Opel. But other equally demanding issues like a cost squeeze and sensitive labour issues at the two UK-based brands will test the boundaries at JLR.

Tata Motors failure to resolve the pension and labour issues was one of the reasons unofficially specified for the abrupt exit of David Smith, who was CEO of the two brands before he quit in the final week of last month.

The company is looking at phasing out one of the JLR plants by 2015 to streamline operations, which will perhaps result in huge savings. This could mean possible retrenchment as the JLR management has already declined to provide any guarantee to 8,000 employees only beyond 2015.

Besides, JLR, Forster will also have to steer some important forthcoming events at Tata Motors, including the marketing and promotion of the World Truck, which will start making several international debuts over the next one year.

Further, the company’s mini car Nano, which will sport a re-designed look, will enter the US market in the next three years. Tata Motors is currently working on various aspects of the car such as a diesel and hybrid options to name a few. Besides, the company is also gearing up to launch the electric version of the Indica hatchback in Europe next year.

Forster’s only public appearance in India so far was at the Delhi Defence Expo last week. And Tata Motors doesn’t even have his photograph or resume to share with the media. But all that is surely going to change looking at the task ahead.