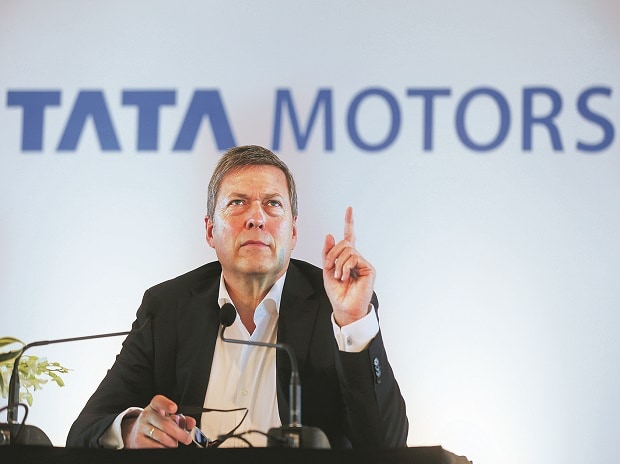 Without the one-time gain that came from changes in JLR’s pension plans, the company would have reported a loss on forex impact. The performance is, therefore, below analysts’ expectations of Rs 1,415-1,480 crore.

“Consolidated profit for the quarter was lower by Rs 793 crore due to translation impact from British pound to rupee,” the company said in its filing. Income for the quarter declined 9.59 per cent to Rs 59,972 crore, as its operating performance was hit by lower wholesale volume sales of Jaguar Land Rover, excluding sales from the group’s China joint venture, and a slowdown in its heavy vehicle business, among other factors.

The standalone business (which primarily includes the domestic commercial and passenger vehicle) remained in the red, like in last few quarters. The loss here was Rs 467 crore, against Rs 26 crore profit in the corresponding period of the previous financial year. Sales declined over 11 per cent to Rs 9,207 crore. Volumes sold (including exports) of commercial and passenger vehicles for the quarter stood at 111,860 units, down 11.8 per cent. The decline was mainly on account of 35 per cent drop in sales of medium and heavy commercial vehicles, though the passenger vehicle business posted a growth of 4.7 per cent.

“While the first quarter results have not met our expectations, we are working with renewed focus and energy to improve performance of our commercial and passenger vehicle businesses,” Guenter Butschek, managing director and chief executive officer, said.

Outside the standalone business, JLR’s revenue increased by 5 per cent to £5.6 billion. Its profit before tax rose 49 per cent to £595 million due to gains from pension plans. JLR retailed 37,463 units in the quarter, up 3.5 per cent.

JLR CEO Ralf Speth said: “We continue to deliver rising volumes and revenues across the business, reflecting strong demand for new models such as the Range Rover Velar and established global award winners such as Jaguar F-PACE.”

“Tata Motors reported weak set of numbers — below ours as well as consensus expectations. Margin pressures in both the standalone business (due to declining volumes and heightened discounting) and JLR (on account of higher material costs and variable marketing expenses particularly in the US market) led to operating profit almost halving on a year-on-year basis. We maintain our neutral view on the stock,” said Bharat Gianani, research analyst (auto/auto ancillaries), Sharekhan.