Net profit fell to Rs 2,260 crore from the Rs 5,254 crore in the same quarter a year before, missing analysts' estimate. A Bloomberg poll of the latter had estimated net profit at Rs 2,533 crore.

The margins of its luxury vehicle arm, Jaguar Land Rover (JLR), took a beating after the adverse movement of the British pound, hit by the Brexit referendum outcome. Lower incentives from the Chinese government also hit the two brands, as well as lower margins from the Jaguar XE.

Sales at the consolidated level rose 10 per cent to Rs 67,056 crore from Rs 61,510 crore in the same quarter last year. Earnings before interest, taxes, depreciation and amortisation (Ebitda) margin at this level declined to 12.9 per cent, from 19.4 per cent a year before.

Higher volumes in both the standalone and JLR business were more than offset by the adverse forex impact of Rs 2,296 crore and adverse commodity derivatives impact of Rs 167 crore in operating profit, mainly in the JLR business, the company said.

Mihir Jhaveri, director?institutional research, Religare Capital Markets, said: "Overall adjusted profit after tax (PAT, consolidated) came in below our estimate of Rs 2,390 crore. While consolidated top line (revenue) was largely in line with our estimates, PAT was lower due to weaker operating performance of other subsidiaries." 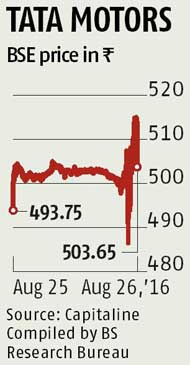 The company received Rs 478 crore in insurance compensation for the loss of its vehicles due to the industrial fire at the Tianjin (China) port last year.

Operations at the standalone level were in the black, largely due to dividend income from subsidiaries. Net profit of the Mumbai-based automobile major plunged 91 per cent to Rs 26 crore, against Rs 290 crore in the same quarter last year. Higher employee benefit and depreciation & amortisation expenses hit the company.

Dividend received from subsidiaries rose seven per cent to Rs 625 crore, as against Rs 583 crore for the same quarter last year. Income from operations at the standalone level jumped to Rs 11,465 crore, up 10 per cent from Rs 10,400 crore during the same period last year.

The board of directors approved the raising of funds by way of issue of secured and unsecured debentures and/or bonds aggregating Rs 3,000 crore in one or more tranches.