Tata Motors’ prospects are on an upward trend and this could also help mark a reversal in the underperformance of its stock, which has not only lagged its listed peers such as Maruti and Mahindra & Mahindra (M&M), but also the broader S&P BSE Sensex in the past one year.


The improvement in prospects is visible in the recovery in Jaguar Land Rover (JLR) sales as well as market share gains in the domestic medium and heavy commercial vehicles (M&HCVs) and passenger vehicles segments. JLR, the UK-based subsidiary of the company, reported a 10 per cent gain in retail volumes after five months of lower-than-expected sales, due to higher volumes for the new Discovery and Range Rover Velar models.


While sales for JLR in the fiscal year-to-date have been 4.5 per cent, most analysts peg the FY18 sales number closer to the 10 per cent-mark on the back of three new sports utility vehicle models, Velar, Discovery and E-Pace. Analysts at Macquarie expect margins of the company to rise on the back of improving product mix, higher volumes and rolling off of unfavourable forex hedges. The Tata Motors’ management has guided for a medium-term margin target of 8-10 per cent at the profit before interest and tax level for JLR. 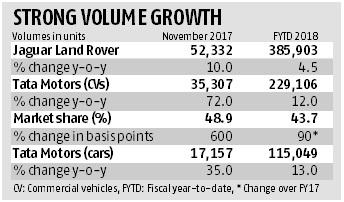 The improvement in the domestic operations led by commercial vehicle (CV) volumes is another trigger. In line with its intention of gaining 500-basis point (bp) market share in FY18 in CVs, Tata Motors has been aggressively rolling out new products and gaining traction, especially in the heavy truck segment which is witnessing high demand. The company reported a 72 per cent growth year-on-year (y-o-y) in CV sales on the back of increasing acceptance of Tata Motors’ selective catalytic technology, infrastructure development led by government funding and restrictions on overloading by truck operators. The company indicated that production ramp-up of the new range of BS-IV vehicles and launches such as the Xenon Yodha pick-up have also helped boost sales growth and resulted in market share gains. 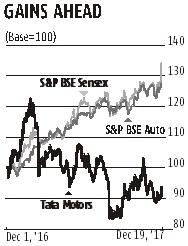 Analysts at Nomura believe there are further upsides to the 10-15 per cent industry growth estimates for the next two fiscal years, given the Indian government’s focus on doubling spend on building roads over FY18-20 as compared to FY15-17. Strong double-digit growth in CVs will benefit Tata Motors, which has filled in the product gaps in its portfolio, especially in the more profitable higher end of the heavy duty truck market.


The company’s passenger vehicles segment, too, recorded a strong 35 per cent y-o-y increase in sales volume as demand for the newly launched compact crossover, Nexon, remains strong. In fact, new vehicle launches have helped the company edge past M&M as the third largest passenger vehicles company in domestic volumes. Analysts expect the growth trend to continue for the rest of the fiscal year for Tata Motors, which has posted a 15 per cent growth in passenger vehicles for the first eight months of FY18.


While brokerages agree that the company’s strategy of regaining its lost market share — especially in CVs — is the right one, it could have some bearing on profitability. Analysts at Morgan Stanley believe the market share focus could keep margins muted and losses would continue for the standalone operations. The company, however, hopes to hit break-even for its Indian operations at the profit before tax level in FY18. If it does, expect Street sentiment to get a boost. Going into FY19, too, volumes for both the India business and JLR are expected to remain healthy, led by existing products as well as those in the pipeline.


At the current price, the stock is trading at a reasonable eight times its FY19 estimates with JLR accounting for 90 per cent of the stock’s value.