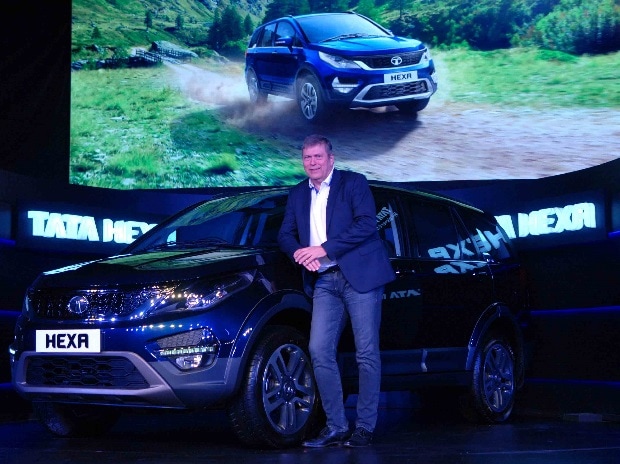 Tata Motors, struggling with its passenger car business for many years now, on Wednesday launched the much-awaited SUV, the Hexa, positioning it as a lifestyle off- roader with an attractive pricing of Rs 12.08 lakh and upwards.

Given the introductory pricing that goes up to Rs 17.43 lakh for the top-end automatic version, the all new Hexa, which has been in the making for the past two years, is set to give a tough fight to the likes of the industry leader Innova, Mahindra XUV 500, Maruti's Ertgia among others.

The Hexa, mounted on 2.2 liter diesel engine and being produced from Tata Motors' flagship Pune plant, comes in six variants - three each in manual and automatic options and offers an ARAI-certified fuel efficiency of 14.4 kmpl.

The Hexa is the fourth model and the first all new SUV under its revival plan tagged as HorizonNext strategy launched around five years ago.

Based on Tata Motors' 'Impact Design' philosophy which uses elements created across Tata Motors Design studios in Britain, Italy and India, the Hexa is the second model from this platform after the highly successful compact car Tiago launched last April.

Explaining the rationale behind positioning the Hexa as a lifestyle SUV, Mayank Pareek, Tata Motors President for passenger cars business unit, told PTI, "We want to break the clutter. There are so many vehicles in the market that claim to be SUVs/UVs. With the Hexa we want to give both the feel of an SUV and the comfort and style of a sedan."

Butschek said the company will be discounting its another SUV Aria with the launch of the Hexa, but affirmed his confidence in the Safari, saying it is notching up over 12,000 units a year. He also pointed to the popularity of the SUV to the 3000 units order from the Army recently.

It is also available in automatic transmission variant offering the first-in-segment 'Super Drive Modes' for enhanced ride comfort and stability over different terrains.

The Hexa also comes with 10 speakers exclusively developed by Harman with the from ConnectNext infotainment system.