Tata Motors expects the ongoing financial year to be tough for the truck market and sees it ending the year with single-digit growth. This comes ahead of a transition  to BSVI emission norms, lower freight volume and liquidity crisis, a top company official said.

But the maker of Ultra and Prima range of trucks is looking to outperform the broader market. It seeks to reap benefits from a relatively young product portfolio that can address varied applications, said Girish Wagh, president, commercial vehicles (CV) business, after the firm’s fourth quarter results. Wagh’s confidence stems from an improved performance of the CV business in terms of volumes, margins and market share in fiscal 2018-19.

The CV business is the cash-cow of Tata Motors’ domestic business and contributes three of every four rupees earned by the company. During the year, Tata Motors market share inched up in three of the four segments of CVs.

It also saw the volumes in these segments advance at a brisk pace year-on-year. Even in a year marked by strong headwinds, it managed to retain Ebitda (earnings before interest, tax, depreciation and ammortisation) to 11 per cent. It was 11.1 per cent in FY18. Wagh attributed it to IMPACT, an internal savings project, and operational leverage.

“We have a product for every node that offers better operating economics. It has helped in improving our margins and market share. Overall, it was a good year,” said Wagh, adding that almost all models in the MHCV line-up have gone through various changes. 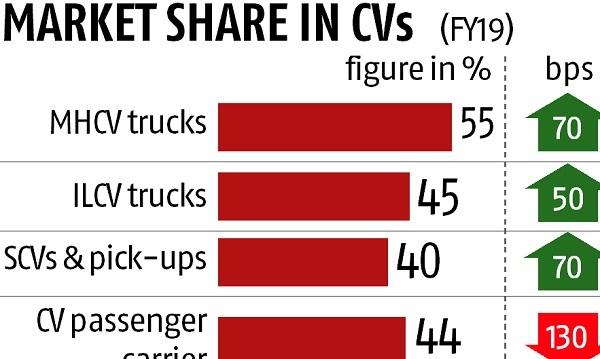 Bharat Gianani, analyst at Sharekhan, said the company’s margins in the truck business will remain under pressure. “Given the high discounts in the market and cut throat competition for market share, sustaining margins will be tough.”


India's truck market is seeing a broad-based slowdown which took effect in October last year with implementation of the new axle norms, which legitimised higher payload on the existing range by 12 to 24 per cent. This led to an excess capacity at a time when overall consumption slowed, factory output shrank and infra projects, which were fuelling tipper sales, sputtered.


An increase in global crude prices around the same time and a liquidity crisis that followed the troubles at IL&FS further dented the market.


After a strong first half, MHCV sales hit the slow lane, ending FY19 on a muted note. A total of 39,612 units of MHCVs were sold in FY19 against 36,117 units a year ago, said the Society of Indian Automobile Manufacturers. It dropped 14 per cent year-on-year in April.


SP Singh, senior fellow at Indian Foundation of Transport Research and Training (IFTRT) warned that the situation in the transport sector can worsen in the months ahead. The purchase of MHCVs is getting postponed till next quarter-end and there are significant delinquencies building up with CV financiers, he said.


“Not only has market load dropped sharply since last month, but also fleet employment in infrastructure projects have dwindled. Hence, repayment to fleet owners from big infrastructure companies is getting delayed with credit jumping to 60-90 days from 30 days,” said Singh.


Wagh agreed. “We are getting into a very unique year (FY19-20) where in the stock has to be zero.  As a result, while there will be growth in retail, the off-take or deliveries to dealers will be muted which is what gets reported.  Therefore, one will see a single digit growth in wholesale.” Volumes are likely to see a spurt in the pre-changeover phase as buyers advance purchases to beat the price hike that is expected in BSVI vehicles, said Wagh. A lot will depend on macro-economic factors playing out favourably, he said.


The market will have to consume the new product plus the existing ones at a pace higher than last year, he added.