JLR has made a strong comeback in China where sales during the recently concluded quarter stood at 12,532 vehicles. However, it is far lower than historical highs of over 23,000 vehicles in a quarter.

ALSO READ: Tata JLR crosses 500,000 vehicles mark
JLR has marked a strong comeback in China where sales (wholesale) during the recently concluded quarter stood at 12,532 units. However, is it still much lower than its historical highs of more than 23,000 units per quarter.

Ralph Speth, chief executive, Jaguar Land Rover said: “China is coming back. We had last year a lot of vehicle model changes, the runout of vehicles. There was ramp up production in China. The locally produced vehicles as Range Rover Evoque and the Discovery Sport have a high quality and this how sales are really coming up.”

JLR will enter a high-margin chauffeur-driven luxury sedan segment in China with the planned launch of long wheel-base version of the Jaguar XF in the coming days. Jaguar’s competition Mercedes-Benz, Audi and BMW also have stretched limousines running on Chinese roads.

“We are going to launch XF long wheel base which is based on the very first aluminium body shop in China. So, we have now the XF launch and we are also continuing to ramp up the Evoque and also the Discovery Sport. So, it becomes now really an interesting business (in China)," added Speth. 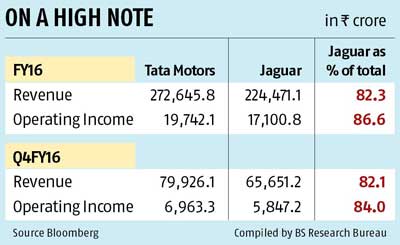 Located north of Shanghai, Tata Motors and Chery Automobile made an investment of Pound 1.1 billion (Rs 10,800 crore) to set up a 130,000-unit per year vehicle assembly plant, which became operational in October 2014.

On the capital expenditure (capex) front JLR is upping the ante with a near 20% increase this year. The two brands intend to spend Pound 3.8 billion (Rs 37,500 crore) this year on new vehicle development, product engineering and new capacity creation. Last financial year it spent Pound 3.2 billion (Rs 31,500 crore) as capex.

At the standalone level Tata Motors too will see a substantial increase in spending this year. Capital expenditure earmarked for this year stands at Rs 3,500-4,000 crore up from around Rs 3,000 crore during the last few years. The company is gearing up to launch a compact sedan (code-named Kite 5), compact sports utility vehicle Nexon and a lifestyle SUV Hexa later this year.

C Ramakrishnan, group chief financial officer, Tata Motors said: “On Tata Motors standalone, historically, if you take the last three four years, our annual spend has been between Rs 3,000 to Rs 3,500 crores. It is slightly higher in the coming years, would be around Rs 3,500 to Rs 4,000 crores, that’s order of magnitude. In terms of funding, I think it should be borrowing neutral in terms of funding in Tata Motors, that’s what we expect."