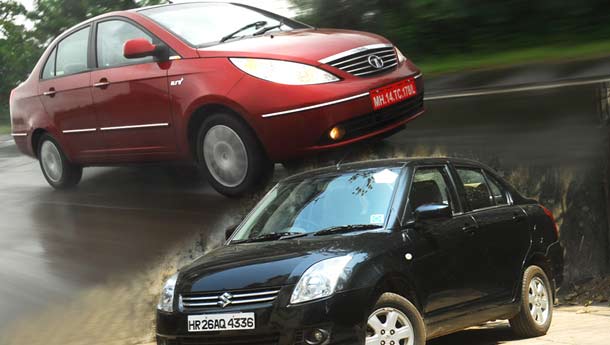 With the Maruti Suzuki Swift Dzire enjoying a waiting period of up to five months, it took one launch to bring the mighty Dzire to some sense of reality. Tata's new kid on the block, the Indigo Manza could very well have done without the Indigo moniker. Yet that doesn't take away from the fact that the Manza is a big leap forward for Tata Motors. For one, Tata has left the job of  'engine'eering to Fiat and in return they now have two very decent motors under the hood of the Manza. The Quadrajet 90+ has enough grunt to take the Manza past 160 kph with ease, though it suffers from some turbo lag at low rpm. The Safire petrol is a refined unit that musters decent acceleration as well as driveability, with well chosen gear ratios. Not only is the Indigo Manza a better looking and finished car, it's also well loaded with features like the Blue Tooth music system with audio controls on the steering wheel, a digital real time tripmeter and safety kit like airbags and ABS on the higher end versions. Space isn't a constraint either with ample legroom at the front and rear, and enough space for five persons to fit in.

The Swift Dzire, on the other hand has a bit of contrived styling. Its looks are debatable, most comments bordering on the negative. Yet, the Dzire changed the way consumers looked at entry C-segment offerings. Maruti Suzuki worked hard on delivering a complete package, which it has. From the classier interiors, to the overall kit, the Dzire represents great value. The two engines, the 1.3 Multijet and 1.3 petrol have enough get up and go, thanks to the lower kerb weight of the Dzire. It means it delivers better fuel efficiency numbers than the Dzire. Rear seat space isn't as generous, but Maruti have made changes to the seat over the Dzire hatchback to offer comfortable seating. Ride quality is good, but the Manza trumps it. However, in the handling department, it is the Dzire that feels more sporty and responsive, with the Manza losing out due to its wooly steering and soft suspension setup

In the end, while the Indigo Manza is better equipped, with better space and at a more competitive price, the Dzire offers a much better drive and the chance of better resale value. Yet, when viewed in entirety, it is the Manza that wins the day for Tata Motors, but the Dzire has been a creditable runner up too.