We recently reported about the Kite Sedan test mule spied near the company’s Pimpri plant, and its now the Kite hatch that was caught by shutterbugs. Yes, the Tata Kite hatchback, a replacement for Indica is been spied during test runs in Pune which hints towards an early launch. The Kite hatch will replace the Indica while the Kite sedan will replace Tata Indigo eCS. The homegrown manufacturer is looking aggressive to introduce new vehicles and next in pipeline is the Bolt hatchback which was showcased earlier at the 2014 Delhi Auto Expo. 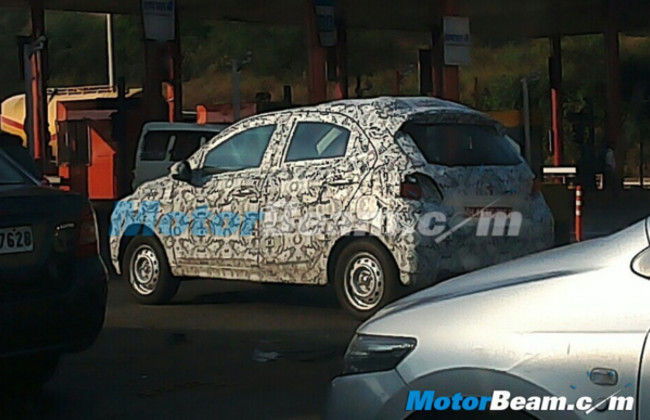 Tata Kite hatch is based on the modified platform of Indica, so expect better driving and handling capability. Redesigned chassis also helps in bringing the NVH levels down along with the reduction of body weight. Earlier spied shots also suggested a premium interior with sporty and smaller steering wheel and music system with USB and AUX connectivity.

Mechanically, Tata Kite hatch will carry the recently introduced 1.2-litre turbocharged Revotron petrol engine doing duty in Zest while for the diesel model, expect the 1.4 liter CR4 turbocharged intercooled engine which gives fuel economy of 25kmpl and churns a power of 70PS @ 4000 rpm with torque of 140Nm. It is also speculated that the company might also use the 3 cylinder, 1.05-litre turbo diesel engine which was featured in Tata Manza Hybrid. In terms of transmission, Tata will bring both the manual and automatic gearbox for Kite.

Since, the automaker will first launch the Bolt hatch, it is expected that the Kite hatch will make its way by mid 2015.