The independent directors of 10 leading listed Tata group companies have received a hefty hike in their remuneration for FY18 as compared to the previous year. Barring Tata Motors, the average hike of 35 independent directors of Tata Power, Tata Steel, Tata Consultancy Services (TCS), Tata Communications, Tata Chemicals, Titan, Trent, Indian Hotels and Tata Global Services in FY18 was 19 per cent more than in FY17, statistics collated by this newspaper show.

The hikes in remuneration were in line with the companies’ performance, barring TCS which had flat growth in profit. Former SBI chairman O P Bhatt received a hike in remuneration from both TCS and Tata Steel of 15.9 per cent and 39 per cent, respectively. In May 2017, Bhatt was inducted into the board of Tata Motors and received remuneration from the loss-making company, too. Another long-time independent director of Tata Steel, Mallika Srinivasan, received a hike of 27.6 per cent in FY18. The hike was possible as Tata Steel turned around in FY18 and made a profit of Rs 134 billion, as its sales grew by 17.7 per cent. Srinivasan also got a 32 per cent hike from Tata Global. Ron Sommer and Aman Mehta, independent directors of TCS, received 9.5 per cent and 12.5 per cent hikes, respectively. Clayton Christensen, an independent director in TCS, received a 10.1 per cent hike. TCS saw a marginal decline in profit in FY18 but performed well on the bourses with its market capitalisation crossing $100 billion in April. 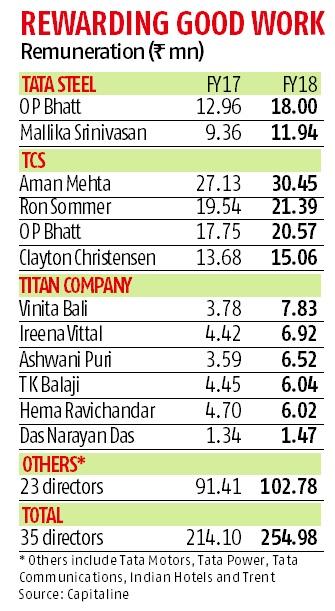 The directors of Titan Company saw the best hikes in remuneration. Vinita Bali, Ireena Vittal and Ashwani Puri received 107 per cent, 56.4 per cent and 81.4 per cent, respectively.

The independent directors of Tata Motors, Nasser Munjee, V K Jairath and Falguni Nayar, however, saw a decline in their remuneration, as the company made a loss on stand-alone basis. The company skipped commission on profits to its independent directors as it made an exceptional provision for impairment of Rs 9.63 billion in FY18. Tata Motors expects significant disruptions in the automobile industry, which necessitated a review of the company’s tangible and intangible assets to ensure “Fit for Future” strategy and, hence, the impairment.