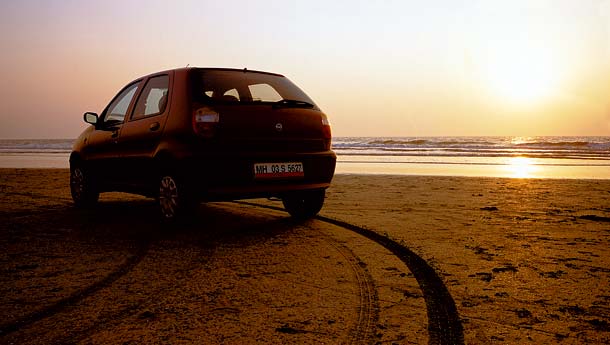 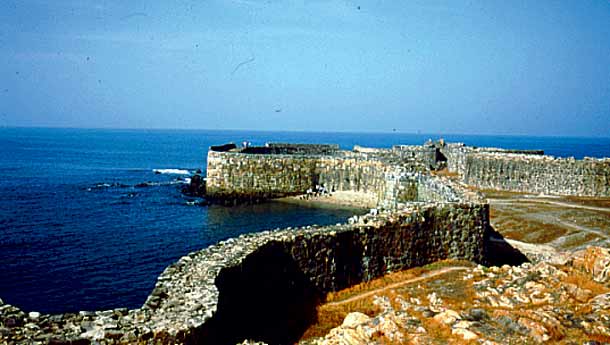 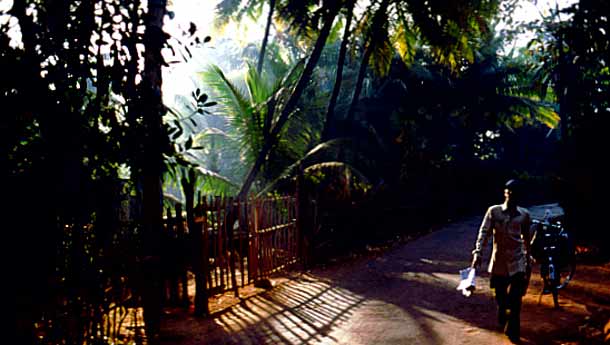 Let’s play word association, shall we? Here goes: photocopy? Xerox, but of course. Small car? Maruti 800, what else? Beaches? Come on, give us a tough one for a change…Goa, naturally. It’s a good bet that a large number of you answered these questions in the above manner. There are certain things that we come to take for granted, and the beach/Goa equation is one such. For years, and this is true of me as well, thousands of people have had only one destination in mind when seized by the urge to discover their inner beach bum. And why not? White sand beaches, sunshine, seafood, friendly people…Goa has it all in surplus quantities. In fact, I was all geared up to head down there for some intensive R&R when I was struck by a thought. Maharashtra and Goa share the same coastline, so what about the beaches in my adopted state? Surely the sand had to be as white and the seafood as fresh? Most importantly, the likelihood of there being precious few tourists to share the beach with was pretty high. There was only one way to find out so, beach towel in hand and Palio freshly washed, I set off down the spectacular NH17 for Tarkarli, a little coastal village.

Driving into Tarkarli, you would be forgiven for thinking you’ve missed your mark and have subconsciously carried on to Goa. Narrow streets, swaying palm trees and the ever-present smell of the surf greet you as you enter. Indeed, there’s not a lot to distinguish the two places apart from the Konkan-style houses, Marathi signboards and, most glaringly, lots of banners extolling the virtues of one Balasaheb Thakeray and the Shiv Sena, in that order. The whole district is a Sena stronghold, so if you’re not a fan, this is definitely not the place to indulge in healthy political debate. Disregard these eyesores, though, and it’s a wonderful little village.

Browse through a Maharashtra Tourism brochure and you’ll see that they’re terribly big on Tarkarli. Greece for a suntan? Pah! Come to Tarkarli instead, they say. For once, the brochures don’t lie. The beach here is arguably the best one on the western coast, inasmuch as comparisons between beaches can be made. I mean, at the end of the day, most beaches look alike, unless you’re talking about the Bahamas or Mauritius. Still, there’s no doubt that this one is brilliant. Dazzling, talcum-like white sand and clean, clear water mean that acting like a proper beach bum is easy as pie. Without preamble, I drove the car right onto the beach, stripped down to swimming trunks and dived into the chilled-just-right water. When I say clear water, I really do mean clear. I swam out to where the water must have been at least 20 feet deep, and I could see right down to the seabed. After an invigorating swim, I strolled over to a shady, palm-lined section of the beach, lay down and watched the world (that is to say, two fishermen) go by. A pup appeared from behind the trees and, labouring under the impression that my big toe was lunch, began nibbling on it. I disabused him of this notion and, before I knew it, was fast asleep.


Have you ever been struck on the cheek by a tennis ball travelling at a rate of knots? If you haven’t, don’t go out and try it. I was abruptly woken by one such blow, and it bloody stings! Springing to my feet, I found that a game of beach cricket was on and the offending party was a boy of about twelve, who had slog-swept a massive six onto my face. People came running up and apologised profusely,so all was forgiven and I even joined in the game. It was a family affair, as it turned out. Mum, dad, sons, daughters, aunties, uncles...everyone had piled into a Qualis and turned up for a weekend by the sea. After the game, I asked Dad what it was that had brought them here. He said it was the ideal family holiday spot; clean beaches, cheap accommodation and most importantly, according to him, ‘all those nange, gande gore log are not there, it is a good, Maharashtrian place for decent people like us.’ Morality judgements aside, I could see his point. Then he said, ‘Of course, no trip here is complete without a visit to the Malvani restaurants. If you want the world’s best seafood, you’ll find it here’. I immediately put that down on my to-do list. But first, a little historical exploration was in order...   The next morning, I got on a boat with about 15 other people at the Malvan pier and headed out to the island of Kurte, about a half kilometre away. An otherwise insignificant piece of land, it is perhaps the most important historical place in Maharashtra because Shivaji built the Sindhudurg fort on it. At a time when the English, Dutch, Portuguese and pretty much everyone else were trying to throw the Marathas out of their forts, Shivaji decided that apart from superiority on land, he wanted control of the coastline as well. With this in mind, he went off and built the Sindhudurg fort, a mightily impressive structure that was intended to become the naval headquarters of the Marathas. This never happened, though. Word has it that after it was completed, the local priest refused to consecrate the structure because he thought Shivaji’s caste was inferior. Never one to let minor details get in the way, Shivaji had the old coot dragged to the site in chains and forced him to carry out the necessary ceremonies. It is probably safe to say that the priest didn’t exactly shower the place with blessings.

Nevertheless, the fort still stands and the ramparts have withstood the ravages of time. Considering the fact that about 15,000 tons of iron were used in the casting and the foundations were laid in lead, this isn’t surprising. As you enter, you come across the foot and hand imprints of the man himself, set in a slab of lime on one of the turrets; a sort of medieval Hollywood Walk of Fame, if you like. The interiors of the fort are pretty much in ruins, although a small number of people still live there in newer settlements. It must be a rather lonely life, especially since they’re almost completely marooned during the monsoons. At other times, they make a living off tourists and cultivation. The fort also has the only temple (the Shivchhatrapati temple) in which an idol of Shivaji is worshipped. Interestingly, the idol doesn’t look in the least bit like the man himself, or the pictures of him in the history books at any rate. Perhaps the history books have it all wrong and he actually looked like the idol, who knows? In this day and age, when textbooks are altered to reflect the ideology of the moro...uh...people in power, anything is possible. To give you an example, the next time you’re at the Taj Mahal, have a dekko at the plaque put up by the ASI just outside the monument, in the courtyard. It gives you, in Hindi and English, a history of the Taj and includes an account of how it was looted by various forces. Here’s the interesting bit: several parts in the English version have been painted over, in a crude effort to conceal the words underneath. In the Hindi version, the paint has faded, and upon closer inspection you’ll find that the censored sections refer to the Jats and Marathas having plundered the Taj. It must be rather inconvenient to keep on bleating about Babar having destroyed a temple, when some of your own ancestors were proving fairly handy at desecration themselves. It’s so utterly juvenile that you don’t know whether to laugh or cry. What’s done is done, for heaven’s sake! Dig your head out of the sand and get on with life. And these are the people who control the future of the country. Enjoy it till it lasts, folks. Forgive the Doomsday predictions, but some things need to be said.

On to a far more interesting, not to mention tasty, subject. Having had my fill of Sindhudurg, I went in search of a restaurant where I could fill my stomach. My mouth was already watering as I approached Hotel Ruchira, my mind filled with gastronomic visions of fish and prawn. I took a seat and a cheerful waiter hove to.   The following is a pretty literal translation:
Waiter: ‘What will you have, sir?’
Me: ‘What’s the speciality of the house?’
Waiter: ‘Fish, prawn, shellfish, chicken, everything is good.’
Me: ‘Of that I have no doubt. Bring me the lot.’
Waiter: ‘Eh? Everything?’
Me: ‘You betcher.’
Waiter: ‘Ok, but it might be too much for one person.’
Me: ‘Fret not about such matters, my good man.’
And I ate. I absolutely guffed. I tucked in like I hadn’t seen food before. A whole grilled pomfret disappeared in a trice. Mounds of crisp, fat masala prawns were hoovered down. Slices of surmai, fried to perfection, stood no chance. A spicy fish curry, tinged with just the right amount of sour, made for the perfect companion to a mound of rice. Some delectable chicken curry inflamed my tongue and delighted my senses. When the going got a bit hot, some cool kokum sharbat calmed proceedings down and prepared me for the next round. All the while, the waiters watched goggle-eyed as I ploughed through the food, no doubt toying with the idea of calling an ambulance. By the time I finished, my ears ringing and my palate aflame, I was as happy a camper as I’ve ever been. God invented marine animals just so they could be cooked up by the good folk in Malvan. It’s in all the holy books, look it up for yourself. Even if you don’t believe me, drive down here and sample a piece of culinary heaven. It’s a near-religious experience.

Why do people go to the seaside? To swim, laze in the sun, sleep, eat huge quantities of food, drink beer and generally be disgracefully lazy. All of these are what you should be doing in Tarkarli, and as much of it as possible. The only exertions you should be making are those when you head off to Malvan, 7 km away, to stuff your face and visit the Sindhudurg fort (in that order). On the off-chance that you feel inexplicably energetic, there are a few options. Head down to the beaches of Kolamb and Achra, a few kilometers down the road. They’re absolutely deserted and ideal for day-long lazing. Carry your own food and drink, since there aren’t any eateries here. About an hour and a half away (you’re a hop, skip and jump from Goa here), Vengurla also offers great beaches, especially Sagareshwar and Mochemad. There’s a lighthouse here too, and the views from way up there are staggering. Bamboo Inn restaurant, near Sagareshwar beach, serves up some terrific seafood. If you happen to come here in May or June, head to the market where you’ll get delectable Alphonsos at the best prices. You could head another 25 km down to Sawantwadi and check out the old palace, shortly to be converted into a heritage hotel, and where a Rani of the Bhonsale dynasty still lives. The town is famous for wooden toys and lacquered furniture, so you could do a spot of shopping as well.