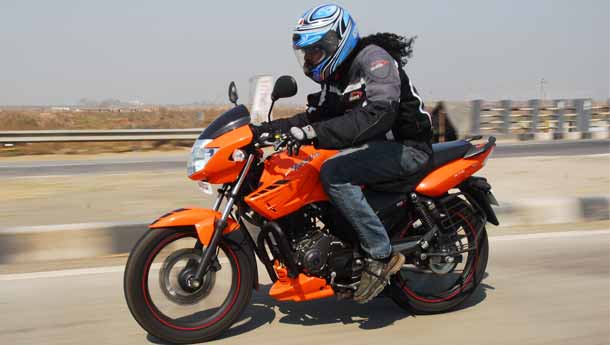 First things first. Look at the orange colour on this bike. We love it! Like Kyle’s beloved tangerines (those big oranges he munches on during lunch time), it makes us want to sink our teeth in it every time we look at it. It looks the same as before, of course, tank extensions being the only new addition since our long term RTR. However, combined with the petal discs, all black engine, suspension and wheels and that Racing GT stripe – as TVS call it – the orange bike looks drop dead gorgeous. And it sounds much better too! It’s louder than the carburetted RTR and makes for the perfect background music for this revhound of a bike. How TVS managed to get this bike past noise emission norms is a mystery, but we’re definitely not complaining. The great colour and the great sound were almost enough for me to forget the reason for their existence – fuel injection.

It might have taken its time coming to us, but it’s still ripe and fresh. The eager motor now gets its juice from injector nozzles rather than jets. The engine sees no changes, and just by using fuel injection, power goes up from 15.2 bhp to 15.7 bhp and torque goes up a smidgen from 1.31 kgm to 1.33 kgm, all thanks to fuel being burnt more completely. No gigantic leap, but it’s the way the power is made that’s more refreshing – more linear than before and the engine is smoother too; the gruffness of the carburetted bike is not there anymore. All that remains is a smooth and revvy engine, the meaty exhaust sound and an easy to twist throttle. No wonder then that the tacho needle seemed to have a delightful affinity for the redline! Throttle response is even better on this bike than the non-FI one. The difference? Um, sort of like orange juice with ice and without ice. Fuel injection makes even the tiniest throttle movement apparent at the rear wheel, which is perfect when you are modulating the throttle perhaps in a corner or even in traffic.

The motor just keeps revving and you keep pace with it by toeing the smooth-shifting five-speed gearbox. Since this is more of a performance bike than the original RTR, a six-speed would have been better, but we reckon TVS are saving it for their next performance bike. We also hope they have an additional 10 bhp up their sleeves. Oh, and better tyres too. The current rubber hoops are the weakest link in the RTR chain and every time the tyres let you down, you can’t help but feel bad for the RTR. And this is heart-stoppingly apparent under hard braking, when the powerful front disc completely overwhelms the front tyre, while any sort of hard braking with the rear disc will make the RTR lose its line – even when going dead straight. A light and compact bike like this needs to have good, sticky rubber to offset its inherent twitchiness.   The RTR deserves better tyres as they are the only thing that will allow riders to exploit the razor-sharp handling to the fullest. Other than this grouse, there’s nothing that we don’t like about this bike. It’s the same high-quality, built-to-last product that we have torture-tested over the past few months, albeit with some other cool features such as a lap timer and a blue backlit digital display to differentiate it from the regular RTR. At Rs 69,370, it is dearer than the normal RTR by around Rs 9,000. Seems steep, especially when you consider the fact that there is no substantial power gain as there ideally should have been. But for an enthusiast who wants the latest technology but doesn’t want to spend big money on the P220 or an R15, this is a very tempting proposition. I, for one, don’t have to make the choice because we’ve got a long termer. Hanging on to the keys is going to be a tough job this time, but I can always tempt Kyle away with tangerines. Heh heh.