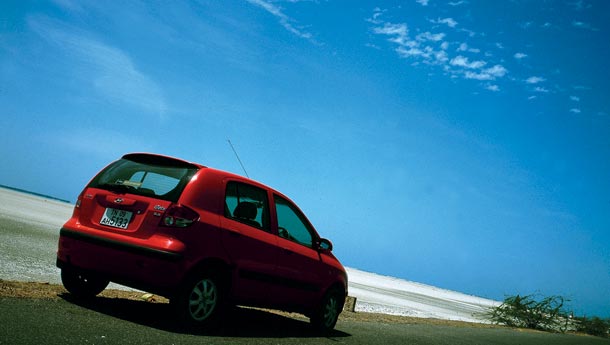 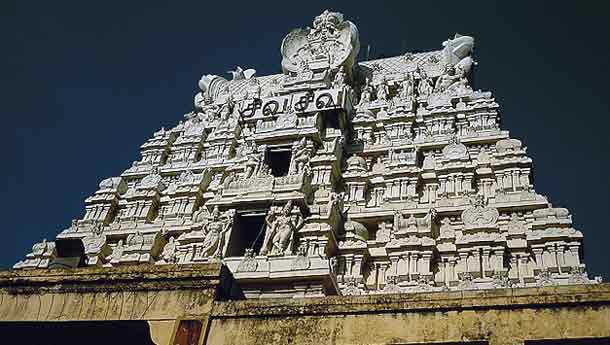 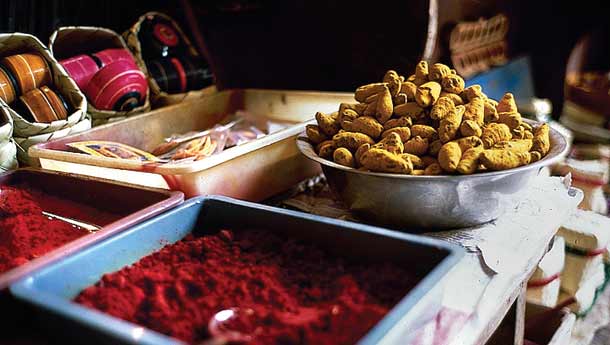 The first thing that struck me about Dhanushkodi (apart from the fact that it didn’t exist any more) was the sky. I don’t know if I just got lucky on that day, but I couldn’t remember having seen a more piercing shade of blue in a while. It added to the total sense of isolation I was feeling at that point – just me standing in the middle of a huge plain, the sea to my right and left and a fish-eye lens of a sky enveloping everything in sight. It felt quite good to be so totally alone,truth to tell; it isn’t often that I get the chance to revel in so much nothingness, and random thoughts and various little molecules started pinging off the insides of my head. One obvious thought that struck me at that moment was that my feet hurt.


Having driven as far as the road to Dhanushkodi would take me, I had parked my car on the narrow tarmac next to the sea and walked over to where the sand began. A ramshackle police outpost (surely among the most remote in the country) stood next to the shacks that various fisherfolk called home, and a sleepy looking constable took down my name and car number. I wasn’t sure why. I mean, I was scarcely going to leap in the Getz and make a dash over the sea to Sri Lanka. Anyway, I didn’t articulate my views to him, since he had a rather large lathi  at arm’s reach, and simply did as I was told. Further down the road, several men stood eyeing me hopefully and almost leapt on me as I approached. They all owned four-wheel drive vehicles and were in the business of ferrying tourists over the sand to the tip of Dhanushkodi and back and, judging by their desperation, business hadn’t been very good thus far. I was quoted prices ranging from a hundred to three hundred rupees for a round trip, all of which seemed somewhat high considering it was an eight-kilometre loop. I decided, partly out of stubbornness and partly because I only had seventy rupees on me, to walk.

That explained why my feet hurt. Rubber chappals aren’t the best form of footwear when you have to walk eight kilometres through sand, so at that point I took them off and stuffed them in my knapsack. Things went swimmingly there on in. The cliché about feeling the sand between your toes was, like most clichés, quite true and I headed toward the tip of the peninsula with a renewed spring in my step. In the middle of this vast expanse of sand and sea, I found it difficult to believe that there had been a lively town of almost 5,000 people here. It was here that President Kalam had been born, and it was to Dhanushkodi that people came by train in order to hop on a ferry and cross over to Talaimannar in Sri Lanka, about 35 km over the sea.   All that changed in an instant in 1964, when a whopping great cyclone laid waste to the town, killing most of its residents, destroying the railway bridge connecting the town to the mainland, washing away a train on that bridge and completely altering the area’s geography. The only thing that survived was the small Kothandaraswamy temple, which I had left behind me nearly 15 kilometres ago. Now, there was just sand – and the concrete carcasses of buildings that seemed to have been obliterated as if in a nuclear explosion. There was a perverse beauty in all of this that was slightly unsettling, but I ignored it as best as I could. Instead, I tried to digest the fact that this was it – the final stop, the end, finis. The last piece of Indian territory on this side of the country, and I was standing on it.

In front of me was Adam’s Bridge, a chain of coral reefs that extended almost all the way to Sri Lanka, supposedly the stepping stones that Hanuman used to follow Ravana during Sita’s rescue attempt. It is this shallow reef that forces ships sailing from India’s eastern and western coasts to go all the way around Sri Lanka to reach the other side, and it is this reef that the Indian government plans to bypass with the Sethusamudram Canal project. What they plan to do is dredge a 12.8 metre deep and 300 metre wide two-way channel through the shallow channel in the Gulf of Mannar, thereby reducing sailing time between our coasts by almost 36 hours and giving Tuticorin the chance to develop into a major port. Naturally, nobody seems to overly concerned about the environmental consequences, some of which could include increased coastal erosion, the destruction of the fragile marine eco-system in the area and the groundwater over in Jaffna becoming saline. The government says ‘Don’t worry, we’ve done extensive studies – nothing will be destroyed, fishermen’s livelihoods won’t be affected and everything will be just dandy’. When the government smirks and tells you something like that, you can pretty much consider the whole thing a write-off and run for cover. I didn’t know when (or if) I’d be back in Dhanushkodi again, and if I ever did make it back there was every likelihood that the whole place might be awash with construction activity, so I decided to just sit there for a few hours and enjoy it while it lasted.

All this peace and quiet was so far removed from the chaos of Madurai (where I had been only a few hours previously) that it was deafening, as it were. I had driven into Tamil Nadu’s oldest city from Thanjavur and had immediately gotten hopelessly lost. I wanted to go and see the famous Meenakshi temple, but getting there turned out to be easier said than done. The city’s roads seemed to be the cartographic equivalent of Churchill’s riddle wrapped in a mystery inside an enigma. I stopped and asked an auto driver for directions. He said ‘Take the next right and the immediate left. Then it’s left again and a right at the traffic signal. After the signal, take a U-turn and the second left. At the mechanic’s shop, take another left, left again and then a right and voila, you’re right back where you started!’. Ok, I made up the last bit, but he may as well have said it. My head reeling, I asked him to simply engage his meter and lead the way to the temple.   Megasthenes, the Greek ambassador to India during the 3rd century BC, had paid rich tribute to the city of Madurai,but I doubt he’d have been terribly chuffed with the modern version. Nor, for that matter, would the sangam, the legendary academy of Tamil poets who used to meet around the Meenakshi temple’s tank and who produced literary classics like Silappathikaram. The auto driver shepherded me through a maze of noise and disorder until, quite out of the blue, one of the temple’s towering gopurams hove into view.

Someone had told me that in Madurai, almost everything revolves around the Meenakshi temple. Indeed, the story goes that King Kulasekara Pandya discovered a lingam in the middle of a forest and built the temple around it. Overnight, a lotus-shaped city came up around it, soon to be named Madurai after the drops of nectar (mathuram) that fell from Shiva’s matted locks. Once inside, I could see why it was considered so important. This wasn’t merely a temple; it was a city within a city, with a life and a pace of its own. Its twelve towers were spread over a huge complex that positively reeked of ancient history. I half expected to see the sangam still seated around the main tank, heatedly discussing the merits of iambic pentameter or whatever else they did in those days. I went over to the famous Thousand-Pillared Hall (where there are actually only 985 pillars, but who’s counting?) and was amazed by the sheer mathematical precision and symmetry of their arrangement. I’m always amazed by how the artisans of that era managed to pull off feats like this – I mean, can you even begin to think of anybody replicating their efforts today?

I later joined the crowd waiting for a darshan, not so much to pray for forgiveness or anything, but to have a look at the unique idol. Usually, most Nataraja idols have Shiva standing on his right leg, with the left raised to his shoulder, but in this case it was the other way around. Frankly, I wouldn’t have known the difference if I hadn’t read about it earlier, but it was still very impressive. After I had had a good look around, I headed back toward the hustle of Madurai. I managed, after several wrong turns, to find my car in the parking lot, but immediately realised that the battle was still ahead – I had to make my way out of town. I asked a nearby shopkeeper the way to the highway. ‘Ah, no problem’ he said. ‘Take the next right, then the third left after that, and then...’

TRAVEL LOG
You have to get to Rameswaram first in order to go to Dhanushkodi, and it’s a very nice drive too. As you head toward Rameswaram, you can see the peninsula stretching out in an inverted V ahead of you. Soon, the sea is on both sides of the road – a wonderful feeling anytime, anywhere. After you cross Mandapam, you get to the Pamban bridge, which is another amazing sight. It connects Rameswaram, which is actually an island, to the rest of the country and is quite an engineering feat. You absolutely must stop in the middle and peer over the side – the railway line running alongside the bridge and over the sea is another eye-opener. Rameswaram itself is a tiny place, but is considered to be the Varanasi of the south. Its principal claim to fame is the Ramanathaswamy temple, whose four corridors are just incredible, spanning a total of 1.2 km. They’re lined with ornate pillars throughout. The temple has a total of 22 tanks, with each tank said to have different powers. Other than the temple, there’s not much to see or do other than to enjoy the fresh sea air. Dhanushkodi is about 22 km away from Rameswaram and a trip there is highly recommended. It’s best to get there really early, so you can catch the sunrise. Carry snacks and water, as there’s nothing by way of shops there (although the fisherfolk will fry you up some fish).