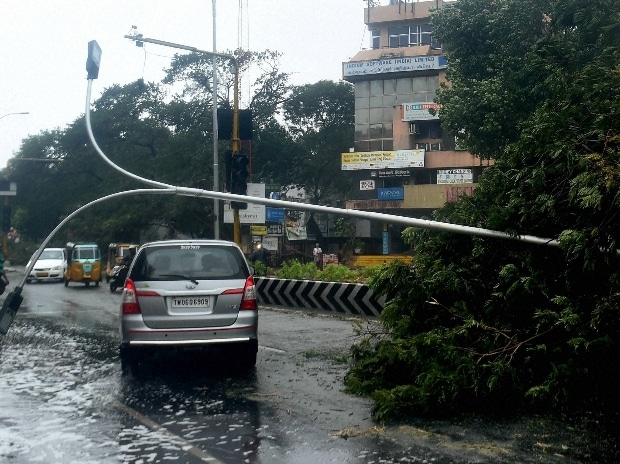 A car moves past an uprooted lamp post and tree following a storm in Chennai (Photo: PTI)

The severe Cyclone Vardah, which hit the coast of Chennai on Monday has caused destruction worth up to $1 billion to the industries, said industry body Assocham.


Though total cost of damage resulting from output lost as a result of disruption to economic activity and the cost of rebuilding homes and infrastructure, remains unclear, arriving at a clearer assessment could be reached within a couple of months’ time, he further added.


Vardah has lashed out Chennai on Monday as it made a landfall in the afternoon. The city has experienced heavy wind at the speed of around maximum 120 kms per hour during the day creating heavy damages and power cuts across the city and nearby coastal districts, making everything to come to a standstill.


Cyclone has hit Chennai after 24 years and the government has issued an alert on Sunday along with advise to all the Government and private schools and colleges to close. The authorities even advised private companies to allow the employees to work from home.


In the industrial areas like Oragadam, near Chennai, where major multinational OEMs have located, decided to shut the factories on Modnay as the cyclone intensified


In other words, the city has a capacity to produce three cars every minute and one commercial vehicle every 75 seconds.


Besides, there are scores of auto component makers supplying to these OEMs.


An estimated Rs 1,000 crore was lost on Monday on account of the unscheduled closure of business due to the cyclone.


Information technology and related services companies, which collectively employ around 400,000 people in Tamil Nadu in more than 600 companies, remained shut on Monday as most of them are located just few kms away from the sea. The Old Mahabalipuram Road (OMR), which is the hub for IT companies is located just 10 kms from the sea.


Companies asked employees to work from home, but as TNEB decided to shut power across the city and the neighboring areas due to heavy winds, the employees could not use the option.


Few of them ended up going to office, while a major chunk remained indoors.


Retail shops and hotels have decided to put down shutters. At Chennai's popular retail hub T Nagar, which is one of the largest in the country, shops were closed since Monday morning.


This hub does a business of around Rs 100-200 crore a day according to estimates.


On Tuesday, while things were on its way back to normal, the power cut which continued for second day on Tuesday has impacted many industries, especially SMEs.


Assocham has recommended the industry both in the public and private sectors to set up rapid response units under the aegis of their respective CSR (corporate social responsibility) divisions to collect donations to provide vital supplies (food, clothing, beds, blankets and other essential relief items like tarpaulins, water purification equipment and medicines) for people who have been evacuated and shifted to relief shelters.


“Local fishery trade, poor supply of power and supplies due to logistics crunch in both urban and rural areas, extensive damage to crops due to incessant rains, loss of livestock, damage to private poperty, problems in ferrying passengers and transporting goods owing to cancellation of flights, trains, road blockades may significantly hit the region’s economy,” said Rawat.


The cyclone might also have a short-term impact on the tourism industry of southern India, a leading economic activity, especially in Tamil Nadu which accounts for a good 10% share in total investments attracted by hospitality sector across India, he added.


Assocham has also appealed to the insurance industry to constitute special teams to expedite settlement of claims of people hit by the cyclone.