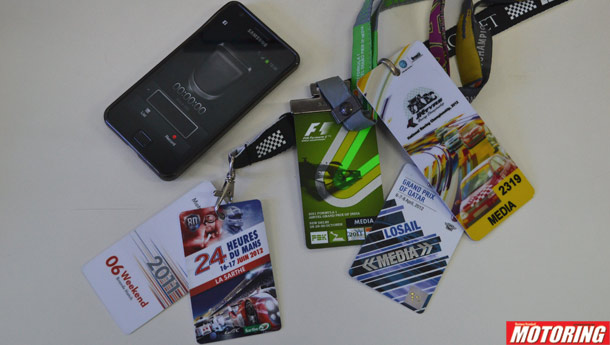 I've always found that doing a full fledged 'interview' with someone from the motorsport fraternity for the first time makes me rather nervous. Somehow, once an interview has been pre-arranged, there comes with it this burdensome presence. It's like a metaphorical Damocles' sword hanging over you. It might strike you down just as you ask a question, it might swing down and chop the head right off the person you're interviewing, which means they'll either give you really boring answers, or they won't answer at all, or it might do the absolute worst - it might get your voice recorder. Suddenly in the middle of the interview, you'll realise that the blasted thing stopped recording ages ago, and you'll have to furiously start scribbling responses down as you go along. The odds of your remembering the answers to questions you'd already asked are also slim, because you were in fact thinking of the next question, while the person being interviewed was answering them.

And, on that rare and absolutely dreaded occasion, there will be a triple whammy - all three things might just occur at the same time. So it was one day that I found myself driving around in circles, trying to find the place where an interview, that I'd been informed of that very day, was to happen. Two Formula 1 drivers' brains to pick before the season started, what an opportunity, eh?! Some Google maps aid, (I'd just discovered my phone was capable of such sorcery) and some directions from good samaritans later, I found myself at the location of the interview. Ah, so many questions to ask. And then I caught sight of the two drivers - let's call them Saul and Rico. Saul looked like he'd just  had four teeth pulled out and was suitably sullen and mute. Rico looked a touch tired, but forced a smile and sat himself down to answer our questions. And then it happened - Damocles' sword part one - the voice recorder refused to activate at all. Out came the notepad and pen and along with it a question for Saul. Painful silence - Damocles' sword part two - he simply refused to say anything. And then Rico chips in and starts talking, answering the question on the team's behalf. Instead of listening to Rico at that point I'm a little flustered, wondering whether I'd said or done anything to offend Saul - no, I hadn't the question was fairly standard. And then the sword struck for the third time - Rico had finished answering the question and was looking at me with a rather amused expression on his face waiting for my next question. The sword had got my tongue, all right.

There are, however, Damocles' sword free zones. Zones where the sword hasn't yet managed a pass or accreditation that prevents it from following you around and hanging over your head, and this, quite simply, is the racetrack. A racer's natural environment is the best place to talk to him, provided you don't barge in with questions just as he's about to get in the car and head out on track, and certainly not when he's whispering to his race engineer in conspiratorial tones. There's a hustle and bustle about the track that just allows for questions to flow and answers to arrive in the manner of any normal conversation. That heavy tag of an interview can be cast aside. And somehow answers are recorded without any manner of recording devices being involved. Whether it's a multiple Le Mans winner or an eleven year old go-kart racer, the odds of getting good responses at the track are higher than at any other place.

Coming soon - The revenge of Saul and the sword.