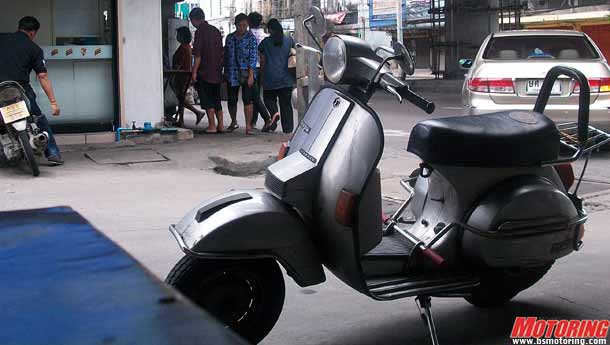 I'm not one for stereotypes, but I broke my 'foreign trip' impasse by visiting the county millions of Indians break theirs with – Thailand. In all honesty, I may as well say I visited the country called Bangkok, because that's what my trip was largely restricted to. Restricted is only a relative term, you must note, for the only restriction I had was from scaling towers with my bare hands and running off with a CB1000 Bold'Or parked outside a shop.

A liberty of three days is what I had although the wallet seemed to have packed only for slightly over a day. Having landed at 7am with just about four hours of sleep to boot, promises were made to journos from other publications (this was a media invite we were on) to catch up for lunch. That was obviously not to be because sleep had suddenly decided to do a vanishing act and the view from the hotel prodded me to get off my posterior and walk. So walk I did – for the next seven hours – through the length and breadth of the city.

For someone who has been to all of three states and one union territory in India, Bangkok was like visiting another planet. Nothing was like back home, nobody spoke English, or at least the English we understand, roads were clean, traffic was disciplined and importantly, nobody honked.

But the skies were calm, the hands on my watch were rather relaxed, and there was nothing to lose. I walked aimlessly, making mental notes of landmarks ('odd, orange apartment complex'; 'strange blow-up doll outside a car service workshop') just so I could find my way back to the hotel. Communication was a bit of a challenge for the first few hours but some meticulous sign language and vague finger pointing did the job most of the times.

After five hours of walking, I settled down at a streetside joint, pointed at a few bowls of what I was promised was fish, ordered a cold one and watched the locals go by their business. This was largely the pattern of the days to come as well. Lots of walking, mixing with the locals, some more walking, street food (cheap, but delicious!), soothing beverages, ogling at motorcycles and cars, wondering why everyone and their uncle drove pick-up trucks, walking even more and eating in sync with my biological odometer.

I will write about the city itself in the time to come. But first, i'll try to document the feeling of being on alien soil. To be honest, I felt nearly the same way even on my rather short stay in Jaipur, but at least there were the familiar sounds of abuses and the like making it a lot less, well, alien. In Thailand, however, things were different. The people looked different. Cars looked better. Motorcycles were fascinating.

I was armed with the freedom of doing anything I liked (well, almost), and there was so much to look at, I ran out of eyes. I walked for hours in every direction from our hotel, made friends with people I will probably never see again (Facebook is the only bit of relief). I conversed with the locals using hands, bought things off their shops and was even invited to lunch in the cottage of a working couple – an offer I willingly accepted. All of it, without there being any linguistic similarities between us. There was no expectation and hence, no disappointment. What I could communicate, I did. What I couldn't, I let go. What a beautiful, beautiful world.