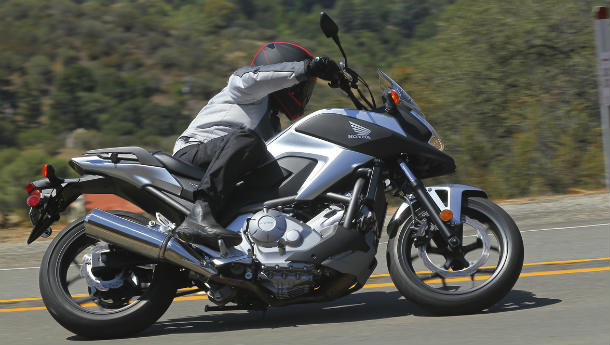 Everyone loves a fast big-bore motorcycle. Like the old cliche goes, its the closest you’ll ever get to flying without getting into a combat aircraft. But the thing is that speed is expensive; engines that can handle 14,000 RPM on a day-to-day basis cost money, aerodynamics as well and each and every part has to be lightened and strengthened at the same time for that one ultimate goal - speed.

Now,ever since financial types took the world’s money and set it on fire, the world’s economy has been on life-support. Few can afford speed these days, at least face-warping, mind-numbing superbike speeds. As a result, the bike brands had to rethink their product line-up. More than anything else, the motorcycle that represents this paradigm shift in the market is the Honda NC700X. It’s not jaw-dropping to look at, it doesn’t make a gazillion horsepower nor does it have a racy name like ‘ZX-FirebreathingDragonBlade-R’. In fact, this do-it-all Honda’s parallel-twin is inspired by the four-pot on Honda’s Fit hatch and makes a modest 51 horsepower. Even the rev-limit is set at 6500 RPM. But where this thing shines is rideability and refinement - you’ve got fat chunks of low and mid-range torque, precise fueling and great refinement levels. It can even nail 35 kpl, if you ride sanely.

It’s got a second-generation automatic dual-clutch transmission (DCT) where the Honda will sort out the shifts for you and in case you want more control, it’s got manual button shifters as well.

Also, since it’s tipped 62-degrees forward, it also means that there are benefits in terms of handling and practicality. The commuter-grade diamond-shaped steel job is utilized to its maximum potential, enabling enjoyable, confidence-inspiring handling that the newbie won’t be terrorized with and something the experienced rider can maximize. Throw in a dual-clutch automatic transmission with manual override, a 21-liter storage compartment within the tank, ABS, decent cycle parts and you've got a fun, practical machine that gives you a bit of everything.

It’ll be fun-to-ride, though you won’t soil yourself every time you open the throttle, it’ll be effortless to ride in whatever conditions you throw at it, it looks good, it’ll be as reliable as the atomic clock and it is great value. Commuter, long-distance tourer, corner-carver, light trail bike and anything else you can think of - it’ll do all these roles and then some. Abroad at least, at $7000 or Rs 3.77 lakhs converted, it’s a bike that journos are raving about. If Honda chooses to route it via South East Asia like Bajaj does with the Kawasaki Ninja 650R, it might just be possible to bring the NC700X in at a similar price bracket. How about that, Honda? And while you’re at it, plonk in a few CRF250Ls on to that container as well, will ya?