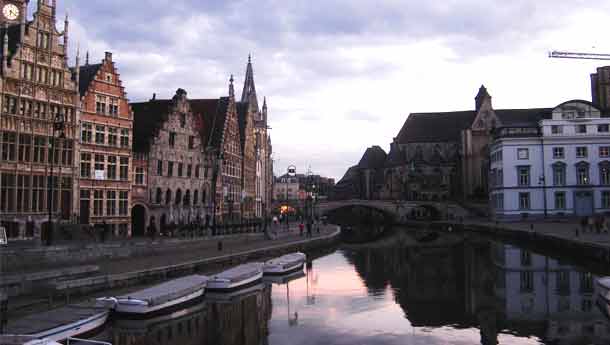 Phew. Five days in Amsterdam come to an end, five of the very best days at that. Time to keep-a-movin’. Next scheduled stop Belgium. I’ll be honest here; Belgium wasn’t top of my list of European countries to visit. I mean, it doesn’t exactly spring to mind when you think Europe, does it? Almost decide to bypass it at the nth hour and nip straight over to Paris instead (now THAT’S a place and a half for you). Joost offers advice to the contrary, though. ‘Don’t go by preconceptions. Belgium’s a great country, go there and you’ll have fun. Great beer they make, too.’ Right, how much is a train ticket to Belgium, then?

Soon on a train out of Amsterdam Centraal. Headed to Ghent, a World Heritage city (also spelt Gent and, in an unfortunate twist, Gand, and pronounced like you’re having a mild choking attack). Was also at one point the second largest city in Europe after Paris, bigger than heavyweights like London and Moscow. You learn something new every day, eh? Nothing is too far away in Europe, so within a couple of hours the train deposits me at Ghent St. Pieters station. Get off with fellow backpackers and go in search of the tram to my hostel. First impression’s neutral – the station’s a graceful old number and immediate surroundings pleasant enough. World Heritage level, however? Not this part of town,  at any rate.But wait, what’s this I see? As the tram trundles towards the town’s centre, I spy a soaring church spire in the distance. Architecture’s changing, too. Contemporary Euro-bland (I made that up) gives way to quaint town houses until, when I get off at my stop, I’m in the middle of a full-blown medieval town, complete with cobblestones, lovely buildings, canals and a stonking great castle – Gravensteen, or ‘castle of the count’, the town’s true centerpiece. Decide to go have a look right away, which isn’t the simplest thing to do when lugging two rather heavy bags.

What the heck, probably need the exercise anyway.Built in the 11th century, over the years it served as digs to various counts of the region, a prison, a courthouse and even a factory making indeterminate goods. Was scheduled for demolition before the town wisely bought and restored it. Gives the impression of being much larger than it actually is, which I suppose is the whole idea. Inside, it’s quite interesting, with a collection of weapons from different eras. Set out to find my hostel, which entails a walk through lanes and alleys of such startling prettiness that it’s almost a crime. Every sloping roof, every ancient door and window, every mischievous ray of sunshine lighting up a colourful wall – all of them combine to produce an atmosphere of ineffable good cheer. Hostel’s tucked away in a quiet corner, which is great. Helps that the girl at the reception is near-Miss World calibre. ‘Here, have a map of the town, it’s got all the information you’re likely to need’, she says and lets loose a smile that, if you’re unprepared, could cause serious damage. Thank goodness I took Joost’s advice.   Dump my stuff, say hello to roommates (more about whom later) and trot off to have a look at the rest of town. A short distance away is the Saint Bavo Cathedral, which you cannot miss unless you’re visually challenged. Impressive in that typically gob-smacking Gothic fashion, but real action is inside. The altarpiece, The Adoration of The Lamb by Jan and Hubert van Eyck, is a masterpiece of Western European art. Peter Paul Rubens also had a go at something he called ‘Saint Bavo enters the cathedral at Ghent’, another superb piece of work. Down the road is St. Nicholas’ church, whose tower served as the town’s bells until the third member of Ghent’s famous church trio, the belfry, was built. Inside, there’s a magnificent church organ built by the Frenchman Aristide Cavaille-Coll, a fellow who clearly knew a thing or two about organs. Hard to believe, from the outside, that the church was on the verge of collapse until a timely restoration job. The belfry, by itself on the World Heritage list, offers a spectacular view out over the town if you have the pluck to climb up. Personally have a thing with heights, but view really is something else.Lunch is a huge pile of artery-blocking, grin-inducing Belgian potato fries. These are the best chips in the world, and don’t let anyone tell you any differently. Condiment of choice in these parts is mayonnaise rather than ketchup, an unusual but delicious combo. For dessert there’s Belgian waffles fresh off the griddle, with a light dusting of powdered sugar. Oh, and let’s not forget Belgian chocolate, again the world’s best. Whether from an exclusive boutique or from a supermarket, it’s all A-grade stuff.

In the evening, after a wonderful day spent just walking around, head over to the Graslei, a particularly beautiful spot, with great architecture and the St. Michel bridge. Meant to be the most romantic spot in town, and even a semi-cynic like me can see why. Standing on the bridge, setting sun casting dazzling hues on the water and buildings, it’s difficult not to feel a sudden surge of feel-good, the sort you want to bottle up for use later. Just the time for a nice drink, then. Enter a bar where they brew and sell some 150 kinds of  beer.’ Barman recommends a type brewed by Trappist monks, which proceeds to slug me across the jaw in less than ten sips. Either the man has a twisted sense of humour or a stomach of pressed steel. Switch to brews with less intent of homicide, and things are better off. Next door is a bar specialising in homemade gin in various flavours. Drop in purely for academic reasons. Chocolate and vanilla flavours the absolute dog’s wotsits. Manage to make it back to hostel without plunging into one of the numerous canals placed just for the purpose. Later at night, a heavily irrigated Irish chap in the room decides that the five steps from bunk to loo are five too many and urinates lavishly all over the floor. Then he tries to crawl into my bed. I leave him to it and leap to the bunk on top. No wonder there’re so many Irish jokes.Next morning, after making sure Paddy (or Jock or whatever his name is) has his plumbing under wraps, I decide to hop on a train to Brussels. Only 30 minutes away – what a delightfully convenient country. Capital of Belgium, HQ of the European Union, HQ of NATO – guess that makes it the unofficial capital of Europe, eh? First port of call is the Comic Strip Museum, mainly on behalf of Srini because he’s such a die-hard Tintin fan and it’s probably the only Tintin pilgrimage he’s yet to make. Problem is, it looks like a neutron bomb went off in the city – further away from the station, there is not one single person on the streets, and apparently even residents sometimes get lost. Thankfully a friendly old man clocks me looking utterly clueless and gives me detailed directions to the museum, housed in a lovely Art Nouveau building. Herge, of course takes pride of place, but discover that Belgium has an amazing comic strip heritage. Tintin, the Smurfs and Lucky Luke are but a drop in the ocean, as it were.

Don’t have too much time, so head for the Grand Place, Brussels’ most popular tourist spot (yes, sometimes you have to head for the touristy bits). No wonder – it’s an amazing place and never mind the hordes. The architecture alone, a combination of Gothic and exuberant Baroque, is worth it. Hotel de Ville, or City Hall, probably the crowning achievement, simply breathtaking in its splendour. Being Sunday, the cobbled square in front of it is abuzz with activity – some sort of concert being set up, artists sketching tourists, little flower stalls doing brisk business, kids driving parents to distraction. Srini wants a(nother) Tintin watch, so I find a store selling all manner of Tintin stuff and buy a rather nice one for him. Tempted to buy Tintin chocolates, but price makes my eyes water. Head off in search of Manneken Pis, or ‘little man piss’, arguably Belgium’s most famous little man. Considering it’s only a small statue of a little boy peeing into a large basin, it attracts an insane number of tourists. I get lucky – it’s costume change day today (he has several hundred) and there’s the full shebang. Band playing, people cramming the area and, in a stroke of sheer genius, the fellow’s been rigged to squirt out beer! Crowd goes wild as cups are handed around. What a country! Sounds of merriment from the square indicate the concert’s begun. Apparently it’s Brussels Day, so the place is packed to the rafters. A superb choir, conducted by a charismatic young man, belts out presumably patriotic songs. Crowd joins in full-bloodedly, and although I can’t understand a word, it’s hard not to be caught up in the euphoria of the moment. I join in and clap along, revelling in the realisation that it doesn’t matter if you’re from another country or if you can’t speak a language – all you need to do to have a good time is jump in.   Travel log:
Belgium is a truly lovely, friendly, fascinating country – I highly recommend it on any European itinerary. Since it's so small, you can easily base yourself in one city (in my case, Ghent) and make day trips by train to other cities like Brussels, Brugge and Antwerp. Ghent alone is worth at least two full days, what with its killer combination of atmosphere and architecture. The trio of the Saint Bavo Cathedral, Saint Nicholas Church and the belfry is of course obvious, as is Gravensteen. The thing to do in this great town is to just walk around. See an interesting lane? Go down it, because there really is no telling what you'll find – a stunning house, an old restaurant, an even older bar perhaps. Speaking of which, check out the Het Waterhuis bar for excellent beers, and the Dreupelkot 'genever' (Belgian gin) bar next door. Pol, the genial owner, makes a huge variety of superb flavoured gin. Do go over to the St Michel bridge at least once, it really is very picturesque. You should also go to Brugge, a 20-minute train ride away and just as charming as Ghent, only a wee bit more touristy. A good way to get a feel of the town is to get on one of the numerous canal-boat tours. Especially if the weather's good, it's a delightful experience. Remember to stock up on chocolate and, if you're into that kind of thing, lace. Make sure that the lace is actually made locally, though – these days, a lot of it is outsourced to Taiwan!

It's best to stay in Ghent and travel around the rest of Belgium, since it's quiet and cosy. Hotel Erasmus (erasmushotel.be , 79 euro onwards with breakfast) is a great choice at the upper ed of the scale. It's right next to the Graslei and close to all the sights. If you're looking for a cheaper bed, the De Draecke hostel (hostelworld.com , 16 euro onwards with breakfast) is great value for money. Just try and make sure that any Irishmen in your room are sober.