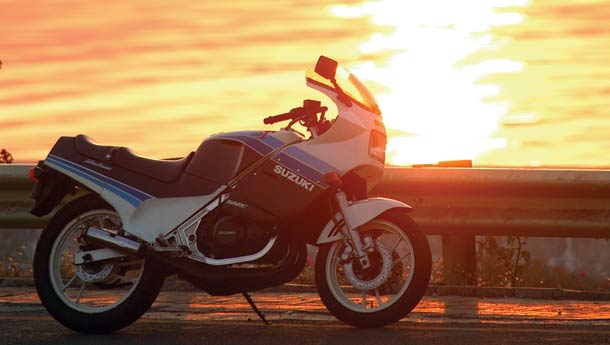 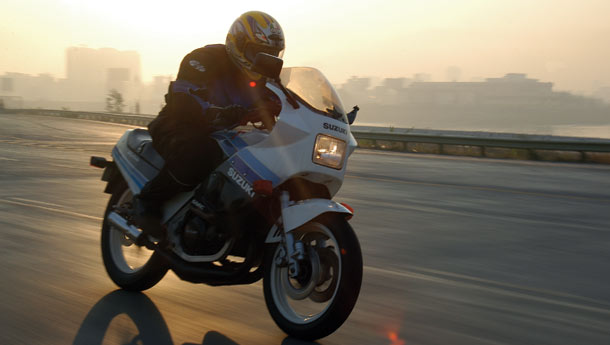 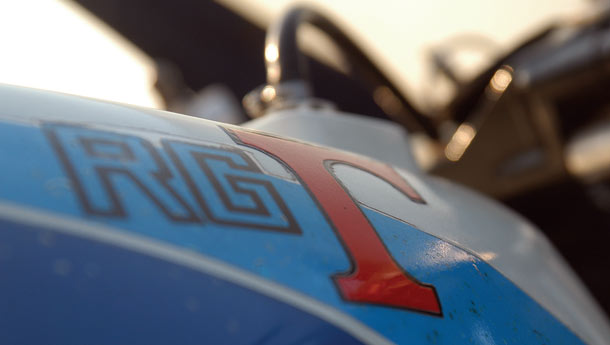 Damn these little four-stroke tiddlers. Once, in ages past (ok, two years ago, if you’re being finicky), I used to call a Yamaha RD350 my personal mode of transport. Wait, that’s doing it a grave disservice. The Yammie was so much more than that – it was an extension of me and my personality, my moods even. It was temperamental, downright sulky and worked if it felt like it – but when it did work, it was women and children first. It took a totally different set of skills to ride a powerful two-stroke machine, and I had just about got them down pat when I joined Motoring.


Then came the endless array of me-too four-stroke commuters. At first, I was completely put off by their total lack of character and power, but riding them day in and day out spoiled me to a great extent. You kicked once or pressed a button and they started right away. They didn’t leak oil or overheat. They were quiet, refined, didn’t belch smoke and required little effort to ride, plus they seemed to generate fuel as they ran. In
daily-commute traffic, they were an absolute boon. Before I knew it, I had given my beloved RD to a friend for safekeeping and had crossed over to the dark side – the 100cc demons had won.

Herein lay the problem. When you’ve been lulled, over two years, into what I like to call the ‘Program’ mode of riding (where the bike pretty much does everything for you), switching to ‘Manual’ mode can be a bit of a problem. I discovered this to my detriment astride the fearsome Suzuki RG250 Gamma, a two-stroke fan’s wet-dream come true and an environmentalist’s nightmare.

The Suzie in question, in classic blue-and-white livery, was a compact 250cc, parallel-twin, 46 bhp, 130 kg race-replica of early nineties vintage and had been painstakingly restored by its current owner. It was good looking in a rectangular sort of way, and its aluminium spar really stood out. However, most people who stood in queue for one of these didn’t really bother that much about looks –  true hooligans, for whom ferocious performance and a haze of getaway-smoke at the lights were the be-all and end-all, were the target audience; you had to be bonkers to useone of these as a commuting tool. I realised this as soon as I settled into the seat; the riding position wasn’t exactly designed for 30 km city runs. Indeed, when Suzuki first unleashed the RG250 Gamma on an unsuspecting world in 1983, they built it as a road-going race bike.   While most of the other Japanese motorcycle companies switched to four-stroke technology in the late ‘60’s and early ‘70’s, Suzuki bucked the trend by continuing to manufacture new and larger two-stroke machines. Their first motorcycle may have been a four-stroke, but the fact was that when Honda unveiled
the seminal CB750, Suzuki didn’t have any four-stroke competition on offer. Instead, they kept building large, fairly economical and practically bulletproof machines like the T500 and the ‘Kettle’, or the GT750. It wasn't until the late ‘70's that Suzuki also started to make four-strokes on a large scale. Their two-stroke lineage lived on, though, both on small, cheap machines and on the racetrack.

Yamaha fired the first salvo in the 250cc class in the early ‘80’s, with their two-stroke RZ250R. Honda hit back with the four-stroke VT250F which, although not as manic, was a great success because of its reliability. Cue 1983, when Suzuki presented the RG250 Gamma and turned the class on its head. Although many motorcycles had been called road-legal racers before the Gamma, the RG was perhaps the first mass-produced motorcycle with a lightweight aluminum frame and a racing-type aerodynamic fairing, and it started a new trend in the process. Suzuki used all their two-stroke knowledge and racetrack experience when building the Gamma and it showed – it was light, fast, handled superbly and was an instant box-office hit in the racing circuits.

I, however, am most definitely not a motorcycle racer. I’m a humble travel-writer and sometime photographer who happens to like bikes a whole bunch and (as mentioned previously), I’ve been spoiled silly by namby-pamby four-strokes. It was therefore with some trepidation that I gingerly kicked the engine into life and prepared to take the Suzie for a spin. She fired up instantly and settled into a slightly uneven growl, like a lion with a bit of a chest-cough. I snicked into first, gently let the clutch go (there’s nothing as embarrassing as wheelie-ing yourself off a bike, specially if said bike belongs to someone else), twisted the rather heavy throttle and coasted off.   Hmm. All this felt vaguely uncomfortable – the engine and clutch rattles, the stiff pedals and levers, the vibrations, the smell of 2T, the ache in the wrists. I felt a ‘Man, why is this bike so unrefined’ sort of complaint begin to take shape in my mind, but I cut it off at the pass – ‘remember, this isn’t the Bajaj Discover you rode in on’, I told myself. Burbling along at 40 kph in second, I twisted the loud handle and prepared for lift-off...and nothing happened. The Suzie yawned and stretched a bit, but didn’t go very much faster. ‘Aagh, do something, anything! I may as well walk!’ Patience, dear boy, patience. I kept the throttle open and, at about 6000 rpm, felt the bike begin to stir. The growl took on a higher pitch, perhaps in warning about the violence shortly to follow. At 7500 rpm, the Suzie coiled itself up and prepared to spring. At 8500 revs, she stood bolt upright and said ‘Right, I’m off’.

What followed next was utter mayhem. In an instant, the growl turned into a shrill wail as every one of the 46 horses reared and whinnied and catapulted the bike forward, leaving me tucked in and hanging on for dear life. My hands and feet were a blur as they tried to keep up with the ever-accelerating rev counter, and I felt like I had just received a syringe full of adrenaline straight to the heart. Keeping the thing in the powerband was now my only aim (next to self-preservation, of course), and for the next minute or so the 10,500 section of the rev counter registered a lot of activity. It was sheer, unadulterated magic. This is what I imagined a GP racer would feel like, and I wanted more.

Then I ran out of road. It happened so fast I almost couldn’t believe it, but I remembered to brake and began downshifting. Nothing. No let up in forward motion and there wasn’t much left of the Bandra-Worli sealink. ‘You moron, two-stroke + too much = no engine braking’, my brain screamed. I gulped and squeezed the lever as hard as I dared. When new, the Gamma’s brakes were meant to have been phenomenal, and I was very relieved to find that they still had a mean bite. With only a slight squeal, they hauled the Suzie in on time, and I came to a halt. My fingers felt numb, my wrists and back ached and there was a strange buzzing noise in my head. The engine was popping and ticking and pinging away and, after I had recovered sufficiently from my cardiac arrest, you would have needed a meter rule to measure the size of my grin. It struck me immediately – after being anaesthetized by piffling four-strokes that were not much more than lawn-mowers on wheels, the Suzie had given me my motorcycling mojo back.This was what a bike was meant to do – terrify, exhilarate, uplift, amaze and dumbfound. I got off and said a quiet thank you to the Gamma. They really don’t make ‘em like this any more.