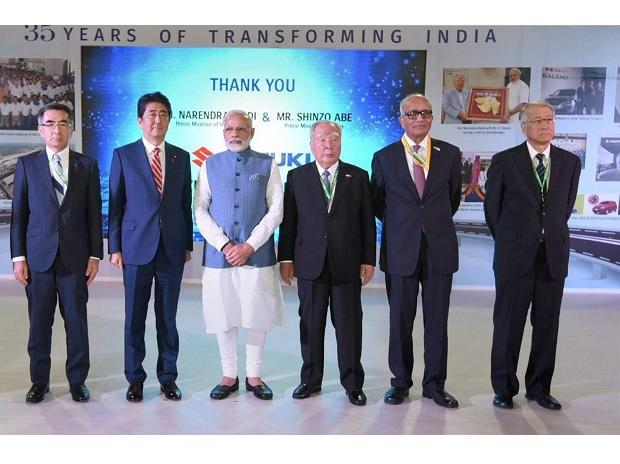 Prime Minister Narendra Modi and the Prime Minister of Japan, Shinzo Abe along with Suzuki chairman Osamu Suzuki (3rd R) and others at the Suzuki exhibition booth during India-Japan Annual Summit at Mahatma Mandir Centre in Gandhinagar. Photo: PTI

The ball was set in motion by starting work on a Rs 1,151 crore lithium ion battery-manufacturing unit in the Suzuki Motor Gujarat Suppliers Park in Hansalpur.


This apart, the company also announced plans to set up a third plant in Gujarat at Rs 3,800 crore, which would take the net investment in Hansalpur to Rs 13,400 crore (excluding the Rs 1,151 crore lithium ion battery plant, which is being set up as a joint venture).


The venture is expected to be operational in 2020. Batteries will be mounted on hybrid vehicles manufactured in India and then the products will be exported.


The move is significant because this is the first time a major original equipment manufacturer (OEM) is investing in making lithium ion batteries, which are critical in making electric and hybrid vehicles.


This would pave the way for making affordable electric powertrain by reducing the battery cost.


Lithium batteries are largely imported, and Maruti itself imports it for its Ciaz hybrid.


Suzuki Motor Gujarat (SMG), the wholly-owned subsidiary of SMC, is investing around $600 million (Rs 3,800 crore) to build its third plant in Gujarat. It will be able to produce 250,000 units a year.


Expected to be commissioned by 2019, with the completion of the second plant, Suzuki’s production capacity in India (Haryana and Gujarat) will be 2 million units, supporting MSIL’s objective of reaching annual sales of 2 million in 2020.


As the third plant comes on stream, SMG's capacity in Gujarat will be 750,000 units a year and the overall India capacity will touch 2.25 million units a year.


In the long run, SMG will have an installed capacity of 1.5 million units in Gujarat. With the third plant, it will employ 10,000 people (including suppliers).