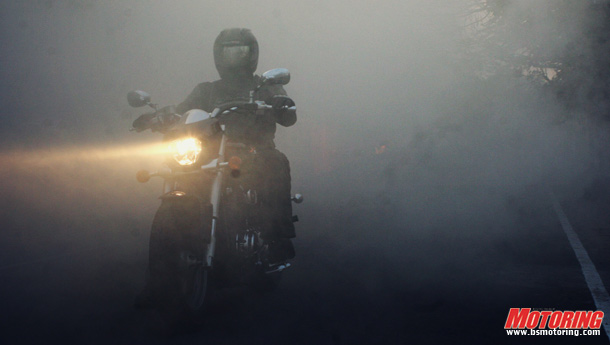 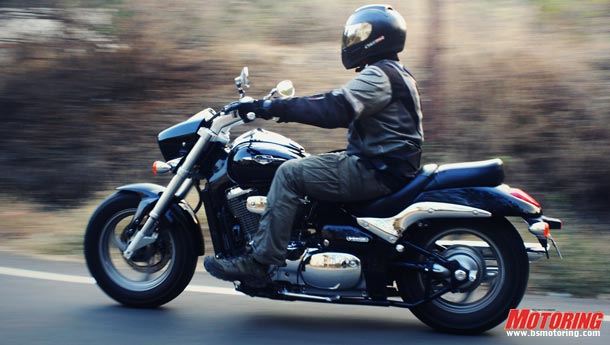 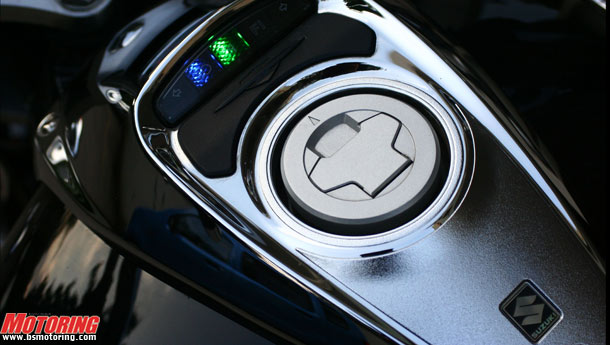 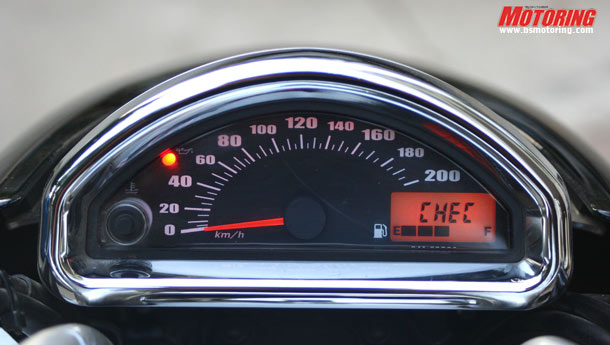 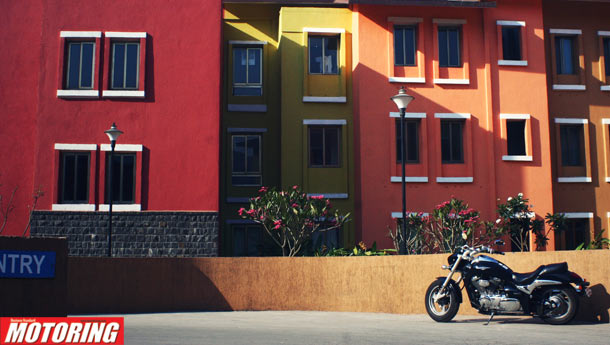 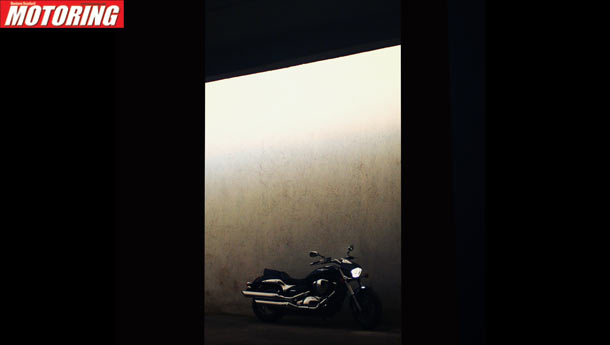 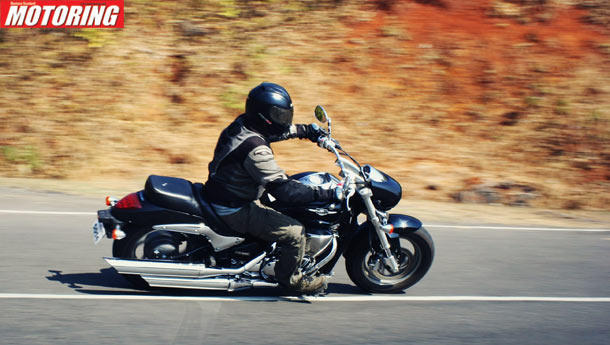 TRIP 0 KM ‘Damn, this isn’t exactly a small cruiser, is it?’ I said to Kyle with my eyes set on the generously proportioned Suzuki parked outside. To my brain, a smaller Intruder was something much smaller. This isn’t small. This is a full-size cruiser. ‘Rides well, though, and definitely looks the part’ said Kyle. First impressions without a kilometre on it? Well, it’s got the quintessential modern-day cruiser look down pat – shiny V-twin taking centre-stage, ginormous chrome pipes providing vocals, plush seating, flowing lines and a beefy, raked-out front. I promptly kit up, hop on and the heft doesn’t escape my attention. Thumbing the starter, I awaken the engine with a low, muffled thrum and ease it towards the gate. Kyle leaves me with a ‘Ride safe, man!’ shout-out, in a manner only true-blue Bulleteers can manage.

TRIP 0.02 KM Exit the gate and there’s chaos outside, courtesy the Mumbai metro project. This could well be a war zone in the middle of Libya, and yet, it’s somehow functioning. Rickshaws pass by within millimetres and commuters cut across my path, but it doesn’t matter – I’m already at ease in the M800’s saddle. This is good.

TRIP 24 KM Office was 17 km of heavy traffic, but it felt more like 3. All I could come up with to say to myself was – ‘This is so darn comfortable!’ on loop. The saddle is more like something Ikea would offer you as a couch, the ergonomics are spot on for any rider of average height and the V-twin, though not exactly the strongest around, is responsive and enjoyable. The suspension eats up pretty much everything our roads can offer (and they do offer a lot) but the raked out front has a tendency to flap hard over rough surfaces. Onwards!

TRIP 27 KM Mumbai is exceedingly pleasant and opening up the Suzie on the Worli Sea Face provides an excellent way to start the day. It would’ve been perfect even, had it not been for the millions of people who cut across my lane to warn me of the most terrible road hazard Indians know of – headlamps running during the day. Of course, riding without a helmet and/or riding on the opposite lane while talking on the cellphone isn’t nearly as dangerous, is it?

TRIP 64 KM After running around like a headless chicken in the office all day, hitting the open road is on the cards. Aditya, coming up with not one but multiple excuses to head home early, hops on as the guest test dummy for the day. Constant reporting confirms that the M800 is exceedingly comfortable, though mild panic ensues when a dog jumps onto the road and I drop anchor. The brakes aren’t a match for the momentum the two on-board have created. With a single disc up-front and a big drum at the back (yes, a drum on a ` 9 lakh motorcycle!), the brakes were completely outclassed by the sheer weight and speed. The rear drum is spongy and the front disc works decently, though the combination needs work, especially given that the motorcycle is capable of good pace and it weighs all of 269 kg, without anyone on it.

TRIP 100 KM The old Mumbai-Pune NH4’s fast-flowing pace is only outclassed by the waning glow of the evening light flickering through the trees, the chilly highway air clearing out the lungs and in turn, the mind as well. This, right here, is the essence of cruising. Eating up the white highway lines at 120 kph is easy-peesy and a bit too relaxing; 130 kph is possible too if you find the road to do it in India, and as the pace goes up, the more your abs have to work to stay upright. If you’re serious about touring, a windscreen is a must. I have to say, though, that they’ve got the vibes just right – not too intrusive, nor is it an over-refined sewing machine.

TRIP 180 Cruising along, humming Clapton tunes when suddenly, a monster traffic jam appears out of nowhere. Notice dirt road running alongside, think for a bit and take the plunge. Surprisingly, the M800 is still manageable and doesn’t grind its belly even once, as truckers stare on in disbelief.

TRIP 195 KM Splendor frantically cuts across. ‘Boss, headlight chalu hai ’ the rider says, with a gesture that could well be interpreted as something dirty.

TRIP 210 KM This Intruder makes the Mumbai-Pune run seem like a suburban commute. The M800 rolls into a parking lot with an old M80 on one side and a M800 (also a Suzuki) on the other. It probably spent the night wondering about the potential connections.

TRIP 230 KM It’s a painfully cold morning – 6.5 degrees, to be precise – but a ride to the twisties is a must. Despite the weight, it’s fairly nimble for a cruiser, when it comes to the cornering bits. The Intruder dismisses fast sweepers with reasonable poise– even at 100 kph – and holds its line well, though, expectedly, cornering clearance isn’t the most generous. Push it into corners even faster and the soft rear starts to buck, though the IRC tyres still provide reassuring grip levels. Good ride quality vs good high-speed cornering? Hmm. On a motorcycle like this, I think I’ll stick with good ride quality.

TRIP 280 KM The 50 km ride coming into Lavasa was nigh on perfect and no, it wasn’t only because of the company. Beyond a point, the Intruder becomes effortless and the heft becomes less obvious. Parked against the colourful architecture and the rather well done waterfront at Lavasa, it looked perfect as it cooled its pipes. Classic cruiser touches meet modern design in the form of the Aliens vs Predator-esque headlamp cladding, the hefty bar risers and the LED tail lights. But look closer and things don’t look as good.

The plastic primary chain cover doesn’t appear to be all that bad, but the cheaply finished switchgear housing, the oddly placed tell-tale lights on the dash and the somewhat crude-looking pegs and foot levers reek of cost-cutting.

TRIP 290 KM Gobble up a fantastic breakfast at the All American Diner. What a way to start the day!

TRIP 460 KM On the road again, heading back to the big city, and the reserve bar starts blinking; on-the-spot mental calculations peg the mileage to be hovering around the 23 kpl mark. Quite good, I’d say, especially with the generous throttle inputs. Filling normal Indian pump gas doesn’t seem to affect it much either, unlike the Bandit 1250S we’d tested previously.

TRIP 502 KM Hit maddening traffic – the worst yet on this bike – and yet, the only reaction the Intruder has to this apocalyptic chaos is the radiator fan coming on. Talk about a cool character.

TRIP 515 KM The road is unoccupied and extending into the dawning horizon. With the data logger locked and loaded, I give it some revs and drop the clutch. The M800 lunges forward, with short stabs of torque being transported to the fat rear hoop – I rapidly shift up, but I hold the revs too long, resulting in a 0-100 kph time of 7.3 secs. ‘This can do much better’ I say to myself. The next run, I short shift and the Intruder reacts with a 0-60 kph time of 3.0 secs dead and a 0-100 kph time of 6.9 seconds. Not bad for 50 bhp lugging around 270 kg of kerb weight, isn’t it?

TRIP 535 KM Chugging along in top on the highway back to Mumbai, I chance upon a bunch of Harley-Davidsons. The comparison with the HDs is inevitable and the thought occupies my mind. I like the M800 – it’s adequately fast, it’s full-size, it’s unbelievably comfortable, easy to live with and will be reliable in the long run – but for the ` 8.8 lakh ex-showroom, it’s still a bit too expensive and the HDs definitely have more character. Yes, it’s more of a full-size cruiser than the Sportsters, but with the price nearing the Dyna league, it just doesn’t feel worth it.

TRIP 558 KM After much time spent on it, here’s what I think. Suzuki, realistically, peg it at Rs 7 lakh ex-showroom, a notch above the Sportsers, iron out the niggles, give it 25 more horsepower and I would wholeheartedly recommend one. Till then, I think I’ll stick to what these folks outside a mall think I’m riding – a Harley Davidson.