Suzuki Intruder and Maruti Suzuki A-Star - Can and Able 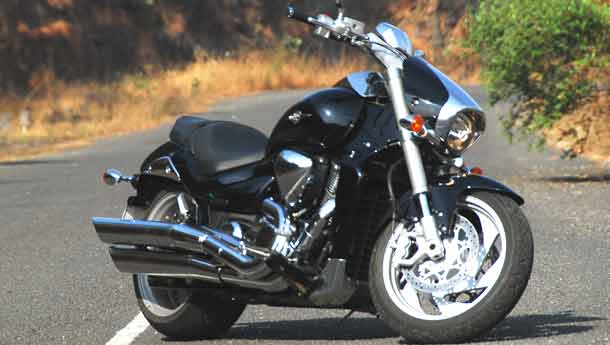 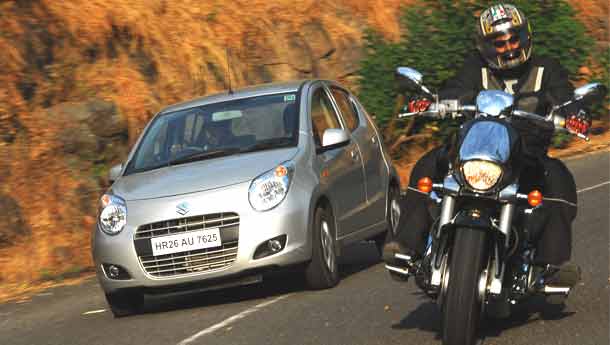 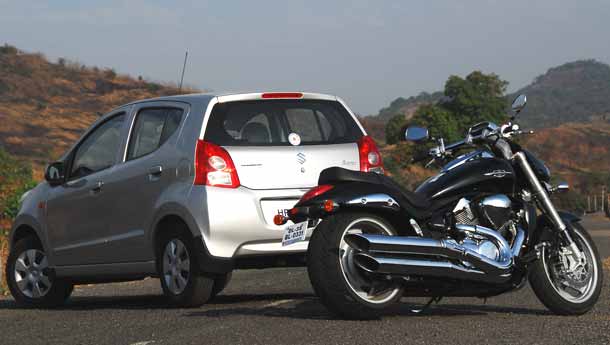 A horde of people converge around it, like a swarm of famished locusts setting down upon a field of ripe barley. As you roll off accompanied by peals of thunder, the crowd immediately parts to let you through, not unlike Moses parting the Red Sea with his fabled staff. But here, the staff is much bigger, bigger than perhaps Moses himself, and with enough bling to make a rapper look like he’s dressed for Sunday church.

With the trumpeting of a thousand angels, may I herald in the M1800R Intruder, Suzuki’s latest offering on our shores. After years of turmoil in the heavens above, the Great Provider has finally decided to absolve us of all our wrong doings and has, in all His great wisdom, blessed us with bikes like these. Following Yamaha and Ducati, it is now Suzuki’s turn to bring in their big machines. Namely two, the Hayabusa and this, the Intruder. We have featured the 2008 ‘Busa in our April 2008 issue, so we thought we’d play with this cruiser instead. And to bring in an additional perspective, we chucked in the cute little Suzuki A-Star into the equation. First, the Intruder.

The One up there isn’t going to give us things easy, no siree! If you want all that show, you have to bloody well earn it. First, heave it off its side stand. Easier said than done, considering that the Intruder weighs in at 347 kilos. Then try preventing the gleam of the chrome from burning huge holes in the retinas of your eyes...

The engine is a nice sounding gurgle at idle but if you whip the throttle, the twin-staggered pipes spew out the deepest yowl you will hear for a long, long time. The huge V-twin 1783cc monster makes a heady 126 bhp at 6200 rpm with 16.3 kgm of torque at just 3200 rpm. In fact, the bottom end torque of the Intruder is so colossal that Suzuki actually had to fit in a torque limiter to prevent yuppies from shredding the rear tyre into soot. Well, no such thing on the little A-Star. The max you can do with it is spin wheels – the front wheels, of course. Power comes from a tiny three-cylinder 998cc engine which loves to be revved hard. Although it’s a compact engine, the output of 66 bhp is quite healthy for its class. DOHC and short skirted pistons help bring out the engine’s rev happy trait and eagerness to shoot ahead. While taking the A-Star to the drag strip will make you the laughing stock for a decade or two, the Suzuki is good enough for the traffic signal grand prix... provided the other cars are least interested.

For a bike of such Biblical proportions, it’s a little unfortunate for your left arm that the Intruder’s clutch lever gets a simple cable operated job. So if you’re stuck in traffic, it’s going to feel like the devil himself is going at your forearm with a torch and pitchfork. The five-speed constant mesh gearbox is a little clunky at times, especially the second gear, but throughout the shifting, it is always precise. Like a well aimed sledgehammer. Compared to that of the Intruder, the gearbox of the A-Star is decent, and in fact much slicker than the other older cars from the Maruti Suzuki stable. That’s because it’s a new five-speed gearbox.

Whacking the Intruder from 80 kph to Warp 3 in top gear needs a mere twist of your right wrist; there’s gobs of dem torque at any given point. However, taking it around a really close curve is like trying to shove a camel through the eye of a needle. But that is understandable, since the wheelbase of the Intruder is 2,450 mm. Besides, if you’re traversing over the bed of the Red Sea, I don’t see you encountering too many hairpin turns anyway. On the other hand, the A-Star is stable on the straights and nimble around the corners, all thanks to a wide track and a quick steering. Throwing it around sharp bends is a happy experience and if you know what you are doing, you will exit the curve a happy man, content with his purchase.

The brakes of the Intruder, surprisingly, do bring this behemoth to a stop. But expecting the big Suzuki to stop in a flash is like asking an auto journo to write on economics or dairy farming for that matter. The front brakes do their jobs well while returning great feel, but the rear brake feels a tad too weak and the pedal is a little mushy.What is certainly not mushy is that huge 240 mm rear tyre, which is the largest fitted onto a production motorcycle. But the sheer bulk of the M1800R makes the tyre fit just right in. The front rubber is amply thick too, with very thick forks leading up to the risers and ultimately finished off with chromed wide bars, onto which a housing (more chrome, ah my poor eyes) holding the tacho meter is bolted. The rear suspension is a hidden monoshock which is shacked to the swingarm and the drive shaft unit.   Yes, I mentioned a drive shaft. The Intruder is meant to be a cruiser and no cruiser is worth its chrome and leather tassels if it copes badly with long distance highway cruising. In that direction, what better way to ensure the 1800’s long haul capability than getting it lugged with a drive shaft that is cleaner, more reliable and needs less maintenance than a drive chain.

Where the Intruder is in its element – cruising at 140 kph at barely 3400 revs and covering vast distances in great comfort – the A-Star however will run out of steam. But the A-Star is not about inter-state travel – it’s about running around in the city, and parking in mustard seed sized parking lots. Mustard seeds? Now that’s also from the Good Book, I am not telling the whole story.

But the Lord is fair. When He creates something, He bestows upon it equal amounts of strengths and weaknesses. The M1800R Intruder, as high and mighty as it might be, doesn’t get the comforts of airconditioning and a roof. Which the A-Star does, among other things. How about ABS, airbags, power windows, stereo and um, cupholders? Compared to the vastness and the bling sections of the Intruder, the A-Star is a dinky little car and is by no way pretentious. The front seats are comfortable and adequate, but the rear is cramped – at the most, the A-Star will seat four normal sized humans comfortably. The boot is not big enough for a family of four though. A medium sized strolley can be plonked in there, leaving space for not much else after that. Instruments are very well designed and come out looking quite fresh, almost straight out of a Japanese Manga comic.

In the scheme of things, these two Suzukis are as similar, rather different, as milk and steak – they both come from the same source yet are poles apart. How then am I craving to have them both in my garage? The Lord works in mysterious ways, is the only thing that comes to my mind!