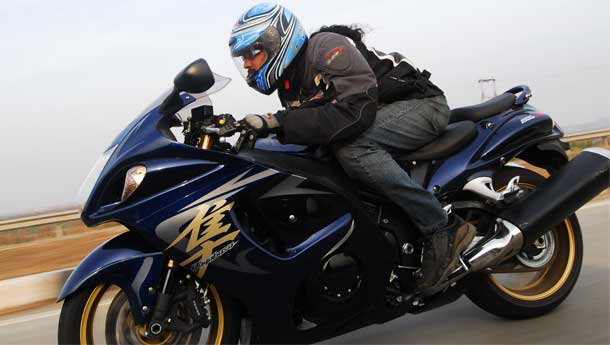 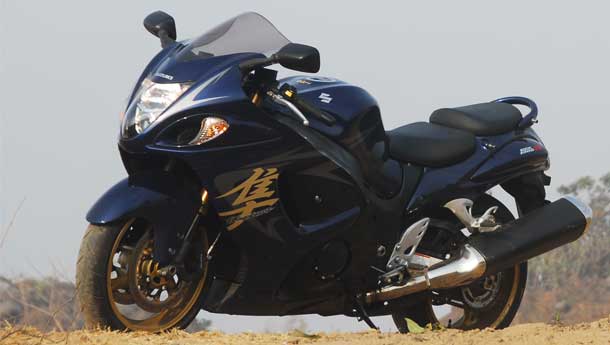 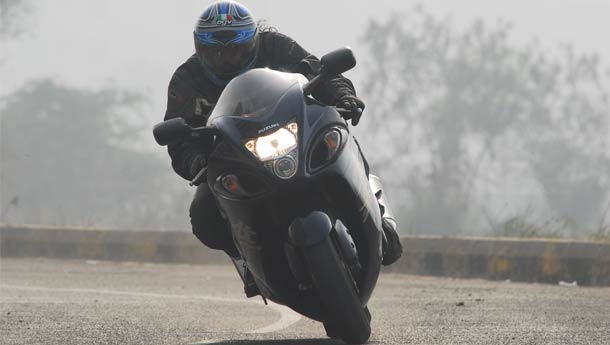 This is not happening. I am covering ground at an unreal pace, 50 short of the indicated top. The acceleration has left my soul far behind. I must have done something right in this life or another to deserve this (though I can’t imagine what that might have been!). Later, I sat next to the bike on a deserted stretch of road with my hands trembling and my eyes closed, listening to the bike cooling down. Tack, tack, tack, tack... it went. Like a pair of high heels in an empty cathedral. It was surreal. And I still don’t believe any of this ever happened.

How can I?
Life has been rather strange over the last couple of days. Everybody is my best friend, I am an instant superstar wherever I go and most importantly, I have God-like power at my disposal. Power that made my entire life flash before my eyes, and yet I was pretty chuffed about it. How? Well, when you redline the fastest production motorcycle in the world in first gear, shift into second and have the front wheel come up a fair amount (at 140), the aforementioned chuffing does tend to happen. That was my official indoctrination into the cult of the Hayabusa, a cult that makes the Kawasaki ZX14R turn a deeper shade of green. And now that the Hayabusa is officially available in India, the sole white ZX14R I’ve seen so far is going to have a tough time.

‘The Hayabusa is a 300 kph bike. Shouldn’t we verify this?’ After everyone was done giving me ‘shut up, boy’ looks, it was decided that the bike is actually a silly-fast sport-tourer, so we decided to test this instead. Drat. The blokes at Hamamatsu themselves have stated that the top speed is incidental. What they wanted was an aerodynamically sound, fast tourer. And they justify this by pointing squarely at the bungee hooks on and under the rear seat. Preying on Blackbirds was never the intention. Yeah, right. Anyway, I had a day to head out and return, the chosen road being the fast, flowing and scenic NH17 up to whatever point I reached until afternoon so I could turn around and head back.   Beauty is skin deep. Who cares?
You either love it or you don’t, but you sure as hell can’t ignore it or mistake it for anything else! Even in the understated blue/gold livery of our test bike, the Hayabusa’s swooping looks gave onlookers’ necks a hard time. Even on the highway, everywhere I stopped, people armed with camera phones and itchy index fingers materialised out of thin air, transfixed at the whale of a motorcycle before them. And I completely understood. I love the way it looks, ever since the bike was launched back in 1999. And it’s been through a redesign last year, making it look more predatory than before. No minimalistic, razor-sharp bodywork for this bird of prey. On the contrary, it looks like someone put a huge slab of soft butter in a wind tunnel, turned the fan on at full blast for a minute and then proclaimed, ‘There! That’s how it shall look!’ Looks more land speed record than series production, I think. The details are all there too. The Hayabusa sticks to analogue meters, which are pretty accurate besides being easy to read; you can always tell exactly how much hell you’ve just let loose even when you’re hanging on for dear life. How thoughtful. All the scoops and ridges are there for just one reason: to go awfully fast. A classic case of form following function and that’s what’s makes it a true modern classic.

It dances too...
In the saddle, I felt at home right away and for someone to feel that on their first time on the bike is a big deal. A deal that makes piloting the ‘Busa very easy indeed. It’s not quick steering like the litre-class bikes, but thanks to the long wheelbase, it is rock solid into corners and you can still change your line mid-corner if you manage to goof it up. While most of my ride was on fast, flowing roads, the twisty section near Kolad was fun as well. No major heroics, but I did manage to scrape the left side feeler bolt a couple of times. The bike gives you confidence proportionate to the fat 120/70 front and 190/50 rear 17-inchers and the equally beefy inverted front forks and rear shock. And the suspension works well in all conditions, from pottering around in traffic to shattering your personal speed records. Traffic jams seemed more severe, now that I had this bike, but the ‘Busa was a baby to manoeuvre through gaps, the size presenting no problems at all. Ride quality was great over all sorts of stretches that I saw that day, which I found very surprising on a 300 kph motorcycle. The ‘Busa’s forgiving demeanour is as commendable as it is baffling. It was almost as if the bike anticipated the mistakes I was going to make and was ready when I corrected them. Now that’s some feat of engineering. Oh, and I almost forgot the brakes. The radially mounted Tokico four-piston callipers that bite the twin 310 mm front discs are so good at their job, that you almost forget that they are the only thing keeping you from standing in front of the Pearly Gates, helmet in hand, wondering how the hell you got there. Two fingers worth of pressure is all it takes to slow the Hayabusa down from speeds that will have heaven anticipating your imminent arrival. The Tokicos are the strong and silent types (much like us BSM folks, ha), and are content to do their jobs, leaving the engine to hog all the attention.

Its heart beats. And how...
And this is what it’s all about: The Engine. It’s what everything else is built around. Holds true for every motorcycle, yes, but the statement is on an entirely different plane when it comes to this bike. I’m sure that you have heard the word ‘flexible’ many times in your life, but to truly understand it, you will need to experience the ‘Busa’s 1340cc super smooth inline chunk of four-cylinder metal. It will roll along at 50 kph with a ‘Who, me?’ on its face, looking as innocent as a Japanese schoolgirl. In sixth gear, you can keep it at 60 kph and even then, all it takes is a twist of your right wrist and it suddenly transforms into a vicious monster. And God help you if you nail the throttle in the first two gears. The greedy intake roar of the 44 mm double barrel throttle bodies under your chin sounds like maniacal laughter as the streamlined shape fulfils its true purpose, melting the world around it into an incoherent blotch of colours. Needless to say, it was slightly unnerving to have such colossal power at my fingertips. And then you get used to it. And then, you can’t do without it.   Even if the power is too much at first, you can always use the Suzuki Drive Mode Selector (S-DMS) to select one of three modes that alter the engine mapping, allowing you to choose the amount of power at your disposal. Quite handy on a twisty road or in the wet and it works pretty well too. Mode A will drive the devil out of hell, B will make him wet his pants, while C will deliver a velvet-gloved iron right hook to his horned head. Take your pick. Lovely, isn’t it? Also, shifting gears is a breeze; not once did I encounter mis-shifts or false neutrals. On the highway, I kept it in A, overtaking endless rows of trucks and cars at will, without any effort whatsoever. On the road, you can always feel the titanic reserve of power that’s waiting to be let loose, but unless you’re in a hurry to meet St Peter, you better treat the throttle with respect. However, the test runs were a different story.

Man, what a rush! The Hayabusa will double, no, quadruple your body’s adrenaline production capacity each time you gun it to get the best possible acceleration figures. The first time, I crossed the double tonne mark before onlookers could say ‘Where’d he go?’, with the blue juggernaut’s howl dominating everything in sight. As I slowed down, I wanted to park the bike, run away and curl up in the bushes lest it saw me again. But soon, I didn’t even need an excuse to go up and down the test strip a couple of dozen times, wringing the ‘Busa’s ear for scaring me silly. It makes you feel instantly comfortable, no matter what the conditions. You’ll never complain for want of power (if anything, you’ll be asking for less!). If you do, you’re either a MotoGP rider or an astronaut. Thankfully, the Hayabusa won’t throw you into orbit; even a relative superbike novice like me could get used to the power delivery, that’s how linear it is. Yet, the times you see here indicate that I wasn’t able to get the best out of it. Not that it matters, really, because the Hayabusa is more than just numbers. Speaking of numbers, one little detail that struck me was the absence of the number ‘300’ on the speedometer. This is one discreet falcon!

In the end
Nonetheless, the Hayabusa is anything but discreet; what it is, is an epic experience. The sheer scale of the heart-stopping power will leave you breathless and yet, you somehow know that the bike will not bite back, provided you’re not foolhardy and think that you can overpower it.

Riding it in traffic is not akin to sitting on a furnace, a surprise for a superbike again! Another reason why it’s a superb all-rounder. Of course, I spent more money in three days filling it up than I usually do in three weeks, but you think I’m complaining? It’s an addiction I was more than happy to feed and I’m already dreading the withdrawal symptoms that’ll kick in once the bike goes back. Those lucky enough to own it will know the amount of attention it attracts and the ‘Busa basks in the glory. The faces of both grown-ups and children light up when they see the bike. Even those who have no clue as to what they’re looking at know that they are witnessing something special. Dogs all over the city, who are usually trying to get a piece of me, don’t even bother chasing. ‘What’s the point?’ they seem to bark. An elderly gentleman even called me mad for riding this ‘mammoth of a bike.’ Later that night, before I switched it off, I put my head on the tank and revved it as far as it would go and just before going deaf, I heard my heart beating faster than it ever has. The gentleman was right.