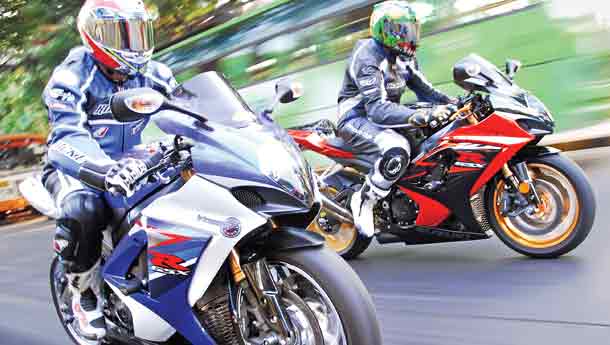 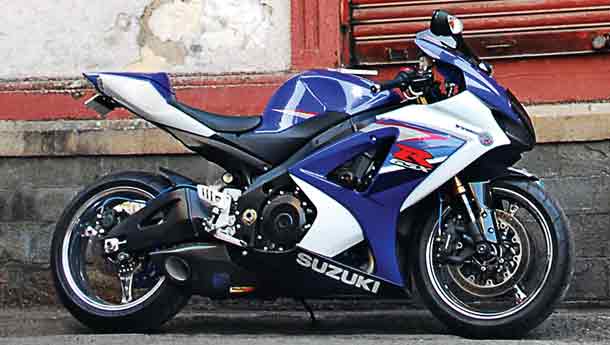 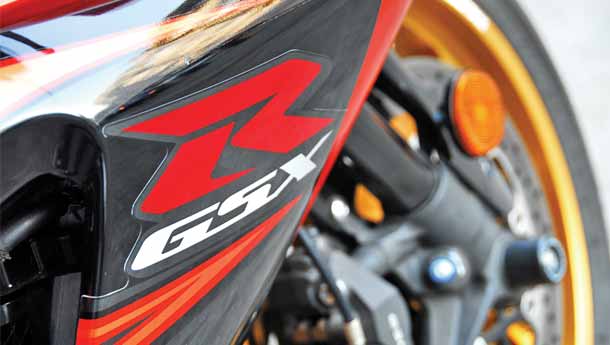 The bars go light in my hands. One minute,the Suzuki is a tightly packed projectile of just-about-contained violence. The next instant, the rear tyre is pointed at the scenery, the front wheel is straight but not entirely in touch with the tarmac. I’d love to tell you what I was thinking at the time, but I’m discovering that I can’t think as fast as the Suzuki can bite off a careless hand. Thankfully, the metal plate we just passed over – a typically Mumbai solution to a plethora of road problems is to lay flat, thick metal plates over it – runs out and grippy tarmac seems to settle the rear. The snap of the wheels getting back in line causes me to open the throttle suddenly, and in the next frightening instant the Suzuki rockets forward like a barely aimed shotgun pellet. The baritone roar gains an alien ferocity as the buildings on both sides begin to rush by fast enough to appear as one, continuous grey wall. Living with this much power cannot be easy. And we’re going to find out just how easy it isn’t.

Welcome, then, to a near-400 bhp morning. Yup, that’s two 2007 Suzuki GSX-R1000s, each making 185 bhp in factory trim at the crank – motorcycles at the very cutting edge of street-going two-wheel tech. And then Prasad Divadkar (copper/black) and Vivek Jaising (traditional Suzuki colours) went to work on them. Neither likes it stock, and neither has held back. Their motorcycles, then, are the spiritual equivalents of a privately owned military Hummer. Devastatingly potent, but used to generate laughs rather than turn their enemies into erstwhile foes.

So the copper/black Gixxer wears super light wheels, while the other one has stock wheels, but in lovely chrome.  Both have loud, loud, loud cans, power commanders to take full advantage of the pipes, and Jaising’s even got a quickshifter added. There’s so many bits and bobs in there that more than once on this glorious, earsplitting morning, I found myself asking the duo whether that normal looking part was, in fact, stock. The answer, as it turns out, was no. In this state, both bikes are close to 195 bhp at the crank, and I can tell you one thing. Think of the best way to liven up a muggy, warm morning, and you won’t even come close to this – two vocal GSX-R1000s.Instead of heading out onto the highway to figure out the motorcycles, we chose to head into the heart of Mumbai this time. The sound  ricocheting off the surrounding urbana was incredible. It was almost as if the bikes had their own captive audience, which was always clapping appreciatively. The superbike soundtrack was a shoo-in for a multiple platinum, and this, really, I could live with. Even if my neighbours couldn’t.   Both the motorcycles have just returned from a track day at the Sriperumbudur track and while the race fairings and race rubber have been returned to their storage cubby in Prasad’s garage, the suspension is rock hard and the intensity of the response from the engine is at once a thing of wonder, and as scary as being thrown off a cliff. Imagine if suddenly you had the power to alter the lives of any human being you chose, in any way you liked. The power would thrill you, but the sheer weight of the responsibility would keep you up at night, right?

The GSX-R1000s are like that. Sub 3-second runs to 100 kph, and a top speed nearing 300 kph sounds impressive on a spec sheet. Taking off from a traffic light, it’s bloody amazing and deeply perspective altering at the same time. The raw power is a drug you could get high on. And irresponsible use will kill, almost literally. Scoring an own goal was never easier. Sometimes, when I happened to open the throttle in my usual jerky manner, the Suzukis produced such impressive performance that you’d almost be willing to believe that you’d get somewhere before you left and be too scared to leave.I’d tell you about the rest of the motorcycle and all, but it’s the sheer depth of the power that is the central part of riding it in town. You filter past the drowsy morning traffic in a total contrast. They’re heading to work, you’re out for a blat. They’re still rubbing sleep out of their eyes, you’ve had any vestiges of sleep sucked rudely out of you from the first angry blip. They’re hum-drumming down the road, you are perched on the fiery edge of a nasty-great aural explosion that won’t end until you hit the red switch. BWAAAAA goes the bike, BWAHAHAHAHA you’re going inside the helmet. It’s symphonic and symbolic at the same time.

And from whatever speed you’re at, sneak the throttle open and in a roaring wall of sound and just a hint of windblast, you’re a 100 kph faster, a kilometre or two down the road and someone’s turned the volume up again. Just knowing that, in fact, helps you when going slower. It allows you to smile indulgently at car drivers crawling at a groggy 40 kph up the top lane. Or to brake gently for pedestrians who’ve been struck dumb in the middle of the road by the sight of two sleek, evil-looking beasts snarling down the road. It’s all right, you’re still way faster than they think you could be. You’re a magician for the morning. In the twist of a wrist, you could turn the gaping mouth into a tiny speck in the mirror.

Of course, public roads in a congested town is hardly the place to enjoy the performance potential of these motorcycles. Neither, it would appear, is Sriperumbudur. Vivek says, ‘The GSXR inhales the main straight so fast that I decided not to bother trying to tuck in and go fast. Exit the last corner, get’er up on one, roar down the straight, saving front wheel wear, until it was time to brake for turn one. Much better. But the corners are next to useless on a motorcycle like this. Everything is 60-80 kph, and only one turn is about 110 kph. At least one gets to go as fast as one dares in complete safety... we need a faster track.’

On the road, his ferocious motorcycle is relatively easy to ride. It keeps trying to murder your wrists, punching out your kidneys, but that you can live with. The angry roar abates a bit when you calm down, the worst of the bumps are mitigated somewhat and the low-speed balance is superb. I managed to get caught up in two rather large traffic queues and both times, I found it effortless to growl along below 30 kph without having to put my foot down or wobble about like a screwy top in an earthquake. The motorcycle protests, of course – radiator fans come on with a disapproving hum, your thighs begin to sear, the coolant temperature shoots to 105-107 degrees and your wrists continue dying. But that aside, it’s a sweet-natured kitten. No, really. See the international comparison tests, the Suzuki was perpetually singled out as being as hard core as the rest of the litre-class gang, but the only one with an easy street manner. The ZX-10R, by comparison, will chew you up and spit you straight into the waiting room outside your favourite physiotherapy location.   And until I find another empty stretch so I can scare myself again, let me tell you about the 2007 model GSX-R1000. The 2008 model is actually identical, paint aside. So if Suzuki were to announce a CBU import program around September 2008, this is more or less the GSX-R1000 you could buy from a suitably equipped Suzuki showroom. The 2006 model, also known as the K6, is regarded as the best damn GSX-R1000 ever. And I remember fondly my time with it. You tend not to forget the few times you reached out and thumped the horizon on its nose.

From that stratospheric platform, the 2007 model was hewn. The biggest problems with fast motorcycles is that they tend to wheelie. No, really. A motorcycle pawing the air isn’t going as fast it could if the front wheel was down. Substantial energy is being ‘squandered’ keeping the thing in the air, rather than being punched through it with shattering force. So the big change is that the 2008 has a shorter tank. This moves the rider forward, makes his reach to the bar short and puts more weight on the front wheel, so that the engine can gather momentum at an even more alarming pace. The chassis uses fewer parts, and is therefore lighter, but the big change, and one that not many liked, was the addition of a massive, heavy exhaust system with a can on each side. But the 2008 emission norms are very tight, and the ‘Zook needed to clear it, so that gigantic system was needed. Thankfully, the aftermarket allows you to easily rid yourself of the 8-9 kg weight and move to a lighter, more ear-pleasing space.

And finally, of course, the new bike’s gotta be faster than the old one, right? So the ‘07 gets just under 10 percent larger ports, bigger exhaust valves and more cooling capacity in terms of both oil cooling and the green stuff. Finally, the engine is massaged with a set of more aggressive cams – and the K6 was hardly a docile pooch to start with – and 12-hole injectors that work the fuel harder, make bigger bangs and return bigger thrills.Then there is the engine control software. The computer’s four times faster (you wish the bike itself was, no?) than before and the loved/hated S-DMS switch makes an appearance. S-DMS, or Suzuki Drive Mode Selector, is a harmless-looking toggle switch that sits at your right thumb. Toggle up to A to enjoy the marvellous 998.6cc engine at its finest, toggle down to B to enjoy an eye-widening but much calmer experience, or come down further to C mode and enjoy the feeling of an attentive, docile motorcycle that’s still fast enough to smoke traffic, but might make riding in the wet a bit easier on you.

These are all words on a piece of paper once the traffic opens up. Roll the throttle open as fast and as hard as you dare. Hear the chirrup from the rear wheel as the GSX-R1000 punishes its own rear tyre like a pissed off maths teacher with a differential grudge. In a hint of blue smoke, the rev needle skips up in 2,000 rpm hops towards the 13,750 rpm redline. The speedo makes less and less sense. And in seconds, you are miles away.Corners along the way present no problems if you can keep your throttle work steady. The 2007 was designed to be intuitive and easy, and it is. It follows your directions to the letter, can turn in racer-fast or cruiser-slow on demand, and yes, unlike the maths teacher, it has a good heart too. It’ll forgive you most of the time. The brakes have the instantaneous brick-wall effect down pat, and are friendly to use despite and most certainly have the guts to keep you out of trouble.

From whatever I’ve read, the K7 is a pleasure to ride at the racetrack. It makes your attempts at going faster look good, and makes results easier to come by. It gobbles up the straights and slices through corners and is easily among the best motorcycles on the planet at the moment. And I’m on it. One minute you’re a quivering mortal wearing motorcycle kit. The next you’re wielding unimaginable, incredible, endless power... God bless the Summer of Speed.