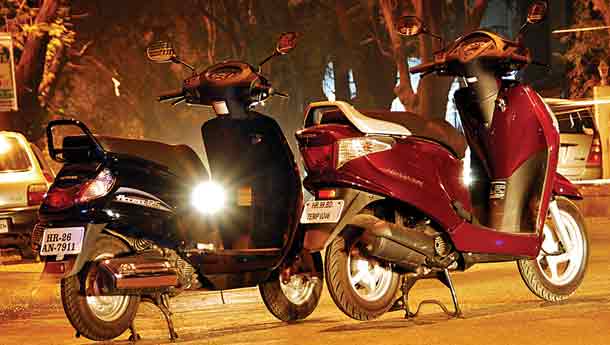 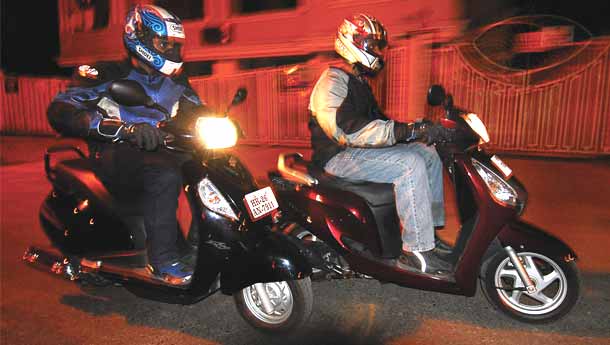 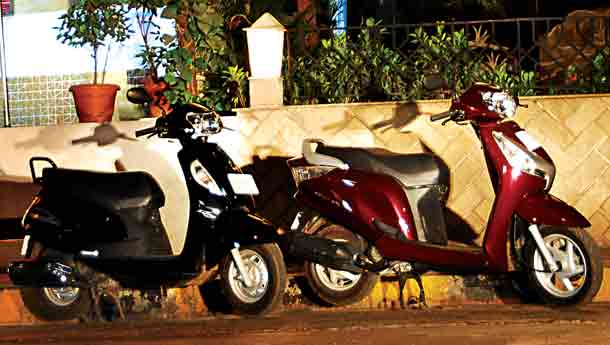 Ever since I had a bit of an off in mid-January, a persistent pain in the left foot ensured that shifting gears was out of my riding envelope. The result was a happy one, actually. I’ve been zinging the Suzuki Access to work daily since then, and I must say I’m impressed.

My commute is pretty interesting from the testing perspective. There’s two or three stretches where you get royally stuck. Wave a thank you to Mumbai’s new Metro, to under construction flyovers and schools that have lots of children, scores of buses and not an iota of an idea on how to park the big yellow things without severely obstructing traffic. And yet, there’s one gigantic, high-speed sweeper where you can max the speeds on the scooter for almost two km, a fair smattering of slow-speed kinks and a few stretches where relatively spacious roads and light traffic allow the scooter to do what it really does best – twist and go.

When Honda launched the Aviator, it did seem to be a lot more than the specification promised. So when we got our test Aviator, I parked the Access for a while and used the Aviator instead. For the purpose of this test, I pitted one against the other over the commute to see what the difference was. Data logging the commutes only served to highlight the differences in the two scooters and as a tester, having hard data sit exactly where you think it should is a good feeling. So, let’s get stuck right into it, then.   Design, Build, Finish
Both the scooters are as Japanese as Tokyo itself, which means the build and finish are almost automatically fantastic. Neither scooter has as much as a line out of place and we’ve seen the venerable Activa age really, really well. We’ve not spotted a tatty Zeus either. So the portents are great too. We would wager that neither scooter will fade for years together.

What does separate the two, however, is the styling. Just check out that Aviator. Repeated references to the Honda Civic notwithstanding, it’s neither meek, nor sleek. Instead, it looks upmarket, classy, and almost elegant. Initially, we thought the looks were all right, but in time, they’ve grown on us. On the other hand, we feel almost sorry for the Access’ engine. Such an enjoyable powertrain wearing that rather dowdy look is like seeing Gisele Bundchen dressed as a three-man tent – safe, but not particularly likely to get you a second glance. Seriously Suzuki, that motor’s a proper firecracker, so how about we ditch the tent and get it the scooter equivalent of a flattering two-piece swimsuit? Now there’s a fully cosmetic variant that we could properly drool over.
ACCESS: ***
AVIATOR: ****

Engine, performance
Yes, the Access is a genuine rocket. On our commute, all of the throttle open areas show the Access carrying a hefty 10 kph advantage, which is pretty massive. Over that long, long sweeper, the Access sat at around 90 kph, while the Aviator had to be dragged up to its low-80s top speed. Over 2 km, this gained the Access a full 80 seconds. It doesn’t sound like much, but over a 25 km commute, things like this do add up. While one isn’t suggesting that the commute is a race, would you rather take longer to get to work?

On the move, the Access is clearly the perkier one, and its greatest advantage is the peak torque, which is at the same place as the Aviator, but a full 20 per cent higher. This is also the reason why performance tests later see the Suzuki show the Honda a clean pair of heels. Now, you might argue that this is exactly how it should be, given that the Access carries a 22cc advantage. And you would be right. But if they’re the same price, which they are roughly, the argument holds.

In refinement terms, there’s nothing in it. In character, the Aviator sounds distinctly more laid-back, even sweeter. The Access sounds eager and enthusiastic and I can say with confidence that you can’t listen to that engine and not roll the throttle open all the way. Taking off from traffic lights, not much is going to come past the Access to 40 kph, which is rather enjoyable. And finally, the Access wins this part of the contest easily by offering a confident surge that makes overtaking, even at speeds nearing 60 kph or more, effortless.
ACCESS: ****
AVIATOR: ***

Handling
After writing for years about the pitfalls of trailing link suspensions, I am thrilled to be riding two tele-forked scooters. And they’re both good, although miles different in feel. The Aviator is taller and feels it. When you hop off the Suzuki and onto the Honda, the latter feels just a bit awkward, sort of like watching a seven-foot man walking into a posh restaurant. Ridden alone, you don’t notice it as much. In town, either scooter is perfectly at home making time through gaps. More power allows the Access to feel a tiny bit more stable, although the rubber on the rims would suggest that the Aviator has the advantage. Through the kinks and on the sweeper, it’s the Access that inspires a little more confidence, and that is why it has a half-star advantage.
ACCESS: ****
AVIATOR: ***

Ride quality
Again, there’s isn’t really much in it. But once more, the Access recorded faster average times through the two or three really rough patches. At the same place, the Aviator rider has to roll off the throttle a bit as the scooter tends to bounce a little bit more. That said, both offer tremendously good ride quality, far ahead of any of their siblings. Even the otherwise great riding Kinetic Blaze will give an arm to have the sort of composure and wheel control both these are capable of.
ACCESS: ****
AVIATOR: ***   Braking, stability
Both the scooters are as stable as a fully loaded supertanker on a calm sea. Pretty much unflappable, both brake admirably well too. However, the disc brake is the Aviator’s saviour. It feels more or less like a really powerful drum brake, but has enough power to make the rear end of the scooter go light on demand. If you need more braking power than this, you’re just going too fast for the situation. That said, in the performance tests, I found it hard to get enough feedback from the Aviator’s front-end to apply full pressure and produce a really hard stop with confidence. Which is why, when you see the numbers, the difference isn’t all that much.
ACCESS: ****
AVIATOR: ****

Features, instrumentation
Okay look, neither scooter has the feature strength of the Kinetic Flyte or the Bajaj Kristal. But despite that, the Aviator is pretty basic. Seat release requires you to use a second lock and the seat on our Aviator would torque off to one side when I let it fall and lock, which made it feel messy. So though we like the functional instruments on the Aviator, the Access’ one-key operation nets it a half point extra. If the Flyte/Kristal were in this test, though, both would lose points to the front apron fuel fillers and storage lighting etc. The Aviator also loses more ground because you (still) have to purchase the sidestand as an extra. We were offered a safety-related explanation by a Honda staffer at the first ride, but we’re not buying. Hondas all over the world – not to mention the Unicorn and the Shine – come with them, so ‘people will forget to flip it and fall over’ is not a valid argument.
ACCESS: ***
AVIATOR: **

Verdict
As I said before at the first ride, the Aviator is surprisingly good to ride. The spec sheet defies you to enjoy riding it, but somehow you do. It is one of the best looking scooters on the market at the moment – and we admit that isn’t saying all that much. But Honda’s choice of going with the (great) 102cc engine from Activa proves to be the straw that becomes the decisive factor in this test. The Access may not have the looks, but it has the measure of the Aviator in every single department, and is clearly, clearly ahead on performance. The base Aviator, with steel wheels and a drum brake, neatly sandwiches the Access on price, while the full options Aviator costs Rs 2,000 more.

In terms of buying recommendations, both are eminently good purchase candidates. The Honda will probably hold higher residuals, but is also more expensive. If you’re into the swish bits, and want a scooter with proper alloy (only front) wheel and disc, the Aviator should be your pick. In every other case, we’d put our money down on the superb Suzuki Access.

Honda Aviator:
parameters
Styling: We’ve actually grown to rather like it
Engine: Is still the same, so ultra-refined. But not that powerful
Handling: Stable, precise and almost motorcycle-like
Ride: Improves over Activa, but Access feels a smidge better
Brakes: Finally, a scooter where the rear goes light under braking