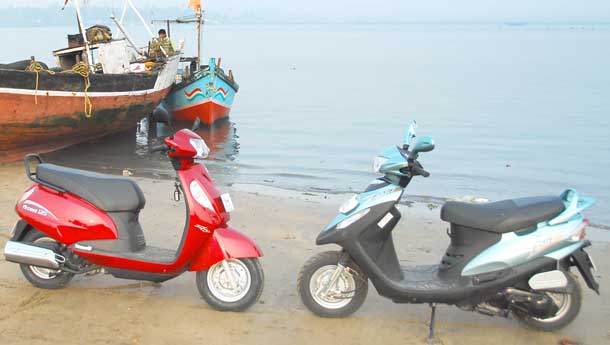 Pablo ‘the quirky’ Chaterji has this penchant for rising early. No, it’s not about leading a healthy life, but about getting that perfect picture for the lead shot of a story. So here we are,  yawn, at the crack of dawn on a desolate beach in north Mumbai. The air is humid and still and the sun is slowly rising from over the horizon as we line up the Suzuki Access 125 and the Kinetic Flyte. Pablo’s on a roll – you can tell by the sound of the shutter snapping away. All is well until, at that unearthly hour, an unruly gentleman who claims to be some kind of ‘authority’ shows up. Rs 8,000 is the asking price. I summon my negotiating skills and whisk the said gentleman aside, while Pablo refuses to relent with his shutter finger. I let the guy sample my fine multilingual competence (or lack thereof) and convince him to walk away with, hold your breath, an 8 buck chai. I have a career in diplomacy ahead of me.

That done, we scampered out as fast as our scooters could take us before my con was found out. I was on the Access with Saraid, my riding buddy, in tow on the Flyte. In saying so, let me tell you that the Access was a better choice for the getaway, because although heavier by four kilos it does the sprint to 60 kph in just 9 seconds, while the Flyte was 0.7 seconds slower. The Access is powered by a 124cc, ultra-refined motor that makes 8.58 bhp@7000 rpm. The engine is pretty smooth and has a muted exhaust note, which makes the Access go about its business quickly without creating any drama whatsoever. The Flyte, on the other hand, is down on power by 0.5 bhp and on torque by 0.1 kgm, at 0.9 kgm@5500 rpm. However, a rorty engine with a neat note and just the right amount of vibes makes the Flyte feel like a more action-packed machine.

Both the scooters here are a first of sorts; the Access 125 is Suzuki’s first for India while the Flyte is the Kinetic-Sym venture’s debutante. The reason for this comparison is a no-brainer, actually. Both the Access and the Flyte have 125cc powertrains. When seen next to one another, the Access looks quite substantial compared to the Flyte and it has quite a few styling cues borrowed from various scooters from the, ahem, Honda stable. For instance, the mudguard and side-panels resemble those of the Activa, while the front indicators look as if they’ve come from the Pleasure. Still the Access is a handsome looking scooter – it’s like Sly in Rocky VI, able to throw meaty punches despite looking slightly er, mild.

The Flyte, on the other hand, is more contemporary looking. It’s already popular in various international markets as the Sym X-Pro. In a few words, it’s sharp, stylish and small-ish. The Flyte’s got some neat looking matt black panels and mirrors, like on modern day superbikes – ones which pivot at the arm rather than the mirror itself – making them less prone to vibes. The Access too has some clever touches. The foldable aluminium rear footpegs, for one, are well-designed and click-lock into place unlike those on the Flyte, which tend to move around. The speedometer console is also more old-school than that on the Flyte, yet somehow doesn’t look out of place, while both scooters sport similar gadgetry in terms of switches and anti-theft locks. My grudge with the Access is the big chrome covered silencer. It needs to be inclined parallel to the lines of the side panel, so that it doesn’t look like an afterthought.

Later, as we were testing, we ran out fuel on the Access (yes, it happens to the best of us) and a middle aged gentleman, who was gingerly riding by, stopped to have a look at the fuel transfer in progress. He overlooked the Flyte completely and grilled Pablo on the Access. Pablo, of course, obliged like a diligent Suzuki sales person and sold him the Access hook, line and sinker. I couldn’t help but look on in disbelief, wondering how in the world he missed the Flyte. Clearly the Kinetic-Sym wins in the styling department, but for many, size does matter.

That scooters have been improving slowly in India is known, and one big fact that proves this is that both these scooters are shod with telescopic forks. Gone are the days of the nervous linkage suspension and my apprehensions of pushing a scooter around corners. The Access is firmly sprung and tends to send a few shocks through. The fact that the seat offers no cushion to these bumps doesn’t help, but riding two-up with Saraid, I later found that the ride quality had increased tremendously. Around corners, the stiff suspension along with the  90/100-10 tyres weren’t as confident as I’d expected them to be.

The Flyte is a bit mushier and absorbs much more before it decides that it’s time for you to feel bumps. Once again, the telescopic forks work well and the right choice of tyres allow you to push the Flyte into corners at side-stand scraping angles. Later, as Saraid and I exchanged notes, we came to the conclusion that the ergonomics of the Flyte helped in cornering confidence. Unlike the Access, where you’re sitting upright and over the scooter, the Flyte allows you to feel at one with it. We also agreed upon the fact that the 130 mm drum brakes on the Flyte were at par with the 120 mm drums on the Access when it came to bite and feel.

Both these scooters are extremely well built and have exceptional levels of fit and finish. Yes, both are comparable to the market leader, the Activa. And if you thought we were done with our adventures for the day, hold on. Or at least I wished I had. Our shoot, I painfully admit, ended when I piloted the Flyte into a corner, hitting a bump and going airborne. The Flyte, er, flew into a nearby field and came out with a broken brake lever, mirror glass and a few scratches. And believe me when I tell you that a crash of that intensity could have permanently laid a machine to rest.

So then who wins? To be fair, both the Flyte and the Access are 125cc machines, but that’s as far as similarities go. The Access, at Rs 42,730 (as much as the Activa) is ideal for the no-nonsense type of customer who, like the middle-aged gentleman (who’s probably already booked one) wants nothing more than a reliable scooter. But for Rs 37,400, the Flyte is the scooter that the younger, more energetic bunch of individuals like me would love to use as a daily runabout and a little more. So Kinetic, can you please fix the Flyte and send it back to me?