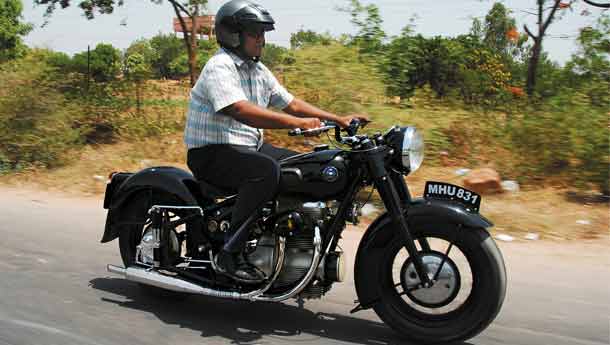 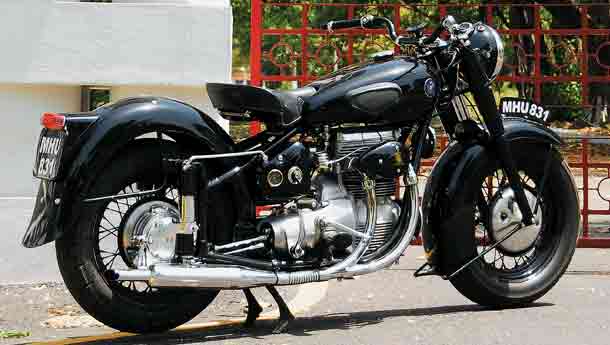 Imagine Gregory Peck on a motorcycle with Audrey Hepburn riding pillion. Now that would be a sight for sore eyes, no? Now I’m not really sure if either of them ever rode motorcycles, but I am convinced that if they did, it would certainly be a gleaming black Sunbeam S7.

The Sunbeam S7 was introduced in 1946 as a ‘Gentleman Tourer’ offering ‘long lasting luxury’. At the time, this constituted a major detour from the then-current clichéd biker image – antisocial attitude clad in black leather. The S7 was big, intimidating to look at and was offered in a highly glossy enamelled finish in just one colour – black.

The S7 may seem as thoroughly British as bikes go, but ironically, it was loosely based on BMW R75s that were German army standard issue and captured by the Brits. However, the company decided that the BMW looked too German and chose to ditch the flat-twin engine in favour of a newly designed 487cc parallel twin fitted with an overhead cam setup. The motorcycle did retain other features from the BMW, like the shaft drive. And thus was born the S7. Unlike later models, the initial S7s were sold without rubber mounted engines. However, these bikes vibrated so badly that all of them had to be recalled to be retrofitted with rubber engine mounts.   BSA,yes BSA, had envisioned three variants around this engine –  a Tourer, a Sports version and a rigid Trials version. The Sports prototype was fitted with high compression pistons and a reworked camshaft and was good for about 150 kph. However, neither the Trials nor the Sports version saw the light of day and were never brought into production. The tourer became the S7 as we know it.No amount of pictures can ever do justice to the Sunbeam S7. This became apparent when I saw the motorcycle for the first time in the metal. Everything about the bike reflects elegance and taste. The huge mudguards have a flowing look and would be very efficient in preventing slush from spattering onto the rider’s trousers and brogues. The headlight nacelle is enormous and is embellished with the Smiths speedometer and two tell-tale lights. Towering 20-inch tyres with imposing sidewalls add to the charisma and eccentricity of this machine and were very befittingly nicknamed donuts by motorcyclists of that era. The attention to styling detail ensured that the carburettor was ensconced in a fetching tear drop cover.

One of the first few things one notices about the bike is that the handlebar is devoid of any cables. All the control cables run through the handlebar and culminate in the inverted control levers. The left twist grip controls the high-low beam and the right twist grip is the throttle. There is no decompressor lever on this motorcycle (unlike most other Brit motorcycles) because it was a low compression engine and very unlikely to hurt a gentleman’s knees early in the morning.And when you did get it running, the imposing air-cooled vertical twin put out about 25 bhp. The relatively long-stroke and slow revving engine liked to takes its time getting up to speed, with an Amal feeding the lazy behemoth its explosive diet of fuel and air. The torque is transferred to the gearbox through a single-plate clutch – very similar to that of a car. An exposed drive shaft does the final job of getting the rear wheel moving through a bevel and worm gear setup. These drive-transmission units are very robust and have been known to have lasted in excess of 160,000 km.

Taking the bike off the stand was a whole new experience for me. I tried to take it off its main stand in the same manner as one would with any other motorcycle, but it just wouldn’t budge. At first, I wondered whether skipping my breakfast could have had such a dramatic effect on my strength. But then Colonel Shashidharan dispelled all those clouds of doubt by pointing out to the foot operated mainstand lock release lever with a naughty grin. The lever needs to be depressed to allow the bike to roll off its mainstand. This brilliant system was designed to prevent the bike from moving off its stand accidentally. The bike was extremely easy to put on stand and definitely did not need somebody of the Khali persuasion to get the job done.

Now came the highlight of it all – riding the S7. Swinging your legs over a motorcycle which costs more than the 5 year budget of a small African country with the owner intently watching your every move is far from easy. After sweating buckets in anticipation of riding the machine, I was sweating even more now, hoping that the Sunbeam would go easy on me. The last thing I wanted to do was to go around a corner and stall it midway. Or worse. But the S7 cut me plenty of slack. It started with the first kick and the engine turned over very easily thanks to its low compression and chilled out state of tune. The rubber mountings did their job pretty efficiently and hardly any vibrations percolated through to me. This motorcycle is no speed machine, and no siree, it’s not even remotely manic. The image I got in my head was of a flannel-suited, well-bred gentlemen thundering magnificently up to the door of the lady’s house on an S7, rather than powersliding through the estate on a wild, high-compression single, wearing greasy leather and a leery smile. Speed was not of the essence; style and grace were.Shifting through the gears in the 4-speed gearbox was a breeze and the cogs slotted into place effortlessly. This from a motorcycle that is more than six decades old. After I slotted the gear into place and as the clutch was released, there was a peculiar twitch towards the right at the rear of the motorcycle. This twitch was very faint and is commonplace with most shaft driven motorcycles of the era. It’s quite amusing and honestly, I quite enjoyed it!   The S7’s sheer size and weight showed while cornering but it wasn’t bad enough to make the hair stand up in alarm. Yes, it does take some getting used to. The brakes were not sharp and it took me some time to heave the machine to a halt. The rear ‘plungers’ and the dual forks up front, with their single central ‘girdaulic’ damper, did a good job of keeping my bones from rattling out of their sockets.The seat, oh the seat, is luxury taken to the hilt! It is mounted on a very peculiar cantilever linkage system that efficiently acts as additional suspension. The seat itself is wide and comfortable and surrounds your rear in soft and supple leather. If you’d ask me, I think the S7’s seat is the motorcycle equivalent of a La-Z-Boy couch!

The Sunbeam S7 gracing these pages was bought in a pitiable condition by P Ravi Kumar in 1998. It took him about eight years to get hold of the many missing parts, many of which had to be imported from the UK.It took another two years of painstaking restoration to get the motorcycle on the road but the result is impressive and the S7 rides like it rolled out of the factory just yesterday!

A big thanks to Ravi, Colonel Shashidharan and Sandesh for allowing us to ride this phenomenal machine.