Even as peers are struggling for growth, Balkrishna Industries (Balkrishna) is expected to benefit from strong demand for agriculture tyres. This, coupled with backward integration, is expected to help Balkrishna post strong revenue growth, as well as improve profitability. The stock, which has gained over 40 per cent in the past three months, is expected to get support from demand trends.

Led by Europe, agriculture tyre exports from India have been strong and were up over 40 per cent year-on-year (YoY) in July. Balkrishna is expected to be a major beneficiary of this trend as it gets 60 per cent of revenues from agriculture tyres; Europe accounts for half its revenues. While year-to-date (YTD) exports are still down, analysts expect the positive trend, which started in April, to continue.

The other geography which should aid growth is the Indian market; it accounted for a quarter of Balkrishna’s volumes in the June quarter. Government policies for the farm sector, favourable monsoons, and strong sowing in the current season are expected to be demand triggers. The firm can improve its market share, given the expansion of its reach in the Indian market and a low base. 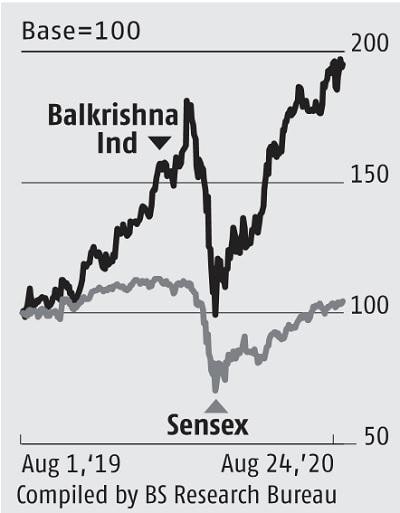 Its agricultural tyre share in the key markets of the US, Europe, and India ranges from 7 per cent to 15 per cent. However, the bigger opportunity for the company to gain market share by both value and volumes is in the industrial tyre segment (mining and construction), where it has a share of under 3 per cent.


Balkrishna is looking at doubling the same over three years. While the company posted an operating profit margin of just under 27 per cent in the June quarter, it has guided for a margin of 28-30 per cent for FY21. This is on the back of lower commodity costs (crude oil derivatives) and backward integration.


Most brokerages have upgraded the stock on the back of higher volumes, increased margins, and higher free cash flows in FY22 as it completes its capex. While prospects are sound, the stock, which has gained 95 per cent from its March lows, captures most of the gains.