Striking workers of Tata Motors held a protest dharna in front of the Chharodi railway station  opposite the entry road to Tata Motors Sanand factory.

However, the event turned out to be a muted affair with only 300 protestors indulging in sloganeering. As per the sources, about 90 workers have broken away from the group over the past few days and joined work.

It is learnt that about 100 to 150 police officials were present at the Sanand-Viramgam highway since morning. A handful of trade union leaders were also waiting nearby. About 100 odd workers came in around 11:30 am and congregated at the Chharodi railway station right off the highway.

Some sloganeering and a couple of speeches later (during which the police waited patiently and was seen urging the workers to wind up the process), the workers, whose numbers by the time had swelled to around 300, were asked to board the police vans and were taken away. The protesting Workers did not have permission to hold the protest at Sanand.  To the police and administration's relief protesting Workers on their part did not try to disrupt the traffic on the highway. 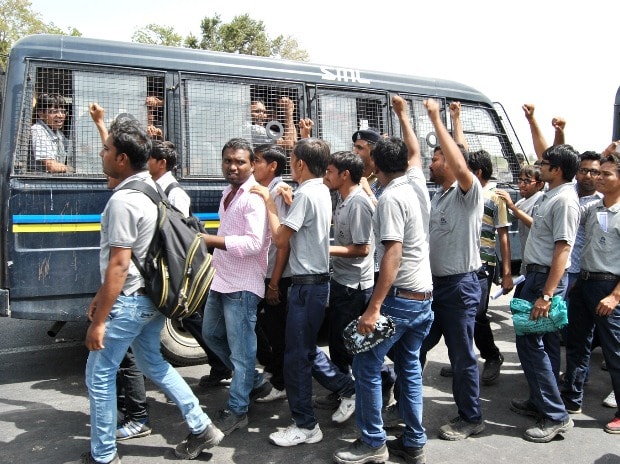 Sources close to the development said, "Workers are now more open to resume work, just that the demand for taking back those suspended has to be met. Around 90 workers, however, have already joined back during the past few weeks."

Sagar Rabari, secretary Gujarat Khedut Samaj that has pledged support to the Tata workers along with 22 other trade unions, said, "Farmers were not involved in today's action. We did not get police permission, and hence we did not wish to scale up the event."

Farmers movement leader Lalji Desai whose Jameen Adhikar Andolan Gujarat (JAAG) had mobilised farmers from 44 villages against the proposed Mandal Special  Investment Region (SIR), was present in Sanand today. He, however, added that some farmer leaders were present in today's movement, though not farmers themselves in large numbers.

Workers feel that holding such protests would build the pressure against the company as well as the state government and are hopeful that they would soon yield to the workers' demands. Rabari said, "We have maintained from the very beginning that the demand of re-instating the 28 suspended workers is non-negotiable. However, it now seems that there could be a positive outcome soon." He, however, added that another protest dharna is planned in front of the deputy collector's office on March 28, for which they plan to mobilise the farmers as well.