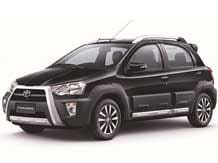 With an unresolved labour crisis at its factory near Bangalore, Toyota seems to delaying a  launch earlier scheduled for next month and considered important. The company, though, denies such a decision.

Toyota Kirloskar Motors, the Indian subsidiary of the Japanese company and preparing for the launch of the Etios Cross, a sub-four metre crossover vehicle, is being forced to run its two plants at much lesser levels than planned before the launch.

The Cross, showcased at the India Auto Expo earlier this year, is supposed to be the volume model for Toyota, as it will be priced in the same league as the Etios and Liva, its sedan and hatchback.

However, as striking workers put delivery pressure on Toyota, industry watchers say the company will not be able to raise supplies of the model on time, as it has to also honour bookings for other models. So, according to dealers in Bangalore, the company has postponed the launch of the Etios Cross indefinitely. BUMPER Only 300 of the 4,500 unionised Grade-8 workers have returned to work by signing the good conduct undertaking Average daily production has halved from about 700 vehicles before the lockout to less than 350 vehicles Company continuing production with the help of management staff, engineers, contract workers and apprentices Launches: the Etios Cross and the new Corolla Altis

It had earlier told dealers it would dispatch display vehicles on April 4 but they are making do with only pictures of the car.

A Mumbai-based dealer said though the launch is in May, the company is yet to commit on delivery dates.

The Etios Cross is a stylish offshoot of the Etios Liva, which comes with a body kit that makes its exterior look rugged, like that of an offroader. The vehicle is a crossover between a sports utility vehicle and a hatchback. The expected price of the vehicle, whose bookings started in February, could be in Rs 5-6 lakh.

No change in schedule, says Toyota
While the company refused to share booking figures of the Cross, it stated: “There is no change in the launch date of the model and it will happen in May.”

A company spokesperson also declined to specify the current utilisation levels of the two manufacturing units.

It is continuing to produce with the help of management staff, engineers, contract workers and apprentices. Till now, only 300 of the 4,500 unionised Grade-8 employees have returned to work by signing the good conduct undertaking the company is insisting on. Average daily production has dipped from about 700 prior to the lockout to below 350.

The normal high-pitch publicity campaigns associated with new model launches is also missing with the Etios Cross. “We have seen only the photograph of the model and are showing this to our customers, who are very keen on booking the model and are ready to wait for six months,” said a senior sales executive at a dealership in Bangalore.

Toyota’s hopes are on the Cross because of a lacklustre sales performance last year. In the 11 months ended February of the 2013-14 financial year, it posted a drop of 17 per cent in sales, far higher than the six per cent average drop in the industry. Along with the Cross, the company is also scheduled to launch the new Corolla Altis.