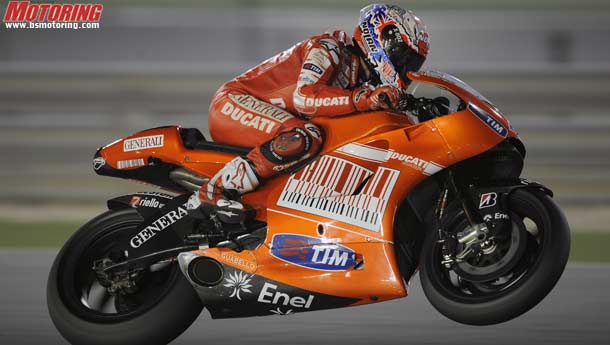 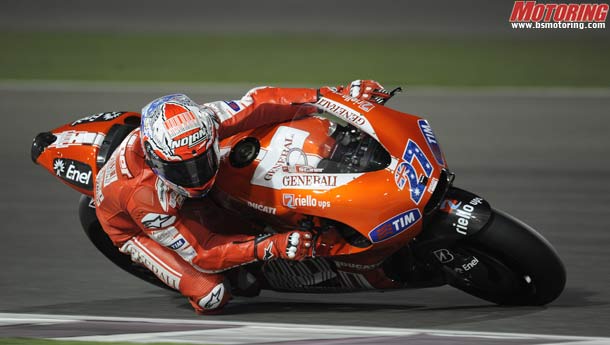 Ducati's Casey Stoner has denied Valentino Rossi a complete sweep of pre-season testing. Rossi, who was fastest at the four days at Sepang earlier in the year and also on the first of two days at Qatar, looked set to dominate the last day as well, before Stoner dipped below Rossi's time by a mere 0.049 seconds. Andrea Dovizioso took third place for Repsol Honda after sixth on the first day, improving his time by 0.932 seconds. His team mate Dani Pedrosa suffered a not-so-encouraging test and finished in 13th place, over 1.5 seconds behind Stoner. The disparate times might be due to Pedrosa testing new parts, but we hope he's up to speed for race weekend.

Behind Dovizioso, it was super rookie Ben Spies who led the satellite-team attack on the factory teams. Spies was one of the many riders, including team mate Colin Edwards who finished ninth, who fell at turn two, the left-hander getting the better of riders like Stoner and Nicky Hayden as well. Fifth spot went to Hayden, who improved his first-day time by 0.74 seconds, to leap up the order. He seems to be getting the hang of the Ducati and looks set to challenge for more podium spots in 2010. Suzuki's Loris Capirossi was another big gainer on the second day as he went quicker by 0.904 seconds to claim sixth spot, while his team mate Alvaro Bautista could only manage 12th.

Then it was Rossi's team mate Jorge Lorenzo in seventh place, the Spaniard getting to grips with the M1 nursing a recuperating right hand after a fracture sustained after a motocross accident during off-season. Lorenzo was the only M1 rider to lap quicker on the second night, with the other Yamaha riders having posted their best times the previous night. Randy de Puniet, who was the fastest Honda rider on day one, was eighth fastest and the second Honda rider in the concluding session. Pramac Racing's Mika Kallio and Aleix Espargaro occupied 10th and 11th, while Marco Melandri, Hector Barbera, Hiroshi Aoyama, and Marco Simoncelli finished 14th, 15th, 16th and 17th respectively.

The opening race weekend of the 2010 MotoGP season will be held from the 9th to the 11th of April at Qatar. Things have hotted up suitably during pre-season and we can't wait for the action to begin!