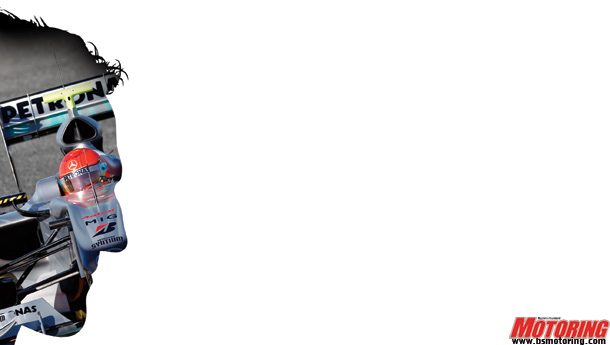 Landmark has got a book sale going on till the 3rd of October. The reason I'm telling you this is because a) it's a pretty useful thing to know, and b) it's been on my mind because Rohin's just gone and spent most of his salary over there. He came back to work looking rather pleased with himself, despite the fact that he's now got a spasm in his back from having hauled around sacks full of books. The good thing for the rest of us at work was that he hadn't just bought books for himself. He'd merrily stuffed into his shopping cart books he thought we'd like as well and doled them out at the office like Santa. Clearly I'd been nice enough, because I got a copy of Motorsport magazine. The April 2010 issue to be precise. The cover has on it a photograph of Michael Schumacher. 'Return of the king'. 'The true story behind the comeback of the century'. 'He couldn't say no'. All lines printed on the cover of the magazine, and all lines that make me think back to the March 2010 issue of BSM. That's when we'd got our Schumi cover story, and I can't help feel a little chuffed about the fact that our issue came out a full month before theirs did. Which leads me to the following story.

Now look, I've grown up watching Michael Schumacher race. As a little pigtailed young 'un I watched him take some smashing good victories, I watched him pull some downright rotten manoeuvres on track and I watched as he in part tranfixed and in part bored audiences across the world. I belonged to the former category, watching races spellbound, defending him tooth and nail in front of snarky anti-Schuey elements, despite knowing deep down that he mightn't have done the right thing. I knew Michael trivia galore, and envied people who got to spend time with the Regenmeister. One such person was of course Sabine Kehm. Michael Schumacher's PR Manager and friend. Little did I know I'd be hounding her for an interview with the man himself one day.

December 2009. Bijoy comes into the office and declares that we must have a Michael Schumacher cover story with an interview to go with it.

January 2010. The wonderful people at Mercedes-Benz India put us onto their German counterparts, who manage to get hold of Sabine Kehm's email address and telephone number for us. The first round of emails is sent out. At the same time we send out an email to Nicola Armstrong who is in charge of PR for Mercedes GP. No response. We send the February issue of the magazine to press. I'm starting to get worried as work on the March issue kicks off. I finally place a telephone call to Nicola and since she doesn't answer, I leave her a fairly long message, the jist of which is that we really want this interview with Michael and it means everything to us as we've all, ahem, grown up dreaming of this. The next morning there's an email from Nicola apologising for the delay in responding, and stating that the only interview possibility with Michael will have to be via email.

February 2010. I dash off an email to both Nicola and Sabine with 10 questions I've always wanted to ask Michael. I wait. A week goes by. No response. I call Nicola Armstrong again, I can never seem to get through on Sabine's phone. I leave her a message again saying I've sent the questions across and can she please remind Sabine about them. A couple of days later, Sabine replies saying that she is afraid she will have to limit my questions to just four. Goddammit! But, I'll take it of course. Out go all the questions I've always wanted to ask Schumi. Now I have to stick to four that are just concerned with his comeback. I send them off. No response.

We go to press in four days.
I'm having trouble focussing on anything other than the interview.

We go to press in three days.
I've developed a nervous tic.

We go to press in two days.
I wake up in a cold sweat in the middle of the night.

We go to press one day.
My vision is blurry.

We go to press.
I'm having trouble breathing, but there's a little hope yet, we're holding the cover story back. Maybe the interview will come through after all. Nicola Armstrong gets another long message. I tell her the truth. The entire magazine's done, including the cover, which already has the line 'Exclusive interview with the legend himself' on it. But for that to be true, and so that we don't have a rather large blank space in our cover story, which is already laid out, can she please, please remind Sabine about the interview.

We've run out of time. For some strange reason I'm in the office by 9am. I check my email at around 9.30. There it is. THE interview.

I send Nicola and Sabine copies of the story, thanking them profusely. Nicola replies saying she's glad she could help.

Four little questions, but the answers to those came from Michael Schumacher himself. That pig tailed young 'un manages to cross one thing of her list.