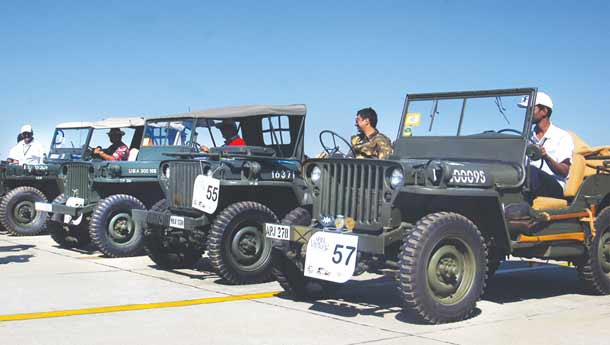 Perhaps you already know that I own a 1960 Volkswagen Beetle, the love of my life, my first wife, my pet, my everything. I take her out every couple of days, early in the morning when traffic is light. I drive her gently over Mumbai’s perpetually dug-up potholed streets, never rev her needlessly high and generally keep away from other denizens of the road. The rare moment when I get a clean stretch, I let go and enjoy the way this car has to be driven. Um, actually you don’t exactly set the road on fire in a Beetle, but still, you do want to hear the engine note go raucous and wild. It’s a delicious sensation, pushing an ancient classic with reluctant brakes and unpredictable dynamics – if ever I have to stomp on the brake pedal in a hurry, trust me, my Bug will execute a U-turn on a 50 paise coin.

So there always was this yearning in me to push a vintage or classic machine in a safe environment... yes, you could say that there was something missing in the romance between my Beetle and me. Thankfully, something happened in January, an unparalleled event in vintage/classic car circles, where people like me got an opportunity to drive some elderly machines like they have never been done before in decades. Yup, it was a proper race between these old fogies, held at a real Indian Air Force air base with vast run-off areas and some really wild action. Ladies and gentlemen, I participated in the Spice Vintage Wheels – a proper race for ancient automobiles held at the Yelahanka Air Base on the outskirts of Bangalore on a January Sunday, organised by the Karnataka Vintage & Classic Car Club. I couldn’t believe the way the owners of precious machinery would go out and really flog the wheels off them... but it happened and it was awesome.
Why the race was significant was because officially organised classic and vintage car events in India usually constitute a timed rally on city streets, and you’re really not required to push your car. It’s fun, but it’s really not fun, know what I mean? Here, the cars were not only paraded on Bangalore roads (thank you, Bangaloreans, you waited at traffic lights patiently while we crawled our way through), but also whipped on a specially laid out 1.25 km loop at the air base (yes, we looped the loop in an automotive sense).
So what were the cars there? The usual assortment of British and American iron, with a few Germans and Italians thrown in. So you had various models from Morris, Austin, Ford, Chevrolet, Dodge, DeSoto, Jaguar, Mercedes-Benz, Fiat... oh, there was a Citroen 2CV too. And thankfully, no sisters of my VW to keep an eye on me. There were Ford Jeeps and plenty of British motorcycles too.

Dr Ravi Prakash, who had the maximum number of entries at the event, lent me his 1956 Austin Healey 100/6 – if you remember, we had featured this gorgeous machine in the December 2005 issue of Business Standard Motoring. Maybe it was me (ahem), maybe it was the machine, but somehow, three pretty teenage girls materialised inside my car and decided to accompany me all the way to Yelahanka from MG Road in Bangalore. The only thing missing was a pen that would transform into a bomb, then I could have introduced myself as Krishnan, Srinivas Krishnan.

For those who have missed the article in the magazine, the Austin Healey is one of the most beautiful cars ever made and its 3000cc straight-six powers the rear wheels. But the issue is that this immensely attractive car had to fight for attention, as my three teenage passengers were waving like celebrities to every person on the road, including the cops and shopkeepers. But the Healey would stop suddenly right in the middle of traffic and the girls had to push it to start it again – it was jealous and was taking revenge, I guess.

We eventually reached the air base, and security was pretty tight. But the Healey was so low slung that those mirrors mounted on wheels which are used to check the underbody of cars couldn’t even squeeze through! All the cars were parked inside the racing track and it was quite a sight to behold. A massive-huge-humongous concrete/tarmac field with Avro HS-748s forming a backdrop and various colours of automotive metal glittering in the sun.

The race started in earnest, with ace rallyist Jagat Nanjappa in charge of time-keeping. Cars lined up according to their cubic capacity category and were flagged off. Owners and drivers were fearlessly giving their machines the stick. Though the cars were not too fast, they were moving at speeds they were capable of. Engines were singing, exhaust pipes were smoking, rubber was burning, but other than an incident with a flying hubcab and two bumpers barely kissing, the cars returned with all their parts intact. There was wild cornering, much cheering, and sometimes doors flying, but it was unadulterated fun. Though the Morris Minors were quite nimble, the huge American barges – massive cubic capacity and brick-like dynamics rolled into one – were a sight to behold. I felt that the monstrous open tourers like the 1928 Lanchester Straight 8, the 1934 Mercedes-Benz 320 and the 1930 Delage 8 were being driven the way they were for the first time. And they moved. The British motorcycles couldn’t stick to the racing line and they were going really wide, but their throbbing engines could match fighter planes note for note.

Soon it was time for me to race. The Healey would have been the one to beat at the race in its category at Yelahanka. It had a brilliant competition record, having won at the 1957 Mille Miglia, while three factory machines won the 1958 12-hour race at Sebring. Besides, its 117 bhp motor wasn’t a shrinking violet either. Or so I thought. That’s because old machines can be cranky. And this baby needed some attention under the long bonnet. We were flagged off, and the Austin Healey simply refused to move – a blown gasket was one of the reasons. I had to watch the rear ends of my competitors disappear and after a disappointingly long time, I eventually chugged to the finish line. Still, there was much cheering around. Maybe it was me after all.

I would get an opportunity again. This time it was in a 1947 MG TC in the open category, again belonging to Dr Prakash. Now this anachronistic pre-WWII carryover was known for its tenacious roadholding and spirited performance. Well, in those days at least. In the 21st century, I had to wrestle with the wheels, had to keep correcting over every single millimetre it covered. It was going anywhere but straight. Though the race was not timed, I followed a 1937 Sunbeam Talbot to second place. So there.

The fastest car that day – which to me was obvious even before the event began – was the sublime 1961 Jaguar E-Type (yes, Dr Prakash’s again). It did the 1.25 km lap in 47 seconds and the way it moved was simply stunning (read about it in the February issue of Business Standard Motoring?).

At the end of the day, almost everybody, including an undeserving me, walked away with trophies. I don’t know if I have as much courage as the members of the KVCCC who bravely pushed their own loved ones. But seeing them, I am quite convinced I want to race my beloved Beetle too. Wonder which air base is closest to Mumbai.BSM