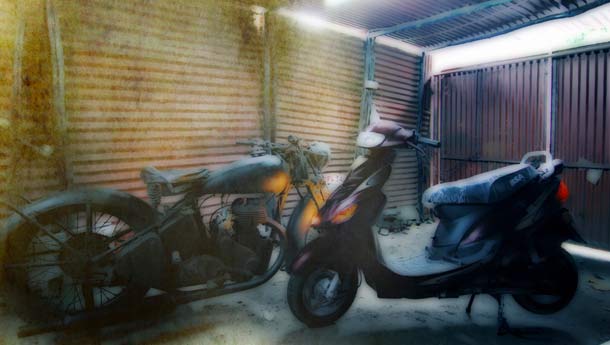 I met an avid motorcyclist on a recent ride, a ride that you will soon read about in the forthcoming April issue of the magazine. Much older than me, and been there and done almost everything in that list of two-wheeled must-do's of mine that I've yet to start ticking off, the bloke was an American who had lived a substantial chunk of his years in Asia. Me, well, I've been to the US once for about a month, and that was a long, long time ago.

As you might have guessed, I was nothing like him, and him, nothing like me. Yet, we connected on a plane that was much higher than mere culture and linguistics and experiences. We connected on motorcycles and that now-fading passion for fettling them.

We both agreed that the current lot of motorcycles are light years ahead in terms of reliability and performance than the machines a couple of decades ago. Yet, we nodded in agreement with neither a smile nor a glint of joy.

What distinguishes motorcycles from cars could be tabulated into a dissertation of monumental proportions. But the most obvious one is that of man blending into machine. Motorcycles make you a part of them, instead of merely enveloping you in a cocoon of steel and glass, and nowadays, plastic and carbon fibre.

Sadly, to most, motorcycles have become mere appliances - objects to serve a rather staid purpose of transportation. Bikes these days can go many thousands of kilometers without an oil change and some people actually ride through the life-cycles of their motorcycles without ever realising that there are valve clearances to be adjusted and combustion chambers to be de-carbonised. Yet these motorcycles run faithfully, starting every morning and sipping fuel through the day.

The displeasure, not only mine but my new American friend's as well, was that not too many people are intimate with their machines anymore. The current crop of two-wheelers do not demand any hands-on attention from their riders. And to many, working with their own hands on their motorcycles is limited to dusting the things down every morning and dialing the number of the mechanic in the rare eventuality of a breakdown.

But spannering on a motorcycle and bringing it back to life is a joy that cannot be described in words. Those of you who have experienced it know what I'm talking about. Working on your motorcycle on a Saturday night, with music, a cup of tea and your mate as company will relax you like no bloody party would.

You don't need a Laverda Jota or a Crocker or any such exquisite machinery to revel in the joy that is to be had by wielding a spanner. That old scooter that's lying down in your uncle's yard would suffice. Or maybe you could convince that young lad who's left his RX 100 for dead to hand it over to you for a few thousand quid.

Go on and take the plunge. Skin your knuckles (or sometimes, break your teeth), rip the threads off studs and snap that last bolt of the engine rebuild into two, with the larger part firmly screwed into the crankcase. It's going to be challenging and quite a few times you're bound to feel like pulling your hair out. But the high of starting up that bike that you've rebuilt with your own two hands for the first time will be worth all the effort put in a thousand fold. And it increases with every kilometer you put in. Trust me!