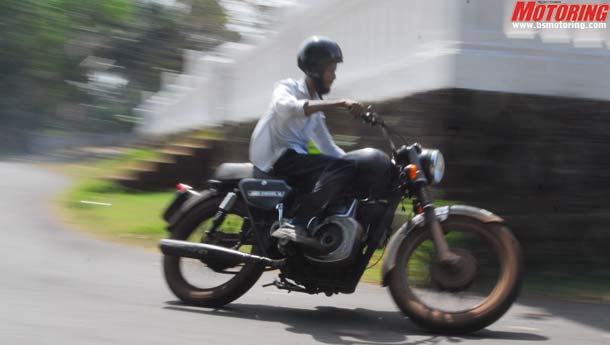 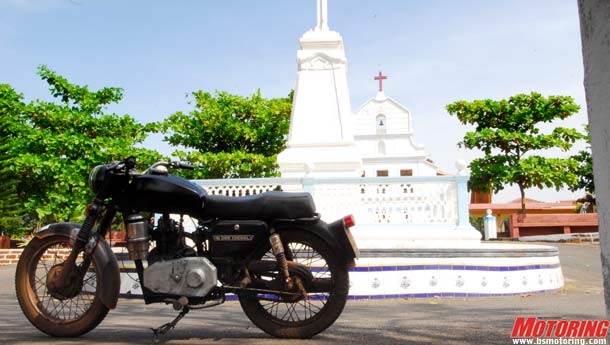 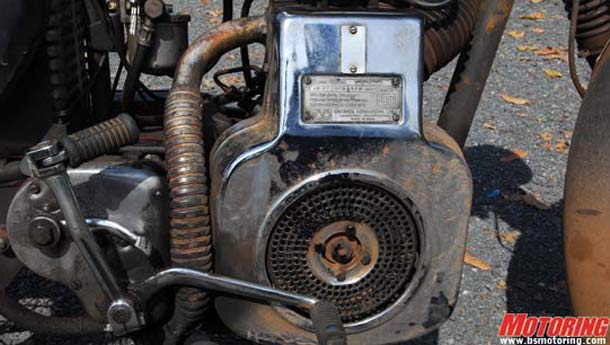 We Indians are cheap and trust me, I mean that as a compliment. Pushing a rupee as far as it can possibly go is sensible and a good thing, especially in these trying times.  And in that pursuit, it can demand impressive quantities of ingenuity.

This motorcycle was built to be so cheap to run that it made walking look like an activity solely reserved for nobility. This bike, dear readers, is the Sooraj diesel.

You don’t see many of these any more, and they’re rarer than hen’s teeth in urban India. Old men, with their grandchildren on their laps, speak in hushed tones of this motorcycle. Mothers shovel food down their kids’ mouths, threatening the visit of this beast into the household if the little ones don’t swallow their food quickly. Tales of shattered femurs make youngsters grimace and stories of how unsuspecting men have had their arms dislocated by the vibration from the engine cause teenagers to tremble and break out in a cold sweat.

But just like eating freshly boiled cucumber cannot give you leprosy, no matter what that ‘wise’ neighbourhood elder might say, there are myths surrounding the Sooraj diesel motorcycle that are as accurate as a government report. So without much ado, I shall go on to bust a few of these old wives’ tales.

MYTH 1: The Sooraj is merely a rebadged Royal Enfield Bullet with a diesel motor plonked in.

MYTH BUSTED: This is as far from the truth as you can possibly get. Sure, many people chucked the petrol engines out of their Bullets and shoehorned a Greaves diesel in there but the Sooraj was designed around the heavy oil burning motor right at the onset. The frame is totally different and unlike the Enfield, the gearbox (albeit an Enfield Albion 4-speeder) sits separately from the engine, unlike in the Bullet where it is bolted to the powerplant. Yes, the forks come from the Enfield and so do the wheels but this is a totally different motorcycle in the whole scheme of things.

MYTH 2: The Sooraj diesel generates so much torque that it can pull entire paddy fields away.

MYTH BUSTED: Hardly. With its 1.6 kgm of torque, it could pull off a bit of paddy from the field but that’s about it. What it does do, however, is develop all its torque at exceptionally low rpm. Yes, on a perfectly level road, you and a pillion could roll off in top gear from standstill with some clutch work involved. Making off with an expanse of farmland behind you is just plain hogwash.

MYTH 3: Kick-starting the Sooraj is a feat that involves praying to the Gods to bestow you with the limbs of Hanuman himself.

MYTH BUSTED: Actually, the Sooraj was sold with an electric starter (making it one of the first bikes in the country to have such a system) and so on a good day with a fully charged battery, all it takes to bring the diesel to life is the touch of a button. Well, the day I rode it, it wasn’t a good day and so naturally the battery wasn’t in the pink of health. However, it started every time I kicked it and it didn’t expect me to be built like the Monkey God. Sure, the compression developed by the Greaves Lombardini engine is immense (18:1) but there’s the valve lifter to help you overcome all of that resistance. To start the bike without the use of the electric starter, all you do is lift the valve-lifter (that pops the exhaust valve open), kick the lever down slowly till you hear a click that tells you the valve lifter has returned to its original position and then you let the kick-starter return to its origin. After that, you shove the lever all the way down with your foot with full follow through. That’s all it takes and what’s more, the lever is lighter to kick than even an RX100!

MYTH 4: The Sooraj will vibrate your arms out of their sockets even when ridden at 30 kph.

MYTH BUSTED: The bloke who coined this one probably had a vivid sense of imagination paired with a touch of exaggeration. Either that or he rode a specimen that was worse for the wear. At idle, the bike does shiver slightly with the vibes, but once on the go, they tend to disappear till about the time you’re pushing the engine too hard for its own good (which is somewhere near its 70 kph top whack). At about 40-50 kph, which happens to be the Sooraj’s sweet spot, the motorcycle is almost on par with an old Royal Enfield Bullet.

MYTH 5: Riding the Sooraj needs the strength of an ox, the reflexes of a snake and the patience of a vulture.

MYTH BUSTED: I’m willing to bet that the guy who came up with this one spent too much time in a zoo. Ashburn Pereira, the proud owner of this Sooraj, has been happily riding his motorcycle for the past two years. And when you look at him, it becomes clear that the Sooraj can easily be ridden by almost anyone. And by anyone, I mean someone human.

What must be kept in mind, though, is that the Sooraj’s DI 325cc motor puts out a meagre 6.5 bhp at 3600 rpm with 1.6 kgm of torque. And with its near 200 kg weight to lug around, the Sooraj is a relatively slow accelerating motorcycle but once it builds steam, it’s easy to hold its 50 kph cruising speed with the occasional flick of its throttle. When you’re overtaking on the highway, however, you really need to plan out the manoeuvre more accurately than you would on any other motorcycle.

MYTH 6: The Sooraj can circumnavigate the globe on one tablespoon of diesel.

MYTH BUSTED: Okay, I must admit that statement is a tad too much. But the Sooraj does return that ridiculous 86 kilometres to a litre of diesel. So that works out to roughly 50 paise per kilometre. With engine spares priced relatively cheap and freely available (probably because even your local sugarcane juice guy uses the same motor), the Sooraj truly is one of the most economical motorcycles to own and ride.

Ashburn Pereira is very happy with his motorcycle and it hasn’t left him stranded ever in all the years he has owned it. Yes, the Sooraj does seem built to a price, especially when it comes to the quality of the aluminium parts, but it does its job and demands little or no wages. This is a motorcycle from an era when family life was dictated by a monthly budget and when credit cards rarely lined wallets. It was simpler then and ironically although the anti-pollution norms weren’t as stringent, the air was far cleaner and the land was greener. Yes, the Sooraj is a fossil now, but it demands utmost respect because it wasn’t just a poor man’s steed. It was built for the sensible man – a type that is lacking today.