Sonata vs Accord vs Superb - Back benchers 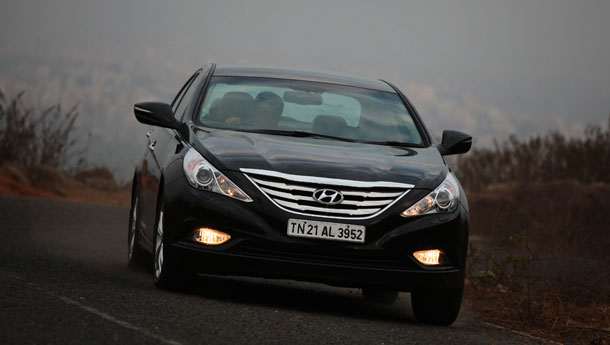 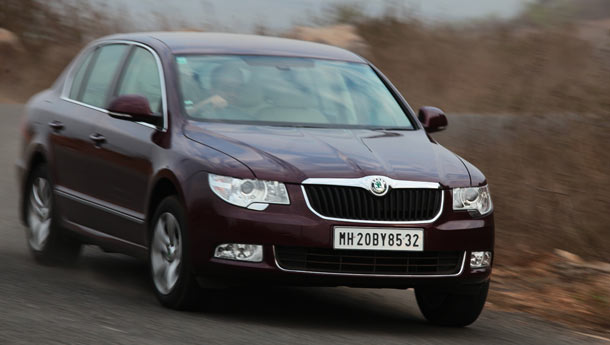 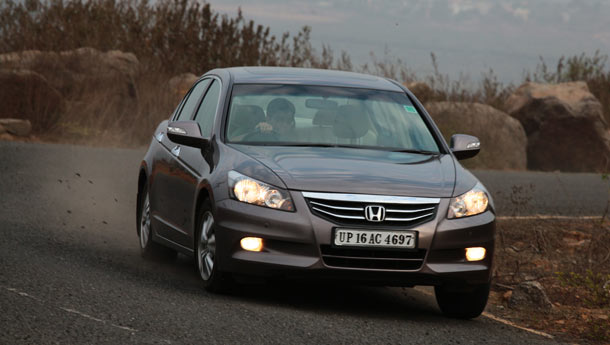 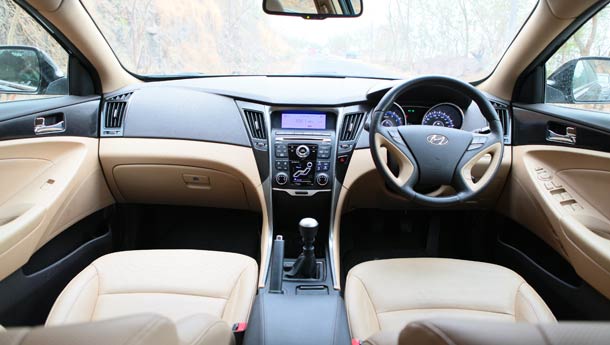 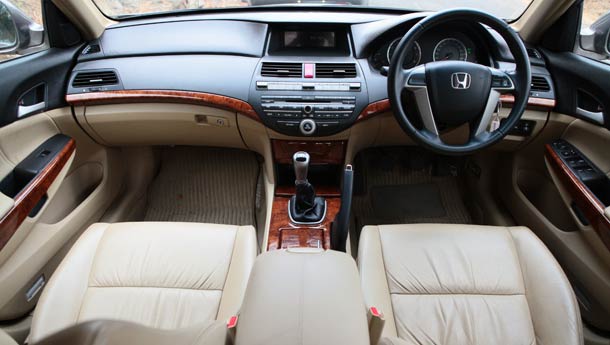 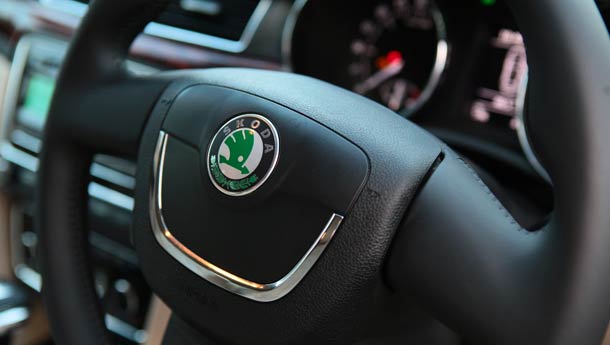 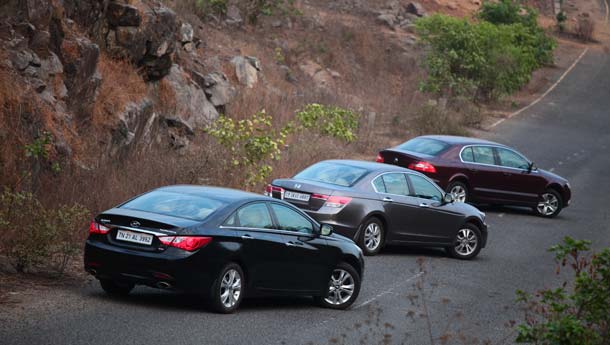 Hyundai has a very different spiel for justifying the lack of seat coolers for the driver in their new Sonata manual version. They say that most people who buy manuals use it as a chauffeur driven car and therefore, the chauffeur doesn’t need to be comfortable, but the fat cat in the rear seat does. Therefore you have to spend a princely Rs 2 lakh, ex-showroom more before you can cool your bum and enjoy the ride (read, an automatic).

Strange may be the ways of the sales and marketing men at India’s second-largest car maker. So what better than to put their car to the test where it matters most: the back seat. But, we at BSM are all about the joy of driving and so we decided, after spending just a few minutes in the back seat, to spend the rest of the day at the helm. Just as we were starting to enjoy the new Sonata, the rear view mirrors were filled by two equally large cars. The Skoda Superb on the portside is the current bestseller in its segment, while the Accord on the starboard is a global benchmark. Surely, the Sonata couldn’t have thought this to be a cakewalk now, could it?

Okay, so Nick Hall will tell you what those beauties look like (page 78) but honestly, none of these cars are bad lookers, speaking to the executive sensibilities of India’s corporate upper cut. The Accord and Superb have been around for what feels like eons now, so they have their own fair share of staunch supporters and detractors and you can choose your camps as you please. As for the Sonata, well, it will catch your attention, no doubt. Placed next to the two, it certainly does make the Accord feel a bit placid, though the unconventionality of the Superb’s design does hold its own strong points. The nose of the Sonata is quite distinctive, unlike the Embera that was, well, too non-descript. Large headlamps and a slightly ‘baleen whale’ like jaw does make it stand out. There are tubs of chrome all around, the rising waistline is now a ‘fluidic’ trademark and it’s at the rear three-quarters that the car looks its best. Attention grabber it surely is, pretty, er... maybe not.

Executives are also quite fussy about what constitutes essential details. The Accord, for instance, has a sunroof, front parking sensors and cruise control, none of which are present on the other two cars. Okay, so we got along a Superb in the Ambition trim that doesn’t offer these features, but they aren’t critical enough to sway people’s decisions. As for the Sonata, hats off to the blokes at Hyundai. They’ve loaded it to the gills and then some more. Okay, so you get seat coolers and audio controls at the rear, still you get electric seats up front, a well specced out audio unit and what not. What you might miss is a more detailed trip meter that can be found on even the Verna and probably an audio display unit that is a little less blue. You can’t miss the Volvo-esque automatic climate control and the general high levels of fit and finish. Some plastic controls continue to stay iffy and the location of the button for the fuel-filler lid is an ergonomic mess, though these are small niggles in the package. I would have liked to see a smaller steering wheel too, but more on that later.

The Superb in the new Ambition trim makes some concessions. Gone are the touchscreen audio unit and the audio controls on the steering wheel, and instead you make do with a single CD changer and a button-festooned audio unit. Yet, the overall fit and finish is easily a step ahead of the competition. You still get memory seat function for the driver’s side and the logical multi-trip meter. Skoda has had to make some more concessions by offering halogen lamps instead of xenons and these aren’t as powerful as one would have hoped.

Honda did try to spice up the interiors last year by offering some more kit with the minor facelift of the Accord. The addition of stability control is a clear plus point. However, some gripes, like the overdone centre console, with its large number of buttons, isn’t a match winner. What makes the Accord stand out is that everything is driver-centric.

Instrumentation is clear and the overall build quality and finish is decent, yet it doesn’t feel as plush the other two.

THE BEST SEAT IN THE HOUSE

Aah, since I did mention this was also a test of the back seat, we spent quality time trying to deduce which one was the best. The Skoda, by far, has the most amount of leg room and knee room. The seat squab is a little narrow which does reduce a bit of under thigh support, but the general ingress and egress as well as overall back support is the best here.

The Sonata runs it very, very close. The seat is more sofa-like and offers good support and the leg room isn’t bad either. We wish it had a wee bit more head room (what with its coupé-like roofline) and just a bit more under thigh support. Having the only seat coolers in the business is also a plus.

The Accord has a low-ish hip point that can be a bit bothersome, but has tremendous amounts of head room, leg room and knee room with rather decent under thigh support. But it’s the driver seat that is the best of the cars here. It is more focussed, offers a bit more side bolstering and inspires quite a bit of confidence. The Superb runs it a close second, had it not been for its slightly poorer bolstering. The Sonata runs dead last. It’s difficult to find an optimum driving position even after adjusting the steering and seat height. The large-ish steering wheel doesn’t help it climb up the charts either.

Give 20 or take 20. Strange, but that’s about as much that separates the three, a sum of 20 bhp. Smack bang in the centre of it is the Accord at 180 bhp, a figure that isn’t bad for a 2.4-litre, i-VTEC equipped four-pot petrol motor. On the far end is the new Sonata, threatening to crack 200 bhp and a wallop of torque from its – you guessed it right – 2.4-litre variable valvetrain engine. And then, there’s the Superb, just nudging 160 bhp from its rather small 1.8-litre turbo petrol four-cylinder engine. You might think that the one with the maximum bang is the one that will leave the other two in its wake. Prepare to be surprised.

The Superb may have only 1781cc, but it packs a punch way above its weight. Think of it as a middleweight boxer in a tournament of heavyweight boxers and you can understand why this one gets special mention. It lacks the initial go off the line that the Sonata seems to have, thanks to its lack of turbochargers and a more linear power delivery. But come 1500 rpm and the Superb leaves the Sonata a spot behind. Once the turbo spools in, there’s no looking back for the Sonata. The dash to 60 comes up in just 4.07 seconds, the Sonata a bit behind at 4.2 seconds and the Accord even further off at 5.03 seconds. Nudge the triple digit barrier and the Superb clearly gains a lead on the other two, the Accord now struggling to keep up. Top speeds are academic, but all three can nudge 200 kph if you please. The presence of a turbocharger also means that the Superb is better at overtaking, as long as you can keep the engine on the boil. Be in the wrong gear and the car will take a fraction too long to close the gap.

So, as far as numbers go, the Superb proves its mettle. But the Sonata is not a distant second. If your chauffeur turns up sick and driver duties fall on your lap, here’s what you will find. As I mentioned earlier, the Sonata is better off the block, but the heavy clutch will leave you more than just fuming and fretting. The quick action of the Superb’s clutch isn’t bad, but it’s the Accord’s leftmost pedal that will leave you smiling. The gearbox too is rather slick and a joy to use, despite it being one gear short on the other two. The Superb has decent gearbox throw too, while the Sonata’s, though not bad individually, could do with a slightly shorter throw. Unfortunately, the Accord’s motor needs to be revved quite a bit in the city and that can be a bit frustrating, especially in stop-go traffic.

TO DRIVE OR BE DRIVEN?

The Embera wasn’t a bad handler, but the steering never felt too responsive and was too soft to handle Indian road conditions. Clearly, the new Sonata has that covered. Gone is some of the rolling tendency and in comes a more flat driving experience. Over a wide variety of terrain, from bumpy tarmac to potholes to flat stretches, the Sonata is a more mature rider. There is a slight level of stiffness to the proceedings, something that should have been there in the last car as well.

It handles decently too, albeit with some understeer and some body roll to accompany it. What takes away from the pleasure of driving it is the large steering wheel that you tend to hang on to and that detracts from the driving experience.

Honda has always followed a stiffer suspension set up up front and a softer set up for the rear and that holds true for the Accord as well. It feels well planted with lots of grip up front and the steering wheel does provide quite some feedback. But the rear tends to follow in later and that upsets the overall balance. There’s some understeer here too but the ride borders on the plusher side.

It’s the Superb though that has brilliant dynamics. Agreed that there’s a smattering of torque steer and a slightly firm low speed ride, but go beyond that and the Superb’s combination of very good medium to high speed ride, excellent high speed stability and grip, and a responsive steering makes you wonder sometimes if this is indeed a front-wheel drive car or not. Whether petrol or diesel, it still remains the class benchmark in this area.

If you care a lot about peace-of-mind factor, then the Accord is what you should be driving home in. It’s such a phenomenon that few will doubt its antecedents. It does most things reasonably well, but remember, it didn’t move much further up the scales like its predecessor did. And the competition has pretty much blown past it. So it can’t do better than third.

The Sonata is a mighty step forward for the Korean chaebol and if this is the sign of things to come, then their plans of world domination clearly seem to be on the way. Well loaded, sweetly priced and with a decent motor and dynamics to boot, the Sonata is treading a much better path. However, it still isn’t where it should be, lacking some finishing touches and a better engineering mind at hand. If it does close that gap, expect the Europeans to feel the pressure.

Until then, the Superb is clearly our favourite. Whether you choose the cheaper Ambition or the more loaded Elegance trim, the Superb is more than just about kit. It’s a well-engineered car with an impressive ride and handling set up, good build quality and an engine that may well be among the best sold in the country. Shame that Skoda has still some way to go in providing a better after-sales experience, but apart from that, the Superb is still the car to buy. So what if it doesn’t have seat coolers?