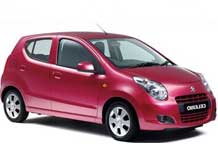 The country's largest car maker, Maruti Suzuki India Limited (MSIL), is gearing up for the global premiere of its recently developed automatic transmission system in the new compact car, Celerio, at the Auto Expo that opens on Wednesday. The product has been designed and developed to tap into the growing consumers' demand for vehicles with auto gear shift. The company also aims to consolidate its presence in the compact car category with the model.

Says Mayank Pareekh, chief operating officer (marketing & sales), MSIL: "We have seen in models like the A-Star that 25-30 per cent of the enquiries would come in for the automatic transmission variants. However, conversion rates would be low and sales of the version would remain limited to around five-six per cent of overall numbers." This consumer preference patterns seen in models such as Zen, A-Star, Ritz and SX4 hinted at a potential demand for automatic transmission cars and prompted MSIL to address key customer concerns, which largely deterred the purchase of such cars.

Research showed there were largely three areas that required attention while developing an AT variant - high cost of acquisition, low fuel economy and maintenance hassles. "We thought if we could address these issues, we will be addressing a good segment of consumers who are looking for automatic transmission in the mass segment. With Celerio, which has been developed at an investment of around Rs 570 crore, having auto gear shift (AGS) EZ Drive technology, we have resolved those issues," adds Pareek. The Celerio will be pitched against the likes of Hyundai's Grandi10 and Honda's Brio, whose automatic versions are priced at Rs 6.04 lakh and Rs 6.19 lakh, respectively (ex-showroom, Delhi).

The EZ Drive technology, which MSIL claims, is being introduced for the first time in a passenger car in India, allows the driver to use automatic or manual shift patterns at the gear lever but without the physical input for the clutch. The technology, which Suzuki Motor Corporation took three years to develop, effectively automates the clutching mechanism while leaving the gear shifting mechanism to the driver, the first time such a technology would be deployed in a small car. The Celerio will be offered in six petrol variants - four with manual transmission and two with Auto Gear Shift (AGS) options. Celerio Auto Gear Shift variants will have the flexibility of both manual mode and auto drive mode in the same car, with a simple shift of gear lever.

According to MSIL, the Celerio will offer a fuel efficiency of 23.1 km a litre, on a par with manual transmission variants. The Celerio sports several features like alloy- wheels and blue-tooth connectivity across variants. The car is equipped with a 1 litre K-next engine, to be available in seven colours. Pareekh says, "Usually the mileage of an AT variant is 25-30 per cent lower than that of the MT option. Celerio is fuel efficient and there are no maintenance hassles."

To promote awareness and familiarise users with the technology, the company is training 20,000 personnel across the country to help consumers drive the car. MSIL has chalked out a massive engagement campaign and is targeting to facilitate 100,000 test drives of the car within a month of the launch. The company is targeting buyers in the age group of 30-45 years with the Celerio.

Initial sales would come from urban centres, with the new technology gradually percolating down and boosting demand in rural areas, the company says.

But would the competitive pricing of the AT variant of the Celerio cannibalise sales of MT versions of cars such as Swift and Ritz? Pareekh says, "What we see is whenever a new product is launched, 10-15 per cent of sales happen to customers who were earlier looking at another MSIL product, 20-30 per cent comes from consumers who were deciding on a competing car and the remaining are new buyers. Either ways, our absolute numbers grow. So, that is not a concern." The company started taking bookings for the car from January 25, although its prices will be announced only at the time of launch.

Automatic transmission technology in India has been largely restricted to premium sedans and luxury vehicles. However, worsening traffic conditions has resulted in the demand for automatics increasing in India over the last few years. Yet sales of AT variants even today contribute around one per cent (25,000-26,000 units per annum) to overall passenger vehicle sales. In developed markets such as the United States and Japan, on the other hand, 90 per cent and 95 per cent of the cars are sold are equipped with automatic transmissions.

Besides Maruti Suzuki, manufacturers like Honda Cars India are examining possibilities to introduce products with advanced automatic transmission systems and improve the ease of driving in the volume intensive and highly competitive mid-range segment.

Tata Motors on Monday unveiled Zest, which when it goes on sale in India this year, will be the most affordable automatic diesel car. Tata has announced its all new F-Tronic Automated Manual Transmission (AMT) for the diesel variant of the Zest.

Earlier last month, Honda launched continuous variable transmission (CVT) in the latest model of sedan City. The variant addresses fuel efficiency concerns among buyers regarding AT cars and delivers mileage of 18 km per litre of as compared to 17.8 kmpl offered by the manual transmission version. Tata Motors too is said to be examining opportunities to introduce an automatic transmission variant of small car Nano.