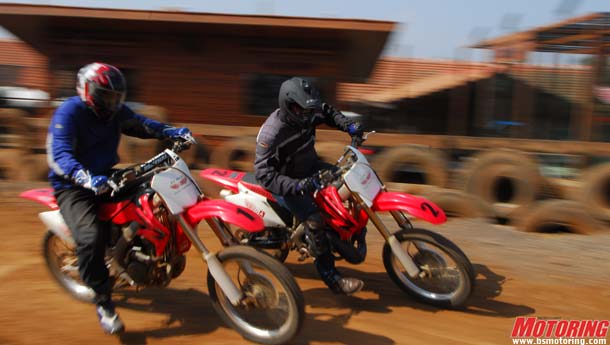 'The first fifteen minutes is strength, afterwards, it's just will power.' These are ex-BSM man Shumi's irreplaceable words in context to riding off-road and I think it holds true for me as well, the only exception being a generous magnification of the 'fifteen minutes' bit. About an hour is what I can manage - and that's completely hard riding - after which I'm just holding on to the handlebars, praying to God a hungry leopard finds me. Quickly.

I've taken a natural liking to riding off-road and despite a slightly dodgy spine, I oblige at every opportunity to stand on the pegs. Why? Because off-road riding is much beyond speed. Speed is an essential element of riding off-road but it isn't the end. So if, on a medium-tight course, your riding mate is on a 450 and you're on two hundred cee cees less, it doesn't decide the winner at the starting grid. Top speed is for free runs. Here, it's the weight/acceleration that really counts.

A 50 bhp off-road motorcycle will 'feel' quicker than, say, a 70 bhp street-sports number. Why is that? Because the thin and tall stance of motocrossers increases the sensation of speed and helping matters are the (relatively) skinny tyres. So you're sliding almost all the time and I think the beauty of letting the bike take its most natural line into a slide (rider's weight always on the outside) and then holding the same with the throttle is completely irreplaceable!

And then you have the eternal yumping ability. I'm a bit of a yump chicken and it scares the living daylights out of me. But I still try. I've fallen head, shoulder and bum first out of a yump but the thrill is matchless. Usually, the first thing we do when let loose on an open field (there are still quite a few of those in and around Mumbai) is look for bumps. Generally, a two feet high bump is a good place to start, especially if you're riding an Indian commuter/150cc motorcycle. No, actually I should have said speed breakers are the best places to begin, but then I'd have to type a disclaimer...

Riding off-road also gives you insights that come in extremely handy on the road. Dirt is, I think, one of the most elementary places to understand and practise counter-steering. It helps if you have the services of knobbly tyres, because then you're sure of the tyres digging in and not plotting to give you bruised knees. And here too, there's a lot of fun to be had even if your bike has a top speed of 18 kph. I fondly recollect sliding a BMW F650 from as low as 40 kph right upto 90 - all in second gear - eventually leading to an imaginary round-about, where I went around in endless circles, decelerating steadily, until I dropped the speed to 10 kph, at which point I also dropped the bike. Ouch!

Off-roading is fun and putting in more miles has been on the cards for a long time now. And I think I just heard Kartik say something about a Hero Moto Impulse long-termer.