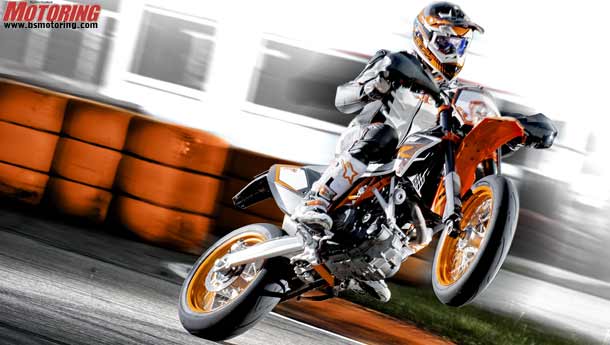 Fast is a relative term. 250 kph on the autobahn isn’t nearly as scary as backing it into a corner at 100 kph at a go-kart track. When it comes to extremely tight supermoto circuits, this is the new king of the ring – the KTM 690 SMC R. The main topic of discussion is agility and thus, weight. Anything flabby or unnecessary was shown the door (or the treadmill) and the result was a 142 kg weight figure. Not the lightest we’ve seen but tell that to the supermoto guys who graze their engine cases off in every other corner.

The SMC R is your supermoto racer for the road with a torquey 67 bhp liquid-cooled, single cylinder motor, top-notch WP suspension front & back with a massive 250mm of travel and radial Brembos to reign in the speed. To knock down lap time records, it’s also got patented tubeless, wire-spoked rims with grippy Conti AttackSM hoops, an anti-hopping clutch and a light chrome-moly tubular space frame.

Supermoto dudes are going to be jumping with joy right about now. If you’ve seen them sliding, you know they’re going to slide the hell out of this SMC R. As spectacularly illustrated in the photo here. It’s true to the KTM catch phrase – ready to race.