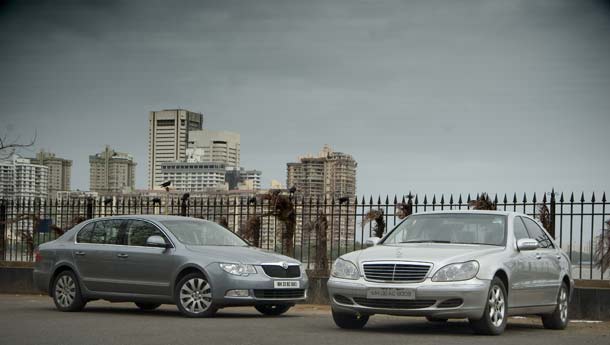 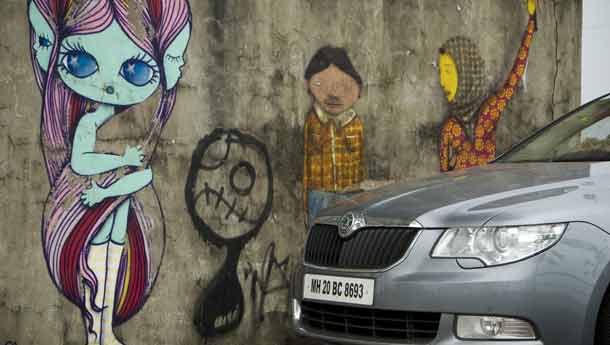 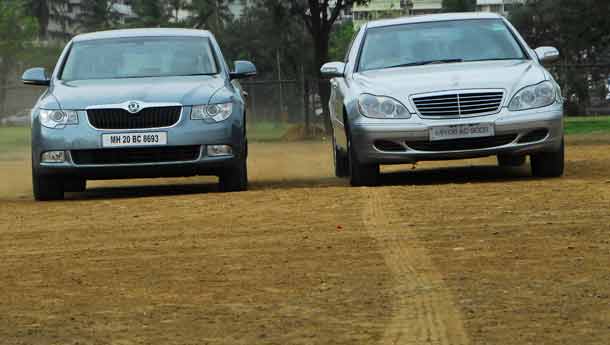 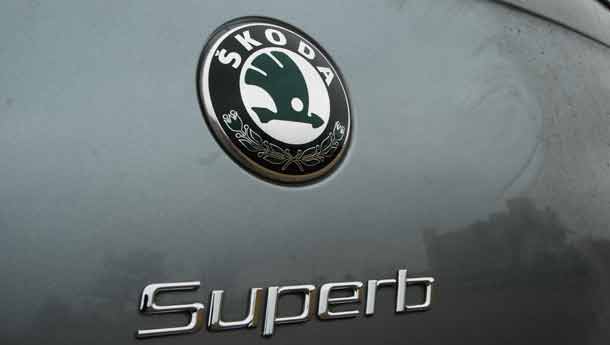 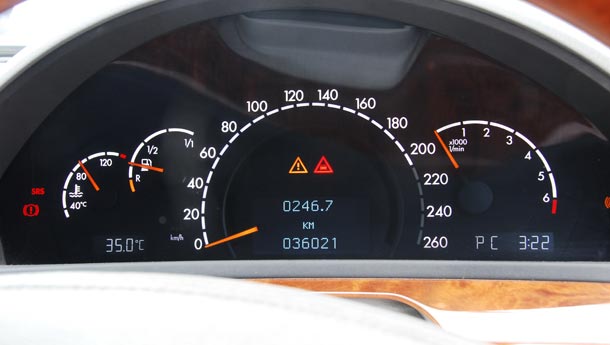 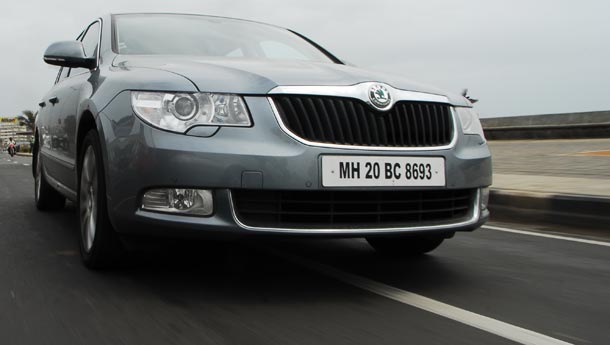 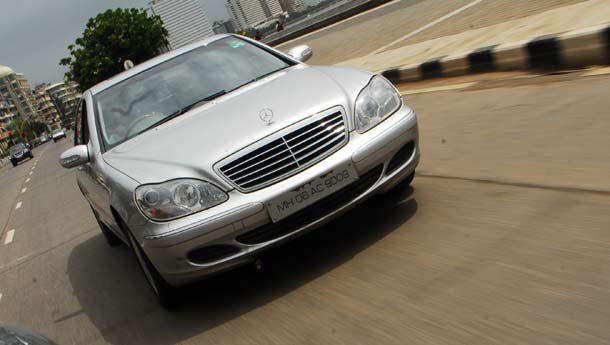 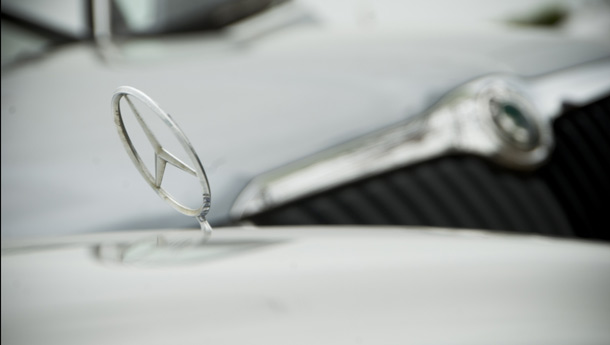 Admit it. You never really say Skoda and Mercedes-Benz in the same breath, do you? Perhaps it's a sign of how far along the Czech car maker has come that this unlikely (yet pertinent) story had to happen. So, let's say that the recession has had no significant effect on your fortunes and you're looking to add yet another luxury barge to your fleet. It has to have style, comfort, power and should make Accord/Camry-driving fellow members of your Board of Directors turn a dark shade of green. One car that ticks the above-mentioned boxes is the Superb V6, Skoda's newest variant of their highly successful flagship and one that I have been looking forward to since driving the diesel iteration a few months ago. The reason? 260 bhp is convincing enough, I think.

But then, as always, there's a twist in the story. What if I told you that you could walk into a Mercedes-Benz showroom and buy an S-Class for the same money as a Superb V6? No, M-B has not announced a clearance sale, it's their pre-owned cars that I'm talking about. A used, last-gen W220 S-Class in good nick versus a new Superb V6. Both are driven by powerful V6 engines, both are well-appointed and both make good sense for those who want that all-important 'something different.' So answer this: would you like to be seen in a Superb or a last-gen S-Class? Now that I've got you thinking twice, please read on.   Primp and Preen
It's a lot of hard work being the high-flying type, I'm told. A lot of that work hinges upon looking the part. And the Superb surely looks the part. A far cry from the barge that was the earlier Superb, the new one has freshness to its design that soothes the eyes. The sheet metal creases and bulges at the right places and makes the Superb look taut and sporty with a dash of classiness as well. But you already knew that. What you want to know is what's different with the V6 and once you look at it you'll be able to tell... nothing. Er, yeah, at first glance (even second, third and fourth ones) you'll have to be an obsessive car nut to be able to tell the difference. For the cheaters, there's no badging to help you either! What we have here is the first 'sleeper' for the luxury car market, then. The 17-inch, ten-spoke alloys are what anoraks will notice first and upon closer inspection, they will also see four tailpipes peeking out mischievously from under the rear bumper. And that's it. Rohin tells me that internationally, the Superb V6 is available with a 4x4 badge on its shapely rear (yes, he defines the term 'obsessive car nut'), but for India it has mysteriously been given the miss. So, the Superb is still a shapely car with ego-boosting proportions and makes for a pretty picture. And then the S-Class rolls regally into the frame.

Okay, so this S350 belongs to the last generation and the mid-2000s. But it is a Merc after all and it still commands respect. Though nobody's going to roll out red carpets for you, one look at that traditional Merc grille and the three-pointed star floating above it is still enough for people to make way for you. The S350 that came for the shoot was a battle-scarred veteran, but its long lines still had that certain something to them. It has no sporty pretensions; instead, it goes for the kind of effect that a luxury liner has on onlookers as it pulls into the docks. Its size has a little something to do with it. It is longer and wider than the Superb V6 which in turn is taller than the S350. Despite its age, the Merc still retains a sense of occasion, an important thing when you're arriving for that board meeting.   Back Benchers
This is where you'll be sealing deals, buying and selling countries and/or waving to your subjects. And at the end of it, you'll want to step out of the car with a spring in your step. Opening the door and regurgitating your breakfast in a five-star hotel lobby wouldn't make you look 'in control' now, would it? Thankfully, the Superb V6 comes with excellent ride quality that will make sure that you reach your destination without a pale face. You won't even know when you pass over minor bumps, while bigger ones will be dismissed with a reassuring 'thunk' from the suspension. The rear seats are supportive and comfortable, while there is so much legroom at the back, you won't know what to do with it! However, the rear seats could have done with more thigh support for taller passengers. While I was being chauffeured around town, my knee would hit the door with even a mildly sharp steering input. That is just about the only fault I could find with the rear. Oh, and there's not a whole lot you can do in the back - there's a lot of space but no gadgets or the sort to fiddle around with.

Should you choose to drive yourself to your weekend haunt, you won't be disappointed either. Again, there is more than enough space and everything falls to hand easily. That well-made feel abounds inside the cabin and the car feels special, but then so do the two other Superbs. There is no question about it - Skoda should have distinguished the V6 by making the insides more opulent, something that prospective buyers would have liked for sure. And one more thing Skoda - what's with the SD card reader?! There has to be the option of a USB slot at the very least.

Then there is the Merc. Step, or rather walk through the S350's rear doors and you will half expect to hear your footsteps echoing inside - that's how big the S is on the inside. Depending on how the S350 that you come across has aged, the quality of the interiors will differ accordingly. Our S350 has been treated well and though it betrayed its age, it was a pleasing place to be in. Not to mention that it was supremely comfortable. The rear seats are electrically adjustable via very cool-looking adjusters shaped in the form of a seat. You sink into the deep seats and are protected from prying eyes by the high window sills. In the Superb, you have retractable curtains to do the job. The Merc's front seats are on par with the Superb's in terms of comfort, but when it comes to the rear, the Merc holds the advantage.   Driving Force
Now for the fun part! The Superb is a driver's car to the core and a different beast than its four-cylinder siblings. Its 3597cc V6 pumps out a delightful 260 bhp and 35.69 kgm that make it extremely enjoyable indeed. The car's 1,750 kg kerb weight is never an issue with all those horses under the hood and it shows in the numbers too. 0-100 kph in 8.1 sec (in the wet) and a top whack of around 240 kph will keep you or your chauffeur entertained for a long time. Power delivery is as linear as an equation and the responsive nature of the engine makes sure that there is no lag due to the DSG gearbox, something that I was dreading before I got the car. The paddle shifters work well if you're in the mood to play 'F1 Racer,' though the kickdown is good enough to make progress by burying the loud pedal into the floor. The raspy engine soundtrack is an added bonus. Handling-wise, the car is lower than the normal Superbs by 20 mm and tramples the road on bigger 17-inch wheels shod with wider and lower profiled 225/45 Pirelli P Zeroes AND it comes with permanent four-wheel drive. And let me tell you, it makes for a cracker of a driver's car! The whole package wraps itself around you and inspires loads of confidence to push the car to the limits. Steering is quick and feedback-rich and braking is precise and strong; the driving fun part would befit an RS version. Hey, I know, since the car is this much fun to drive, it should be badged an RS! Then they'd have badging on the rear, at least. But wait a minute, what's that in the mirror? Oh, it's the S again.

The big barge of a Merc gets a 3724cc V6, one that develops 245 bhp and a Superb-equalling 35.69 kgm. But at 1,810 kg, it weighs more than the Superb and it shows in the performance. But thrilling performance is not what the S350 aims at. What it does is waft (sorry, R-R Phantom!) gracefully at considerable speed in a straight line. Show it a twisty stretch and it's not too happy, though it will carry its bulk around corners with as much grace as it can muster. Also, the S350's size can be a bit of a bother on narrow roads or in traffic, while I never had a problem hustling the Superb along around BEST buses and maniacal Mumbai cabbies. It was only in my building's parking lot that I realised how big the Superb really is. As it stands, the Superb has the edge over the S350 in terms of driving pleasure and manoeuvrability.   Seal the Deal
So, time for the verdict, then. And it has to be the Superb V6. The Mercedes makes sense on so many levels - it's got the presence, the charisma and the comfort. Even if your investments took the beating of their lives at the stock market, your social status would go up a few notches if you were seen in this car. But hey, that's not what it's about, is it? Not when you're straightening your favourite set of mountain roads in a car that is always game for it. And don't forget that innovative twin-door boot that adds an immense amount of practicality to the Superb package. Safety-wise, the Superb gets eight airbags in addition to traction control and ABS and so does the S350. The fact that we pitted the Superb V6 against what was once billed the best car in the world says a lot. And the Superb trumps it too, though the Merc rolls away, indifferent to the comparison. But I'm not sad to see it go because the Superb it is!