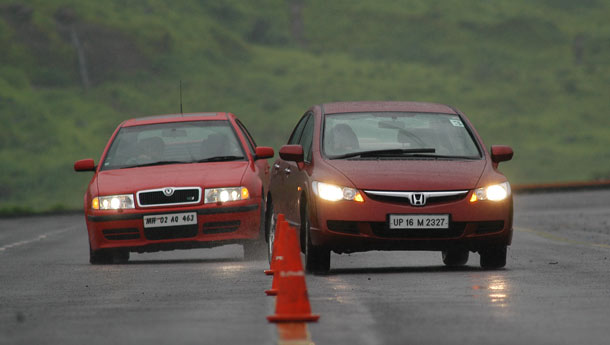 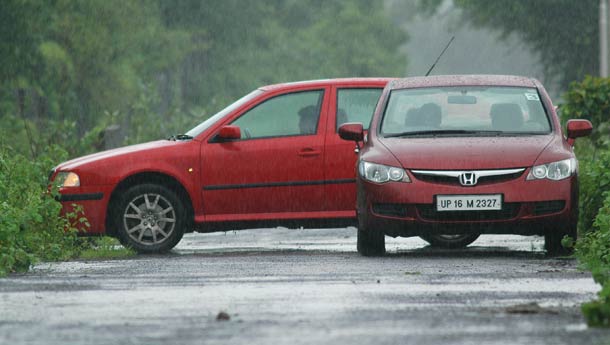 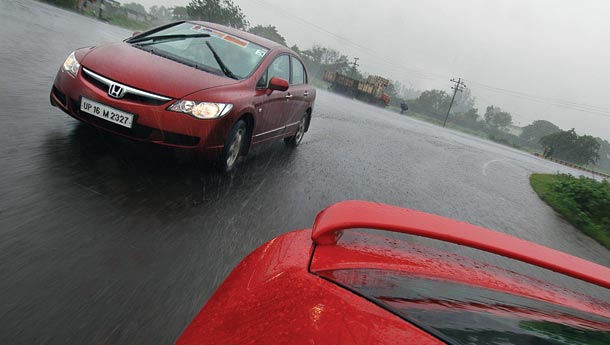 Even if you’ve been reasonably awake over the past few months, you would know that Civic is the new buzzword. Every auto mag cover has screamed its arrival, and if you’ve read any of them you would know that the car is as modern as tomorrow. You would also know that unlike David Beckham or the rest of England, the Honda Civic actually lives up to the hype. And that it’s better than anything around. Yet, to stay true to the ‘first drive-road test-comparo’ routine, it’s inevitable that a shoot-out follows. The competitor too is inevitable.

To be honest, we too thought of bringing the Corolla alongside the Honda, but frankly it’s a bit of a foregone conclusion. Though that’s not to say that we won’t be doing the story – it’s just that we wanted to have some fun with the Civic. After all, this car’s got paddle shifts and that alone is enough reason to celebrate. So we called up Skoda and got an RS. And then we PET-ed them.

The PET, or Performance Evaluation Test as BSM regulars would know, isn’t a race. It’s a one-km course that is specifically designed to bring out the best in terms of acceleration, braking, handling and tyre performance. And even the worst. To begin with, you accelerate as hard as you can from the start, followed by a lane change manoeuvre, before coming to a dead stop (braking as late as possible). A U-turn leads to the slalom (entry speed 60 kph), that’s followed by a 360-degree skid-pad simulator, leading to the start-finish line.  Both cars are given an independent run, so for the record, the lead picture is for ‘photographic purposes only’.

Now, you would think that a 1799cc, 132 bhp automatic Civic would have no hope in hell against a 150 bhp turbo petrol Octy. And you are right. Except that the Civic was over a second quicker in the PET. Surprised? We weren’t. Shocked is more like it. And so we did it again, thrice, with a different driver too! The result was the same every single time. So then, has the new Civic conquered the final frontier by beating India’s only performance car? Well, not quite.   You see, while the Civic might have been faster in the PET, it still doesn’t manage to go as fast as the RS from nought to sixty or a hundred kph. In fact at 11.92 seconds, it’s three clicks slower than the RS to the ton, and is always rapidly losing ground with every consequent metre. So what happened in the PET? Well, when 150 horses arrive at the front wheel all at once, they are usually visible as a cloud of smoke. So while the Civic got off the line cleanly and went around the skid pad as swiftly as a Ninja, the RS lazed around like the Czech mafia. Okay, so there isn’t a Czech mafia, but you get the picture.

Though the Skoda has issues getting the power down, it’s better through the faster corners. The attitude is flat, the slight understeer provides reassurance rather than obstruction and there’s loads of steering feel and a proportional response to the steering inputs. To have the RS carving just the line you asked for is a cinch.

The Civic too has pretty accurate steering and it too traces a beautiful arc through the corners. But the way it’s achieved feels very different from the driver’s seat. You push the wheel rim through a short distance, through quite some resistance, and somehow it’s less remote. In the RS you are the conductor of an orchestra, in the Civic you are the lead guitarist in the band.

The same tune continues even as far as the ride quality goes. The Civic doesn’t have any go- faster bits to live up to, so it is comfortable enough to drive your parents around in – the RS ...hmm, how about your in-laws? The Skoda’s suspension is firm but fair because it’s in sync with the car’s character. It’s more committed, so every time you come across a monsoon-weathered road you have to clench your teeth and pray you don’t leave the underside behind.   But by no means is the Civic a boring car to drive. In fact, when you are seriously on the go, the powertrain is absolutely game to come along. And the paddle shifts are every bit as fun as you expect them to be. The transmission doesn’t blip the throttle on its way down, but apart from that Honda have got the paddle shifts absolutely spot on. The link between the throttle and the smooth, sweet engine is wonderfully precise and there is even a nice sound track to listen to. Incidentally, the noise is the only thing that the RS misses out on in terms of driver involvement – it’s a bit like listening to Van Halen’s ‘Jump’ on volume level two. Still a great song, but it’s just not the same as listening to it with the loud dial turned up to eleven.

The other huge difference in terms of driving these cars is that while you can drive the Civic slowly, you have to make an effort in the RS to refrain from setting off to the redline. The Civic is the more mature car here and unless you are pushing the Honda, it’s self effacing, soft and relaxing. But you really don’t have to drive them to understand this. I mean, just look at them.

The Civic is so futuristic that the face-lift version will probably have wings on it, and let’s face it – a few months from now, the roads will soon be carpeted with it, so no one’s going to feel especially distinctive in one. But the sheer number shouldn’t blind us to the immaculate proportions and beautifully honed surfaces. The RS though is distinctive, or at least distinctive enough. Even from its diesel cousin. There are spoilers, ten-spoke alloys and the all important vRS badge. Enough to make the ten-year old in you take note and feel kicked about.

So which one’s the better car? Well, it’s the Civic. For moving through the urban sprawl and crawl, the Civic is about as painless as transport gets and for most, the chunky chassis and the crisp handling will give them the sporty vibes they need. But the RS is immediately engaging and fits the bill as a sports sedan so well, it manages to make the fun-to-drive Civic seem like a sensory deprivation capsule. And so it wins this comparo.