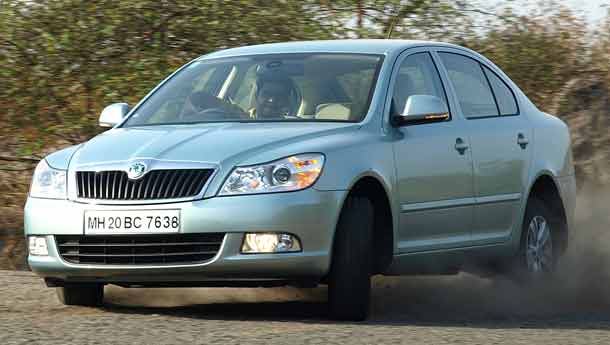 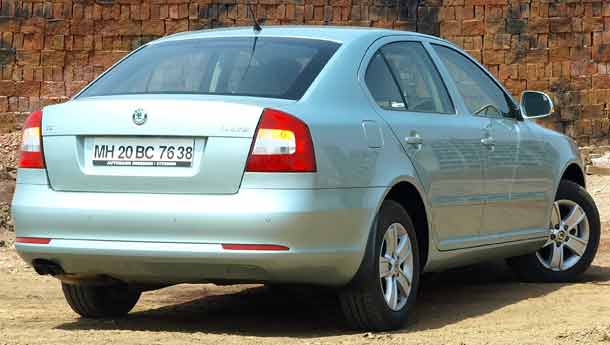 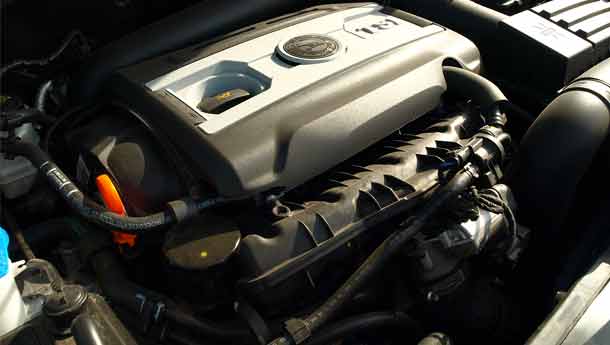 The steering twitched. The dial hit the redline and as I shifted from 2nd to 3rd at about 105 kph, I was hit by a fair amount of torque steer. For once, I wished I had a paddle shift DSG rather than a six-speed manual, for I had to move my left hand to the gear lever for the upshift and that momentary release caused the Laura to move towards the left. The Laura? Torque steer? Doesn’t it have one of the most balanced steering setups on a car in this country? But something was different here. I was behind the wheel of the facelifted Laura, and that too a petrol (yup!) – the 1.8 TSI. And my friend Yuvraj was giving chase in his black Skoda Octavia RS.

We were driving down a relatively empty piece of road, and I was trying hard to shake off the black RS from my rear view mirror. But the size of the speck stayed the same. So, the Laura was turning out to be quick, quick enough to keep an RS wedged to its tail, but not enough to leave the RS a couple of car lengths behind. This, despite the RS being 45 kg heavier and down by 12 bhp on the horsepower count. And to top it all, the RS is a full generation off on the Laura. So how come the old warhorse was giving the young cowboy a run for its money?

Well, the Laura isn’t your RS. In fact, if you look closer, it doesn’t even look like the Laura you and me have been used to. That’s because this is the facelifted Laura, the one that carries forward the design language from the Superb on its nose. Somehow, though, it doesn’t work here. The tight muscular lines of the Laura don’t gel as well with the new organic front end as they do on the Superb. The resemblance between a goldfish in a fish bowl looking at you and the Laura’s new front end is too strong. The eyelash headlamps with the new chrome grille somehow soften the sharp lines of the Laura and even the deeper front bumper and new fog lamps don’t really make it stand out as a looker, especially in this new shade of green. The high-profile 15-inch tyres on the 5-spoke alloy wheels elevate the blandness with the tail providing some relief, thanks to the integration of the RS-style reflectors. The only way of distinguishing the standard facelifted Laura diesel and this is through the TSI badging on the boot.

Once inside, you are greeted by new bits. The steering wheel is borrowed from the Superb, with an updated instrument cluster as well. New colours and digits apart, even the multi-function display looks new, adding some much needed colour to the otherwise drab Laura interiors. The biggest change is reserved for the centre console, where the all new stereo and controls as well as HVAC knobs and buttons have given the dashboard a feeling of newness. The upcoming 2.0 TDI, with the engine borrowed once again from the bigger Superb, will sport even more plush interiors and features, including a touch screen stereo, similar to the one on the bigger brother. There is a lot of beige on the inside of this TSI, to liven up the insides, though the material on the seats looks like it will need a lot of scrub and rub to keep it in top notch. Side bolstering on the front seats keep you nicely sunk in and raring to go. Sporty in accent, but not enough to wean you away from the RS. Where the imaginary RS co-passengers would have cribbed about sore ankles due to the lack of legroom in the rear seat, the ones in the Laura would have just continued with their conversations, as if nothing had happened.   But right now, I was a little concerned with that black RS that refused to let go of my tail, like a radar guided missile. Then the road curvature started to increase and the air started to get thinner. And soon enough, the Laura started to distance itself from the RS, but not enough to completely disappear into the blue yonder. Yet it was getting apparent that the generation-up 1.8 TSI has some serious poke up its sleeve. With power and torque figures identical to the Superb, the ‘lighter by nearly 200 kg’ Laura starts to show who is boss. While the additional horsepower over the RS is available from just 4500 rpm, vis-a-vis the RS’ 4700 rpm, the Laura slams the door on the face of its predecessor on the torque front with the full 25.4 kgm starting to sing at just 1500 rpm. This doesn’t mean that the 21.3 kgm of torque on the RS is poor, but it just feels inadequate to keep the RS firmly hooked to the Laura’s tail. This also shows when the peak 160 horses start to sing in a straight line, clutch be given a damn. With just 200 km on the clock of our mint fresh Laura test car, the acceleration numbers proved to be rather impressive. The tonne was dismissed in just 8.46 seconds, while the top speed went past the naughty side of 220 kph. Sounds like a repeat of the RS? Well, when we tested the RS a couple of year ago, it hit the tonne in 8.34 seconds and went on to hit 220 kph too. Passing speeds too sound similar, with the Laura just a tad quicker. Consider a Laura with more kilometres on the clock and an 8 second dash to 100 doesn’t seem out of the reckoning.

Unlike the RS’ sudden surge when the turbo starts to spool, the Laura shows little lag, though it’s still pretty perceptible. Combined with the six-speeder’s sharp shifting and lighter clutch – and not to forget – tuning that also makes the Laura more driveable, the RS finds itself with its credibility intact, but with less useable power on a regular basis than the Laura.

Despite the power deficit, the RS still kept closing the gap as the road started to get even tighter. The use of 15-inch wheels and slightly less wide tyres made the Laura more susceptible to some understeer. Unlike the neutral and well-balanced mannerisms of the Laura 1.9 TDI, the 1.8 TSI with smaller rubber can’t translate that around curves. Grip doesn’t build as well and part- throttle tackling of bends just requires an extra bit of caution, despite the presence of ESP. The RS, shod with those 16-inchers and 205 section tyres, uses its power deficit to the maximum and gets the better of the Laura around a set of twisties.   But the RS just can’t provide the kind of ride comfort that the 15-inchers gift the Laura. More adept at thumping the road under its feet, the Laura just provides a much better ride, even though the setup is slightly stiff. This slightly stiff setting works fine on a well paved road with small bumps. Larger bumps tend to upset the wheel’s lateral motion and thumps start to sound like thuds. Somehow, Skoda haven’t managed to get the ride/handling bit sorted with the 15-inch setup, so we believe 16-inchers are the way to go, even if it means surrendering some of that thumpy ride.

Eventually though, this Laura isn’t an RS. It’s not just the body kit or the handling setup that we are talking about. It boils down to the pants-on-fire experience. In a straight line, the Laura behaves just like the RS with its sharp throttle response and turbo surge, but take it down a nice challenging road and the Laura feels wanting. Wanting not so much for its lack of dynamic ability, but the lack of that edgy feeling that has made the RS develop such a cult following. Maybe the feeling comes from the fact that my first drive in the RS was at a very impressionable age, and at a time when anything sub 10-seconds to 100 was considered eye-poppingly quick, and there weren’t more than a handful of those around. Having driven cars that are way faster than the Laura, it still, somehow doesn’t excite enough, despite very similar performance numbers to the RS. It just doesn’t feel as raw as the RS, or even as feelsome. Neither does it come in the colours that excite your retinas – a loud yellow or blood red as on the RS. And there is no body kit with gorgeous spider web wheels either.

Nevertheless, the Laura is exciting, and from what we hear it’ll even fill the gap left behind the RS with a price tag somewhere around Rs 13.5-14 lakh at the time of going to press. That means, if you dearly miss the RS, this is a good replacement, especially if you shift to larger tyres and wheels. But for the equivalent of Rs 14 lakh, you can also buy two used RS’ – a tempting enough proposition. If getting chased by one wasn’t enough, imagine the impact of two!