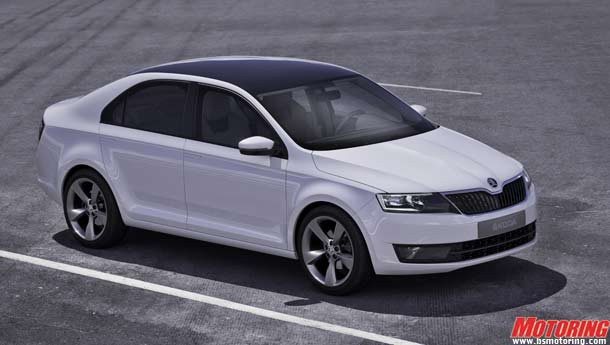 I write this while seated at the Volkswagen hospitality centre at the Frankfurt Motor Show. The location is great – it's right in the middle of hall number three, where Volkswagen is showcasing all their brands, and it's also elevated, so you get a birds-eye view of all the cars on display. To my right is Skoda, with their MissionL concept and a bunch of other cars including the Roomster. The MissionL is among the more interesting concepts on display, because it looks like it'll be the replacement for the Octavia at some point, and also because it shows a new design language from Skoda that is sharper and more slick. Skoda also has the nicest show-girls, and what is an auto show without show-girls? By nicest I mean most approachable – they're happy to chat with you.

Porsche has a lovely stand with a classic 911 on display, which as far as I'm concerned is more beautiful than the latest iteration of the legendary sportscar – I could spend hours just looking at it.

The Bugatti stand has a an absolutely mad edition of the Veyron, with an outlandish paint scheme and porcelain-based interiors. I see fellow photographer Suresh Narayanan from Auto Bild India taking photos of it from up close, and being gently warned by the cars minder not to scratch it.

Right next to the Veyron is the Bentley stand, where the new Continental GTC is on display. Frankly, it looks exactly the same as the older car - you would have to look very closely to spot the changes.

The Lamborghini Gallardo Super Trofeo Stradale is probably the hottest looking car in this hall, with its outlandish rear spoiler, and the Aventador next to it is of course utterly intoxicating to look at – it's pure sex on four wheels.

As for the Volkswagen display, the most important car is of course the Up, a small car with what looks like a big future. Volkswagen has high hopes for it, and they want it to be as timeless a design as the Beetle and Golf. It's an ideal size for India, but will of course have to be heavily localised in order to be price competitive. According to Volkswagen, something like the Hyundai i10 could be its natural competition. The new Beetle is also here, and I have to say that it looks great – I would buy one, which is not something I could say about the previous car.

SEAT - now there's an interesting brand for you. They make cars that shouldn't look right, but somehow they do, and by all accounts they're pretty good fun to drive as well. Why don't they bring the brand down to India? Volkswagen says the market isn't ready for it, which is probably true.

All these are of course just part of the Volkswagen umbrella, and there are many more brands and cars around. Still, I can't help but feel that this year's show is rather subdued, which is perhaps a reflection of the economic turmoil in Europe – even the show girls look disinterested, for the most part. The buzz that is present at most auto shows is missing, and there really is no car here about which one can get really excited. I wouldn't mind one of those Mini Coupes, though.