Shimla - A mountain of a molehill 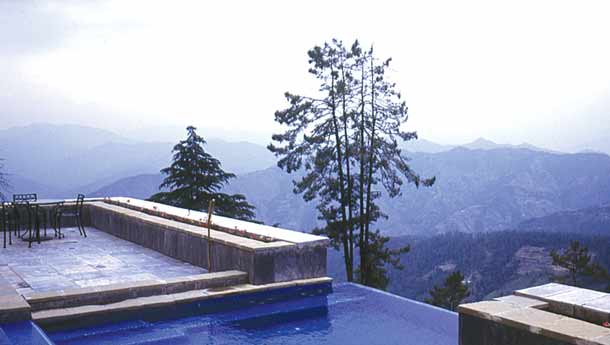 Shimla stinks. There, I said it straight off the bat. Those of you who’re reading this in the hope that you’ll glean some useful information about the place so that you can go there someday... well, you can stop reading now. There isn’t any such information because I haven’t written about it. As a matter of fact, I very nearly didn’t write this piece at all, such was the level of disappointment inflicted upon me by Shimla. However, I also realised that it wasn’t appropriate to simply say that the place sucked, thank you and good night. You see, people who haven’t been to Shimla tend to have a certain quasi-romantic picture of it in their mind’s eye (ok, ok, I did too). The very name gives rise to visions of white gloves, frilly parasols and scones with tea, of stiff upper lips and waxed moustaches, of a genteel, more civilised era. For such unsuspecting souls, the first couple of words of this piece will read about as subtly as a drive-by shooting. ‘Why is this dude so anti-Shimla?’, they would ask, their romantic visions (quasi or otherwise) lying in smouldering ruins. For this reason, I had to explain why it turned me off so violently (naturally, the fact that I wouldn’t have got my salary if I hadn’t written an article had nothing to do with it). Here we go, then – why exactly does Shimla ‘stink’?

I may as well begin at the beginning, as it were. I’ve been trying to go to Shimla for the last two years (with my head full of aforementioned notions), but it hasn’t worked out for one reason or another. Consequently, when everything finally fell into place, I was more than pleased. The drive up from Delhi had been great, the weather was superb and I was looking forward to a bit of R&R rather keenly. Unfortunately, my pleasant state of being began to recede faster than Salman Khan’s hairline as I covered the last few kilometers into town. The landscape that had only a short while ago consisted of rolling hills and little villages suddenly transmogrified into an orgy of hideous concrete structures, most of them hotels precariously balanced on the edges of slopes. All manner of vehicles were parked on both sides of the road, a procession which continued right into the centre of town. Every few yards, some fairly dubious looking individuals would literally hurl themselves at my car in an effort to get me to stop. Why? They were touts for the fifty squillion hotels in Shimla, trying to grab customers fresh off the road. Obviously this was seriously annoying, but there was also a pathetic sadness in their desperation that depressed me a bit.

Things proceeded to go rapidly downhill from here onwards. Traffic that would have done Mumbai proud ensured that progress into the centre of town was agonisingly slow. Hordes of noisy tourists and locals swarmed all over the place, like ants on particularly potent amphetamines. A cacophony of vehicle horns blared non-stop, while harassed policemen made vain efforts to inject order into proceedings. You remember those movies where a central character, usually fairly stressed out, is assaulted by a montage of images and sounds until he holds his head and screams out loud? I felt just like one of them. I didn’t yell, however; I counted to ten and looked for a parking space, so that I could explore the town on foot (not that I had a choice, since cars aren’t allowed into most of Shimla’s main areas). As it turned out, there wasn’t any space left, so I had to drive back out of town, park the car in a field and walk back to Shimla. Not a good start...

I walked up to the Mall, a stretch of road that was once the place to go dressed in your Sunday best and show off a bit, but what is now a maddeningly overcrowded shopping area with not much going for it – unless you’re overjoyed by the prospect of buying lots of tourist tat. By now, I was totally worn out and every fibre in my being was screaming ‘Get out of here!’ but I hung on and looked for a vantage point that would give me a panoramic photo op of the town. I found one and immediately wished I hadn’t; as far as the eye could see, the eyesore that is modern Shimla fanned out over the hills, every square inch of land appropriated to make way for increasingly ugly and totally inappropriate architecture. That did it for me – I packed up my camera and walked straight out. I felt incredibly sad as I did so, both for myself and for Shimla; for myself because I’ve never left a place I’ve visited feeling so negative, for Shimla because of what it had become – a tired, ravaged shadow of the beauty it once undoubtedly was.

Despondent as I was, I came within an ace of calling it a day and driving back to Delhi, but then something happened that reminded me why I love what I do – quite unexpectedly, I discovered the proverbial oasis in the desert. The little town of Shoghi, the last settlement before Shimla and on initial viewing about as interesting as a used teabag, turned out to be a complete life saver. I don’t know quite what made me turn off from the main town and towards the road leading to the Tara Devi temple, but I’ll put it down to a case of good old pit-of-the-stomach.

It was amazing to see what a little turn off could do to the character of a place, not to mention to my spirits. While Shimla had been dreary and devoid of cheer, Shoghi was the answer to the dreams of every traveller seeking a bit of peace and quiet. When I looked out at the horizon, I saw exactly what I should have – wooded hills, as yet untouched by bulldozers, enveloped by a clear blue sky. A sign on the road advertised Sunrise Villa, a holiday home that turned out to be delightful. Run by a retired couple, it sat in splendid isolation near the railway tracks of the Kalka-Shimla route, with great views out over the hills. Now this was very definitely much more like it. Romesh Aggarwal, the jovial gentleman who ran the place, gave me a grin and said ‘You look like you’ve just fled from Shimla’. ‘How on earth did you know?’ I replied. ‘Oh, they all look the same – slightly depressed and harassed’. Well, at least I could now take comfort in the fact that I wasn’t the only one with a Shimla allergy. ‘Don’t worry, you can relax and unwind here, although there’s not much to do’. ‘Amen’, I replied and proceeded to do just that over the next few days. I took long walks along the lovely railway tracks, took a train ride on the ancient Kalka-Shimla railway, helped Mr. Aggarwal water his apricot and almond trees (and ate most of his crop in the process – sorry, Mr. A), lazed on my balcony while drinking tea and reading,ate spectacular home-cooked Punjabi food while Mrs. Aggarwal fussed over me and essentially did all the things that I had wanted to do in Shimla but couldn’t. As a travel hack I’ve learnt to make the best of what I’ve got, but sometimes, more than a planned itinerary, I need a stroke of luck to make my day.

A lot of people will tell you that Shimla ‘isn’t what it used to be’. Too bloody right it isn’t. The same people may tell you to ignore this and go there anyway, to sample remnants of its charm. To them, I say humbug. Shimla doesn’t merely have ‘cracks in its facade’, to use a cliché - it collapsed in on itself years ago. In case you’ve read all this and still wish to go, well, here’s a few things to see and do. Shimla is built along a central ridge surrounded by seven hills. Most of the ‘sights’ are to be found on these hills. Among the more interesting ones are Observatory Hill, with the splendid Viceregal Lodge; Summer Hill, with the Himachal Pradesh University and a couple of old mansions; and Jakhoo Hill, where there’s a Hanuman temple and which has good views (if I may use such a term) of Shimla. In Shimla, it’s de rigeur to go to the Mall and, erm, just loaf around. There’s plenty of touristy shopping and scores of places to eat, some of them quite good. To be perfectly honest, however, you’re much better off stationing yourself in Shoghi, where all is peace and harmony. It’s only 13 km from Shimla, so you can still make a day trip.