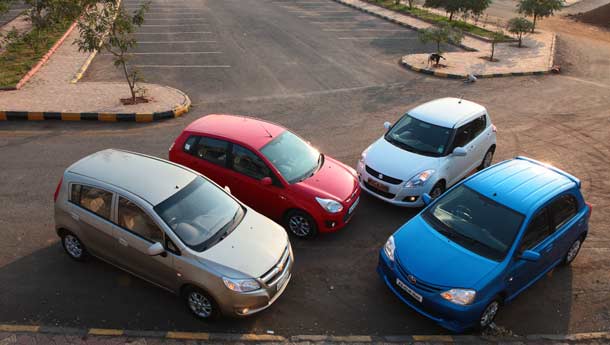 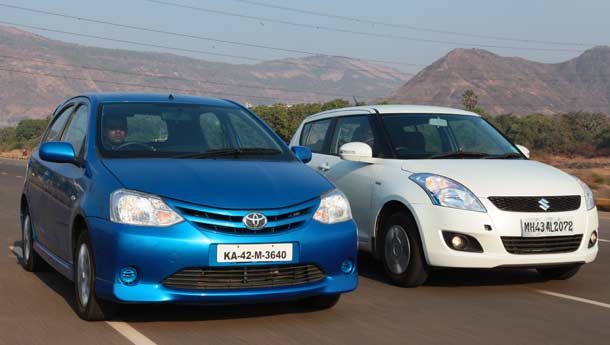 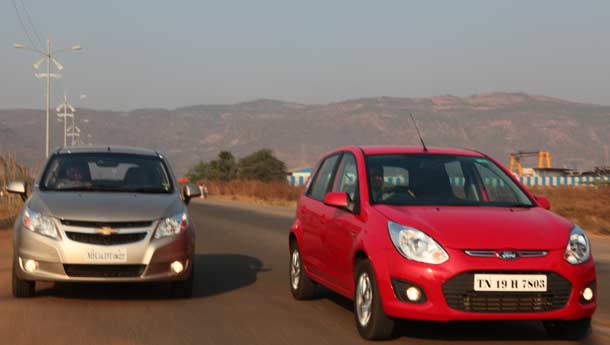 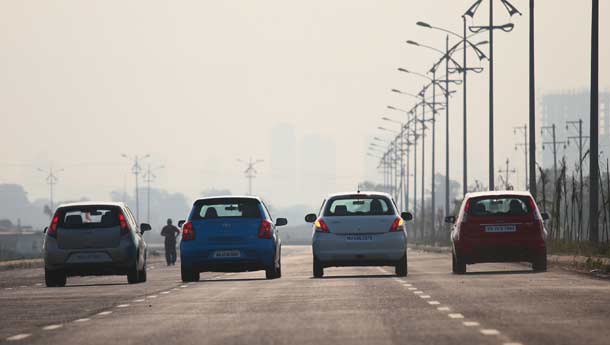 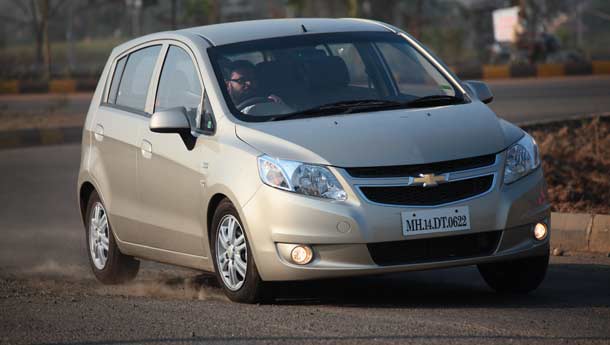 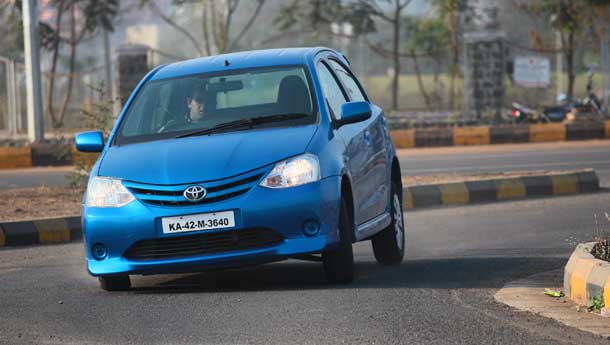 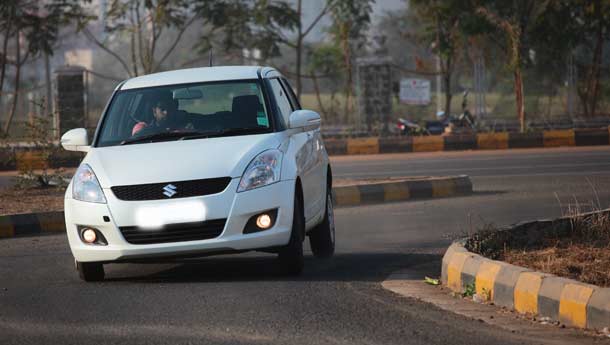 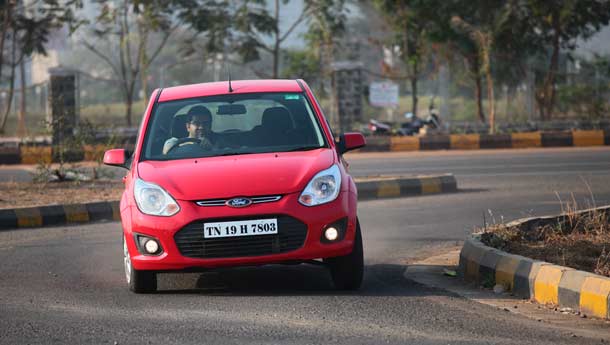 Let’s be honest. While the supercars and exotics are exciting to read about, when it actually comes down to buying something, these diesel hatchbacks are what most of us are going to be looking at. Frugal diesel engines and good space on the inside mean that these get a lot more attention than the other hatches in the market.

As far as Chevrolet goes though, they’ve tried hard to lure the premium hatchback customer into the showrooms with the Aveo U-VA, but the lack of diesel engines did them in and it was discontinued quietly. But this time around, they’ve come in with the ubiquitous 1.3-litre MultiJet Diesel in tow. Let’s check out how the diesel Sail U-VA fares against the competition, then!

On the outside, the Sail looks a little bland, to be honest. Maybe it’s the colour, or its slight resemblance to the earlier Aveo U-VA, but the Sail just didn’t manage to turn any heads while I was driving it.

Of the whole lot, the Liva, in its electric blue shade managed to attract a lot more attention than the rest. The freshly facelifted Figo also stood out, thanks, in part, to its bright red colour. Of course, the Swift is so common that you wouldn’t even bat an eyelid when one passes you by, but on its own, the Swift is quite a looker.

While these are all priced similarly, there’s a lot of difference in the way they’re put together. Starting with the Sail, the interior is rather disappointing at first glance, lots of beige and grey hard plastics coat the interior. There are a few nifty touches here and there though, like a sloping foot-rest for the rear seat passengers and a split-folding arrangement for the rear seats that allows to you carry everything and the kitchen sink with you. The gauges looks nice, but in terms of functionality, I found it lacking. The digital tachometer doesn’t give you much information about where the redline is and there’s only one tripmeter on board. It feels too sparse on the inside. There is ample room in the car, especially the rear seat, but they are hard and even the ones in the front don’t provide enough support.

The Liva lags behind in terms of interior quality and layout. The centrally placed instrument cluster takes some getting used to. There are hard plastics everywhere, and you forget you’re in a Toyota. The seats with the built-in headrests are wide and accommodating, but lack any sort of lumbar support. You can’t, though, fault the ample room on offer here. It’s easily the most room available on any of the cars here and that does help redeem itself, somewhat.

That leaves us with the Swift and the Figo. The all-black interiors of the Swift combined with the small greenhouse leaves you feeling claustrophobic at first, but all-in-all, you’ll find that the inside of the Swift is a pretty good place to be. There are high quality plastics all around and save for the odd-place where corners have been cut, you don’t necessarily feel it. The only trouble being the high opening for the boot and the rear seat width. The seat itself is quite comfortable, but don’t expect to seat three people back there without hearing complaints from them.

The recent facelift gave the Figo some blue accents on the inside, which takes away some of the monotony of an all-black interior while giving the feeling of space as well. Like a few recent Renaults, the Figo now comes with steering column mounted audio controls, which, once you get used to them, feel very natural to use. There are also enough cubby holes inside, so stowing away your belongings won’t be too much trouble in the Figo. Add some excellent boot space and you have a great combination. It has decent space, with good enough shoulder room at the rear especially, but the seats could have done with more side support  and the fixed headrests at the rear are inconvenient too!

Although derived from GM’s Chinese partner, the Sail has been optimised for Indian conditions, and the suspension was one area that was given great importance. Despite using running gear that essentially goes as far back as the Opel Corsa that was once sold here, the Sail rides brilliantly, soaking up all the potholes and undulations with ease. One of the best-riding hatchbacks in the country, the Sail seems to put bad patches of road behind it with some authority. Because of this though, there is some body roll as you go into a corner, but it’s not so much as to cause seasickness. Unlike the other cars here though, the Sail’s steering feels overservoed – it takes very little effort to turn and it doesn’t tighten up much even as the speeds rise.

The Liva comes with a nice and beefy steering wheel to hold, but doesn’t exactly deliver on the promise of sportiness. It doesn’t feel as agile as the others here and tends to understeer as you get closer to the limit, but it’s also fairly comfortable so you can give it a pass. The ride is pliant enough, but high speed bumps to tend to unsettle the car a bit, so it’s not too confidence inspiring as the speeds rise.

The Swift is on the sportier side of things, with a suspension setup tuned more towards driver satisfaction than anything else. A very communicative steering and supportive seats definitely put a smile on your face when you push this car closer to its limits.  On the other hand, it manages to strike a nice balance between sportiness and comfort. While it’s not as comfortable as, say, the Sail, it won’t leave you with a broken back either.

Of all of these hatches though, the sportiest one has got to be the Figo. Its low slung stance and chunky steering wheel hint at what’s in store for you, and boy does it deliver! Good body control and a well weighted steering wheel let you have some, no, a lot of fun! Ride quality does suffer a bit in this trade-off though, high speed bumps are taken well, but at low speeds, the ride tends to get a little choppy. If you’d like to have some driving fun though, you’d definitely want to be behind the wheel of either this or the Swift.

In terms of engines, we’ve got two variations of the 1.3-litre MJD engine in the Sail and Swift, and a couple of 1.4-litre diesels in the Liva and the Figo. Though we know it as the Fiat MultiJet, it was actually co-developed with GM (and that’s how Suzuki got a hold of it, but I digress) and for this application, they’ve managed to tweak a few things here and there to extract more power from the mill. In the Sail, the 1.3-litre engine manages to make 77 bhp of peak power as compared to the 74 horses the Maruti Suzuki engine produces. And it’s not just peak power either, the Sail also feels a lot more driveable in the city than the Swift. There’s still turbo lag, but it’s not nearly as prominent. You’ll still have to wait till about 1900 rpm to get to the meat of the powerband, but below that, you can still get by in the city without downshifting. The gearbox, too, is a revelation. Unlike the petrol version of the Sail, which comes with a very vague and notchy shifter, the one in the diesel offers positive shifts and is great to use. The taller upper gears really help it in terms of fuel efficiency too.

The Figo comes with a 1.4-litre Duratorq mill which is brilliant in the city; there’s very little lag and power delivery is very linear. On the flip side, it does seem to run out of breath sooner than the others here, but lower down the rev range, it trumps the others for driveability. You won’t find the need to downshift as often in the Figo too, thanks to the low-end torque, but the overall torque figure is the lowest among the quartet. The engine note though is a bit coarse and the gearshifts feel ever so slightly rubbery with the facelifted model, unlike the earlier one.

In the case of the Swift, the engine is a bomb, shoving you back into your seat as the boost comes on, but when you’re below 2000 rpm, the engine struggles to keep you moving. Overtaking moves and city driving will involve a lot of downshifts. It’s a good thing, then, that it comes with a gearbox that’s snickety to use. Moreover, the low kerb weight also aids performance when you decide to flog it.

The 1.4-litre unit on the Liva makes the least power of all the cars here, but it’s also got the least weight of them all, so the power-to-weight ratio is still favourable. Aside from making power, the engine is also pretty good at making noise, it seems, as most of it filters into the cabin. The lack of a tachometer means you can’t optimise your driving for mileage either. As far as sheer performance goes though, the Liva does pretty well for itself, hitting 60 from standstill in 5.9 seconds and the tonne in 15.6 seconds. Just make sure you put on some ear plugs before you try something like that on your own though.

And it all comes down to...

All things considered, this is how the chips fall:

Last place is the Liva, because, while it may look brilliant from the outside, you’re going to be spending your time inside it, not admiring it from afar. So, for that, decent quality interiors and certain basic features like a stereo are more or less requisites. Especially considering that engine and road noise intrude into the cabin. The Liva certainly has a lot of potential. With a little more insulation and more features added into the mix, it has the makings of a sensible buy.

The newbie comes in third in this comparo. The Sail has fantastic ride quality and brilliant use of space. The 60:40 split rear seats which fold flat give you amazing versatility when it comes to loading it up, but like the Liva, the interior quality isn’t up to scratch and it could have done with a few more features considering it’s price. It also lacks some spice, key to clinching buying decisions.

The Swift is our long time favourite and even took home the BSM Car Of The Year award last year, but that’s still not enough for it to win this comparo. It’s a great car on the whole, comes packed with features and is pretty sporty to drive, but it loses out on practicality. The rear seat can’t take three people comfortably and the boot can only take a couple of bags at the most, If you don’t forsee any airport runs or carting around many people in the near future and are looking for a fun-to-drive car, this one is definitely worth a look!

And that leaves us with the Ford Figo as the winner. The Figo has pretty much everything on its side. There’s interior space, quality, boot space and even a competitive price tag! Add the fact that it’s quite fun-to-drive to the practical package, and somehow it seems to grab your cheque book much better than the others. So, that pretty much makes it a no-brainer if you’re in the market for a diesel hatch.