Riding on strong festive demand, the passenger vehicle segment - cars, utility vehicles and vans -  is set to post a double-digit sales growth of 14-15 per cent in September. This will be the third consecutive month of a double-digit volume growth. Top three players - Maruti, Suzuki, Hyundai and M&M - are expected to post robust growth. Toyota, Renault and Nissan will also report gain in volumes. The growth is significant as the second half of September is marked by Shraadh, considered inauspicious for new purchases by many. Companies will announce September sales data on October 1.

The biggest factor behind the strong volume growth in September will be Maruti Suzuki’s performance. According to industry watchers, the country’s top car manufacturer, which enjoys a 47 per cent market share, is expected to report a sales growth in excess of 15 per cent due to the strong demand for Brezza and Baleno. Dealers in most states are stocking vehicles to make deliveries during the Navratra, a nine-day auspicious period begins on October 1.

Both Hyundai and M&M will also add volumes to the industry though they are unlikely to post a double-digit growth, said an industry executive. Japanese auto maker Toyota is also expected to post significant growth in volumes as demand for the new Innova Crysta remains strong and the sales of Innova and Fortuner in the national capital region has resumed. 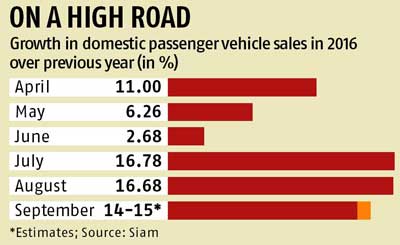 Renault, which just sold 1,781 vehicles in last September, is expected to register a substantially high growth. The Kwid, its best seller, will help it in posting a triple-digit growth. Renault’s alliance partner, Nissan, is also expected to post a double-digit growth on the back of its new product, redi-Go. The company on Thursday launched a sports variant of redi-GO priced at Rs  3.49 lakh (ex-showroom, Delhi).

German carmaker Volkswagen is also well placed to show a double-digit growth on a low base of last year. Its volume last September was hit following the global emission scandal. It has been growing for last two months on demand for its new compact sedan, Ameo.

However, some players continue to see challenges in volume. Japanese auto major Honda is expected to see another month of a decline in volumes.

Ford could also see a flat to negative performance, said an industry official.

With a double-digit volume growth of 10.74 per cent in the April-August period, the industry looks well-placed to post a double-digit growth in FY17 after a five-year gap. Positive triggers have come in form of a good monsoon and higher pay for government employees. The industry sold a record 2.78 million passenger vehicles in FY16 and, so, a double-digit or even high single-digit growth on top of that means approximately three million vehicles will be sold this year.