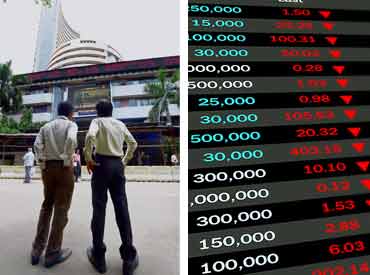 A bout of volatility was witnessed as key benchmark indices bounced back after slipping into negative terrain. At 12:20 PM, the barometer index, the S&P BSE Sensex, was down 24 points at 27,435. The Nifty 50 index was down 3 points at 8,494.

In overseas stock markets, Asian stocks were trading higher as the world's most closely watched election draws near. Japan's Nikkei 225 was, however, was down 0.07%. US stocks on Monday, 7 November 2016, had their best trading day since March on a percentage basis.

Gains were broad, with the Dow Jones Industrial Average reclaiming the key 18,000 level and the S&P 500 snapping its nine-day losing streak, the longest since 1980. The slide had been attributed partly to polls showing a closer contest between Clinton and Republican rival Donald Trump.

Tata Motors surged 5.36% to Rs 534.50 on reports that a foreign brokerage has upgraded the stock to outperform from neutral earlier and revised target price on the stock to Rs 720 from Rs 510.

IT major Wipro rose 0.12% to Rs 451.50 after the company announced the launch of its Open Banking application programming interface platform. The announcement was made after market hours yesterday, 7 November 2016.