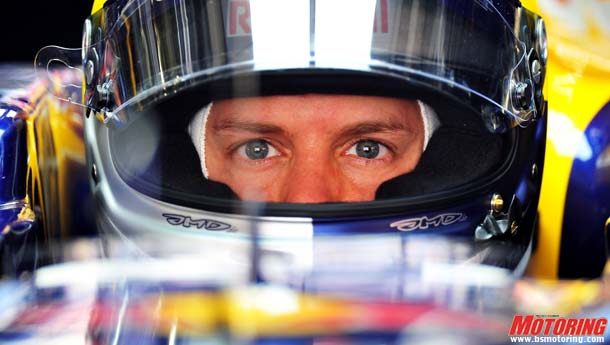 Sebastian Vettel has done it again. After conquering the Australian GP, he has repeated his performance once again in Malaysia to win his second GP of the season and lead the championship by 24 points.

A race that was highly anticipated to turn into a wet race, Sepang eventually saw as many as eight retirements. Vettel managed to have a strong start while Hamilton was overtaken by a hard charging Heidfeld who managed to jump five places up and into second. Michael Schumacher who qualified 11th too had a dream start, climbing up three places. Hamilton tried hard to catch up but couldn't and at the end of lap two, Vettel had opened up a two second gap on Heidfeld.

Meanwhile Vettel's team mate Mark Webber had slipped to tenth at the end of the fifth lap with Hamilton closing in on Heidfeld. But by then the rains had threatened to lash the track and spots of rain were visible on the next few laps. By lap 13-14 it had become serious enough and the cars found it difficult to stay on the track. In the melee, Narain Karthikeyan of Team HRT retired, while most of the leaders continued on their soft compounds that were not only wearing out fast but weren't providing adequate grip. By lap 20 the rain clouds started to clear out and cars started to pit in for a fresh round of soft tyres.

Ferrari's Fernando Alonso utilised the misfortune of others and climbed to third. And with Heidfeld in the pits it meant Vettel lead from Hamilton and Alonso. Button had in the interim climbed up to fourth while Vettel and Hamilton pitted in on lap 25 to make way for Alonso to take over the lead of the race. By the time the second round of pitstops took place, Vettel was back in the lead with Jenson Button right behind him followed by Mark Webber, Hamilton and then Alonso. Alonso would eventually clip Hamilton and end the race in sixth with Hamilton in seventh.

Thus the race went ahead with Vettel leading the pack despite losing out on KERS, Button in second and Heidfeld finally managing to cock a snook during the final round of pitstops and into third place. Webber tried hard but could only manage fourth with Massa upholding Ferrari's honour to finish the day in fifth.

Here is how they finished: