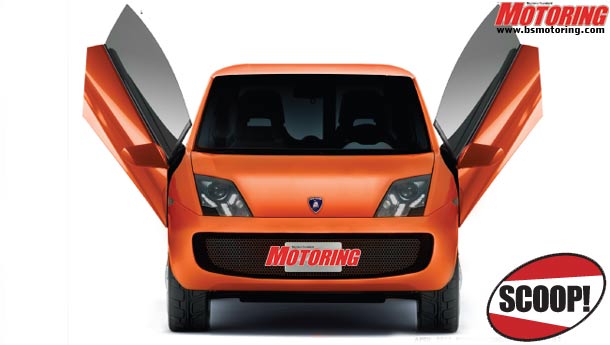 Far away from the prying eyes of a large number of auto journalists at the Geneva Motor Show, BS Motoring got exclusive access to what would be Lamborghini's answer to the Aston Martin Cygnet. In a private display to very select journalists, Lamborghini lifted the wraps on its small car concept, BS Motoring being the only Indian publication to be invited. Based on the Volkswagen Space Up! concept, the Lamborghini Picador (named after the horseman who jabs the bull with a lance during a bullfight) is just a concept for now, but come April 2012 and Lamborghini is looking at unveiling a production version of the same.

Speaking exclusively to BSM, Robert Buffone, Director of the ultra-secret Special Engineering Services at Lamborghini said that the concept takes inspiration from the Aventador in 'soul and spirit'. Unlike the Up!, this car is likely to be powered by a four-cylinder engine that utilizes the same bore and stroke as the one found on the Aventador. Given that, we expect displacement to be around 2164 cc, slightly unusual for a hatch. 'We want to ensure that our car stays ahead of other hatchbacks' Buffone said and it might just be so. Using not one but four turbos - two small and two large, this car has the potential to lick every known hot hatch in existence. It could end up producing over 300 bhp from its midship located engine.

This genuine 2+2 seater could potentially become the quickest accelerating hatch on the planet, given the Up!'s low kerb weight. Buffone said, 'The reason for selecting the Space Up! was for the fact that it provided enough space behind the seats for the engine and all the plumbing for the turbochargers, besides having to place the scissor doors.' Using Lamborghini's trademark e-gear setup from the Gallardo, the car would come with a flappy paddles behind the steering wheel, that in true Lamborghini tradition stay fixed to the steering boss. Using some of the learnings from the Sesto Elemento and Aventador, expect the car to be super-light – nearly 950 kg and Lamborghini says there's nothing to stop them from making a Superleggera version either!

So why have Lamborghini treaded on this path? Buffone is quick to answer that one – 'We are not fools and we wanted to tell the EU that by launching the production car on the first day of the second quarter of 2012. We care about the environment too, which is why our car achieves a phenomenal 180 g/km of CO2 figure'. He was also quick to add that the car may also get a four-wheel drive setup, but it all depends on whether Audi prevails and gets the quattro setup in or VW stakes its right and a Haldex unit is brought in. Whatever the case might be, no one, not even Aston Martin will be fooled by the bull.