SCOOP! Is this the Bajaj small car? 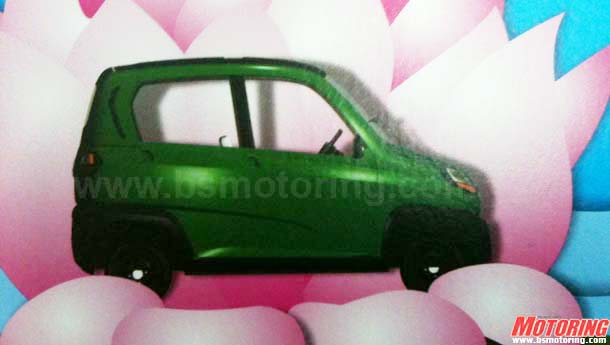 Bajaj will officially reveal its first four-wheeled application on January 3rd in New Delhi, a first in its near eight decade history. To be christened the RE60, the four-wheeler will form the basis of not just a car-like vehicle, but even Bajaj's future range of three and four-wheeler passenger and goods transport solutions.

What you see here could well be the RE60. In an official communication, Bajaj have probably given us a glimpse of what its four-wheeler could look like. At first glance, the RE60 does appear to be a car, but Bajaj has made it very clear that it doesn't intend to build another Tata Nano but its own version of what it thinks is a perfect, low-cost transportation solution.

The name RE60 is derived from the fact that the car produces a mere 60 g/km of CO2. The RE is representative of its three-wheeler genes and it's entirely possible that this one too could be rear-engined. The RE60 will be, as observers would like to put it, a three-wheeler with an extra wheel to give it better balance and rigidity as well as comfort and safety. Expect it to be powered by a two or three-cylinder petrol motor with a displacment of 700-800cc at most. Power may be on the lower side and so will top speed - the vehicle may not do more than 80 to 85 kph at best. But what this car may do is deliver good fuel efficiency, expected to be around the 30 kpl ballpark.

Developed completely in-house, the RE60 was originally conceived as the ULCC project or Ultra Low-Cost Car under a joint-venture between Renault-Nissan and Bajaj Auto. A concept was even shown at the 2008 Auto Expo but it seems the original plans have changed a fair amount since then. Bajaj has developed and will build the four-wheeler and Renault-Nissan will most likely market and sell the four-wheeler under its own name as will Bajaj. This will depend on how Renault and Nissan perceive the final product and where would it fit in its overall product portfolio.